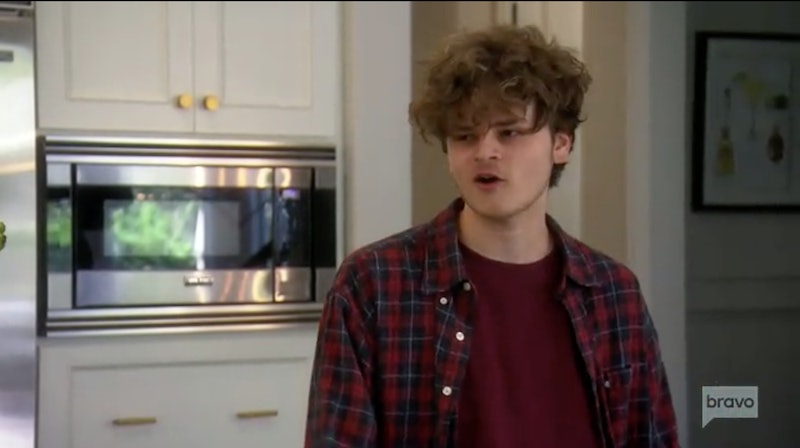 Usually, Real Housewives of Orange County centers around the drama between the cast, but Tamra Judge has a lot of tension at home. Tamra's sons Spencer Barney and Ryan Vieth are at odds because they have completely opposite political views, and it's sad to watch.

Viewers got a tease of the tension between the brothers during the Season 14 premiere episode. During a discussion from that episode, Ryan said the brothers differ because he "loves America." Tamra countered, "I don't mind loving America, but you said you were going to punch him in the face." And now it seems like fans will witness the first brother vs. brother drama in Real Housewives history. Or maybe not. These two have not appeared in the same room at this point in the season.

During his confessional interview that episode, Ryan recalled, "My brother got offended because I was for building a wall. And just because I said that he thought that I was racist."

Aside from their political differences, there is an age gap. Ryan is 33 years old and Spencer is 18 and the two of them were raised very differently. In the Season 14 premiere, Tamra shared, "Ryan was in daycare half the time while I was working two jobs. My lights were turned off most of the time. Birthday parties were 'Let's go to Chuck E Cheese.'" She added, "And now, Ryan sees all the fancy things in life that Spencer has and I think there might be a little bit of jealousy between the two of them."

And that is possible. It's a lot different growing up in the Real Housewives era. For instance, Tamra took Spencer to Cabo to celebrate his eighteenth birthday. Later, they traveled around Europe in honor of his high school graduation. Tamra theorized, "I think Ryan is the one who has to maybe come around." Somebody should. In the Sept. 10 episode, Spencer says that Ryan is "just closed-minded and he has daddy issues." (Ryan is Tamra's son with her first husband Darren Vieth. Spencer's father is Tamra's second husband Simon Barney.)

Ryan has appeared on the show since Tamra joined RHOC in Season 3 back in 2007. In the earlier years, Ryan was constantly at odds with his then-stepdad Simon. Spencer was on RHOC when he was younger, but not at all once Tamra and Simmon split. Once he turned eighteen, he was able to sign his own release forms to appear on the show, which he started doing last season.

Tamra opened up about Spencer's absence from the show with an emotional Instagram post that she shared in November 2018. She reminded fans, "The last time you saw Spencer on #rhoc was his 7th birthday." She also clarified that both parents need to sign a release for a minor to appear on the show.

Even though both of the siblings are filming with their mom this season, they're both pretty private people. Spencer has a private Instagram account and Ryan recently deleted or deactivated his Instagram.

For the most part, Tamra uses her Instagram to promote her projects, seemingly to respect her kids' desire for a more private life. The last time Tamra posted a photo with Ryan was in May 2018. Tamra's son Spencer and her daughter Sophia were in that post as well.

Tamra does share photos of Ryan's daughter Ava from time to time though. Ryan's recent custody drama with his ex Sarah Rodriguez has been very public, which could be why he is shying away from social media these days.

Overall, Spencer and Ryan may have very different political beliefs and childhoods, but they do have the same mom and a shared need for privacy. Hopefully, they can work out their differences away from the cameras.