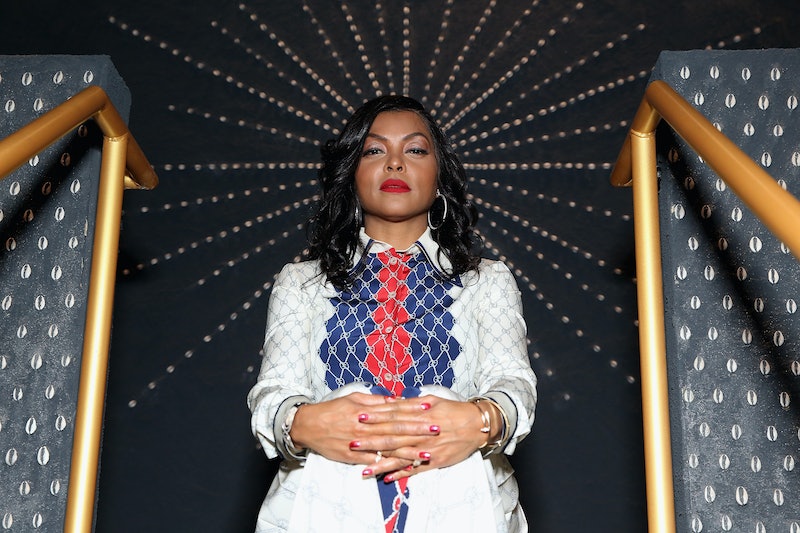 In Variety's recent Power of Women New York edition, Taraji P. Henson opened up about anxiety and depression, offering readers a candid peek into her life that will, hopefully, help to further destigmatize the topic of mental health and therapy. During her discussion with the mag, Henson shared,

"[Fame] was fun at first, but the older I get, the more private I want to be. I think there's a misconception with people in the limelight that we have it all together, and because we have money now and are living out our dreams, everything is fine. That's not the case. When they yell 'Cut' and 'That's a wrap,' I go home to very serious problems. I'm still a real human."

Admitting that her issues seem to have gotten worse over the years, the 48-year-old Empire told Variety, "I suffer from depression. My anxiety is kicking up even more every day, and I've never really dealt with anxiety like that. It's something new."

While it's unclear just how long Henson has been afflicted with mental health issues, it's worth pointing out that she's certainly endured a lot over the years. In 2003, Henson's high school sweetheart and son's father, William Lamar Johnson, was murdered and just two years after that, her father passed away from liver cancer, according to Essence. Seeking out resources to help during that difficult period, Henson told Variety that trying to find a therapist for her son, Marcel, at that time was no easy task.

"When we started doing research and I started looking for a therapist that at least looked like him, so he could trust them, it was like looking for a unicorn," she explained.

She also spoke on the topic of therapy and the overall stigma of seeking assistance for mental health, adding,

"We're walking around broken, wounded and hurt, and we don't think it's OK to talk about it. We don't talk about it at home. It's shunned. It's something that makes you look weak. We're told to pray it away. Everyone was always asking me, 'Do you have a charity?' Well, dammit, this is going to be my calling, because I'm sick of this. People are killing themselves. People are numbing out on drugs. Not everything is fixed with a pill."

The Golden Globe winning entertainer seemingly speaks from experience, revealing that she's learned to cope with her issues through the help of therapist which she sees on a regular basis. Speaking with Variety, she went on to share,

"That's the only way I can get through it. You can talk to your friends, but you need a professional who can give you exercises. So that when you're on the ledge, you have things to say to yourself that will get you off that ledge and past your weakest moments."

Although this may be one of only a few times she's gone public about her own personal struggles with anxiety and depression, it isn't the first time that Henson's used her platform to shed light on the subject. Back in August of last year, Henson announced the launch of The Boris Lawrence Henson Foundation, a mental health foundation lovingly named in honor of her dad, which she revealed will place distinct importance on changing the stigma of mental health for minorities. As part of its mission, the organization seeks to bring more understanding to the issue by providing scholarships to African-American students majoring in mental health while also offering mental wellness services to the youth in urban school districts.

There has long been a negative notion related to therapy, which has lead people to feel uncomfortable, ashamed, or guilty about seeking out treatment — particularly within the Black community. Thanks to open and honest testimonies like that of Taraji Henson's, people will now feel more comfortable with seeking out therapeutic treatment for their issues.