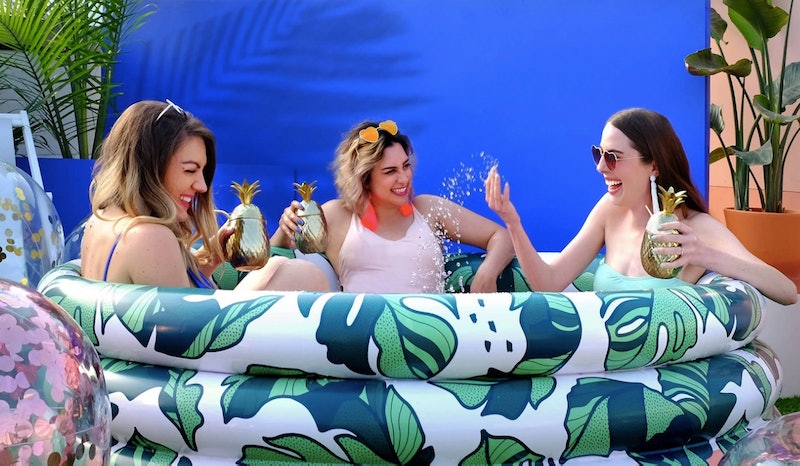 Do you smell that? Sunscreen, sugary cocktails, and — is that a hint of chlorine? That's right, summer's here. Well, let's rephrase that — summer is decidedly not here. But it will be. And Target seems to be starting that party early. The Minnidip Inflatable Pools at Target are a feast for the senses. They're colorful and, frankly, they look downright delicious — which is sort of a weird sensation to get while looking at a plastic inflatable pool, but there we go. I never interrogate my hunger too deeply.

These summer beauts were spotted by Instagrammer @targetdoesitagain, whose account is devoted to — well, it's pretty self-explanatory. These inflatable pools are perfect for an impromptu backyard soak with a few friends. They come in at 5.5 feet wide by a foot tall, so they don't take up a huge amount of room, but they're just big enough to recline and enjoy a fruity drink or cocktail of your choice. They're available in six stunning, summery designs that will have you feeling the heat, all courtesy of Emily Vaca of La Vaca. Apparently, they can fit up to three adults are good for children six and up, so you can make it a girls' night or a family affair, depending on how you're feeling. The best part? They all come in at just under 40 bucks, so you can start your summer preparations without breaking the bank. You can almost imagine the long summer nights already.

The biggest decisions with these summer delights is what flavor (I mean color) to chose from. The designs you can choose from include Squeeze The Day, a lemony option, Just Add Watermelon, which is pretty obvious, That's Banana Leaves, with a tropical feel, Dipped In Ink, which looks like a hipster tattoo, Soak In Some Watercolor, which delivers the pastel feel, and Fresh Cut, a bold and blue option. They all have those sweet summer vibes, so you'll just have to pick which one goes best with your Instagram palate.

As I sit surrounded by three-foot snowbanks, it's hard to imagine that summer is right around the corner but, darn it, it's March and Daylight Savings is about to happen — so it's time to embrace some optimism and remember that summer will come again. It will always come again, at least until global warming finishes ravaging us all. So like two or three years from now. Enjoy it while you can.

There's a lot to look forward to as the warmer weather starts to set in for 2019. There's the opening of Disney's Star Wars: Galaxy's Edge, which was just announced to be sooner than a lot of us were expecting. There's the onslaught of the US 2020 election cycle about to get into full swing. There's whatever ends up happening happen with Brexit — OK, so maybe focus on the new Star Wars park, because it looks like we may have to make our own fun this year. Open some Pearsecco pear cider and just try to forget your troubles — and now you have the perfect summer inflatable pool vehicle for some lazy day drinking. That's real summer lovin'.