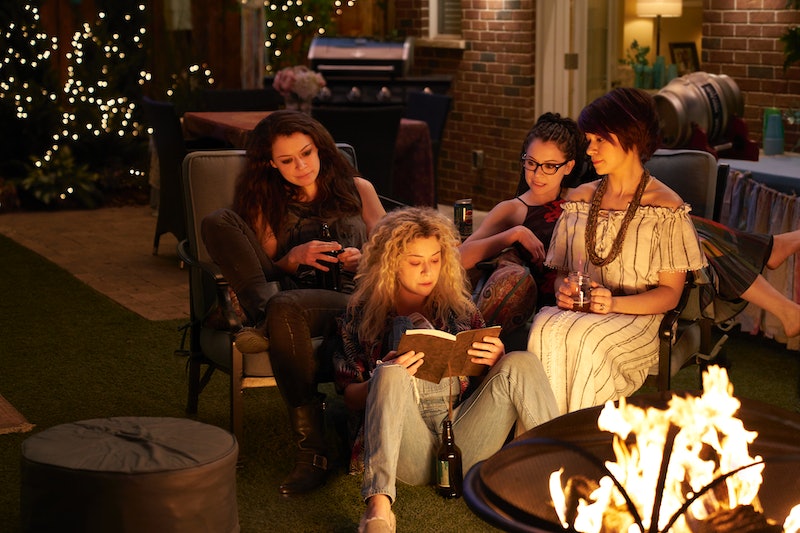 "It's definitely different," says Emmy winner Tatiana Maslany about Orphan Black: The Next Chapter, which will see the actor reprise her most famous role(s) in a completely new format: an audio series. "I was always very reverent of voice actors and always very fascinated by that process, and that was definitely something that I brought to the original work on Orphan Black: an understanding of just how sound transmits truth, or sound transmits intention, or any of that." There's one other key difference between working in a visual medium and working in a purely aural one: "I get to do it in sweatpants, man. It's the best."

Just over two years ago, in August of 2017, Orphan Black wrapped its run on BBC America after five acclaimed, award-winning seasons. But it turns out that the show's satisfying series finale wasn't the end of the line for the show's central group of sestras; their story will continue in The Next Chapter, a 10-episode audio series to be released on Serial Box, a streaming platform for serialized audio fiction, beginning on Thursday, Sept. 12.

"There's a lot in the world that can be expanded on," Maslany tells Bustle about her choice to return to the world of Orphan Black. "The writers made so many cool choices while we were doing the series that you can kind of jump off of and make an entire thing out of. But also, for me, it was just getting to make something for the fans who have always been so loyal to us — and even after the series ended have continued to be loyal — that was an exciting prospect for me, the main reason to come back to it."

Another key difference between transitioning from a TV show to an audio series is that Maslany no longer had body language to help her distinguish between her many unique characters. Maslany's performance was an incredibly physical one, with each clone moving and gesticulating and holding themselves differently. With The Next Chapter, she had only her voice to differentiate them.

"It depends how elastic my vocal cords are being and how not-rusty I am, but sometimes I record the conversations in real time, switching back and forth, which was a really fun thing to get to do," she says about her process on the audio production. "We didn't even do that in read-throughs [for the TV show], because Kathryn [Alexandre, Maslany's stunt double] would always read the other clones. There was never a moment where I was having to answer myself. So yeah, it's a new challenge, and thankfully I've done enough work on these voices that I can kind of just start to do it like that."

To Maslany, the idea of bringing Orphan Black back as an audio series made a certain amount of sense. She describes The Next Chapter as giving fans "a cool kind of internal version of the characters that we got to see from the outside for so long." This is because the series won't just feature dialogue from the clones, but also internal monologues voiced from each of their unique perspectives. "Sometimes we're in Cosima's head and potentially Delphine's head and sometimes we're in Charlotte's or Kira's head," Maslany adds.

After thinking she had said goodbye to these characters forever, which clone was Maslany most excited to revisit? You might assume the actor would be loathe to play favorites among her creations, but she had a ready answer: "I'm always excited to bring Alison back out. I love her." But one of the things that excited Maslany the most about The Next Chapter was getting the chance to create even more new clones. While the exact number and nature of these new sestras isn't known — not even to Maslany, who has only read and recorded five of the 10 scripts so far — she is willing to share a few details about one new addition in particular: an "unaware" clone named Vivi Valdez. (Minor spoilers ahead.)

"All of these characters have a real strong sense of themselves and yet there's something missing, there's something kind of intangible that they can't put their fingers on that has never felt quite right about their lives. I think that's a really relatable thing, and that all the clones have gone through that — and Vivi certainly does," Maslany teases about her newest character. "She has sort of an interesting psychological past with the idea of duplicates and clones and twins. She has imaginary friends, and now, as she's beginning to meet these women and see these women in her adult life, she's starting to question whether these imaginary friends who looked just like her were not imaginary. And I think that's an interesting take on that struggle with identity."

While Maslany doesn't know how many more new clones she and the audience may be meeting in the future, she also doesn't know how long The Next Chapter will be running. It may be a one-off event, or it may end up running for years. "I don't even know, I don't know what their intention is, I have no idea," she admits. "I guess it depends how the story rounds out; I don't even know how it ends, so I'm just as interested to see what happens there. I'm just as in the dark." Whether it runs for one season or another five, fans will just be happy to spend any time they can with Sarah, Cosima, Alison, Helena, and the rest of the sestras. It's good to have them back.

More like this
'Bridgerton' S3 Teases Exciting Social Season For Penelope Featherington
By Bustle
'Wakanda Forever' Is Already Opening Doors For Mabel Cadena
By Grace Wehniainen
The 'Firefly Lane' Book Ending Teases Way More Tears To Come In 2023
By K.W. Colyard
A 'Sex Education' Star Is Leading Your Next Fave Thriller
By Darshita Goyal
Get Even More From Bustle — Sign Up For The Newsletter