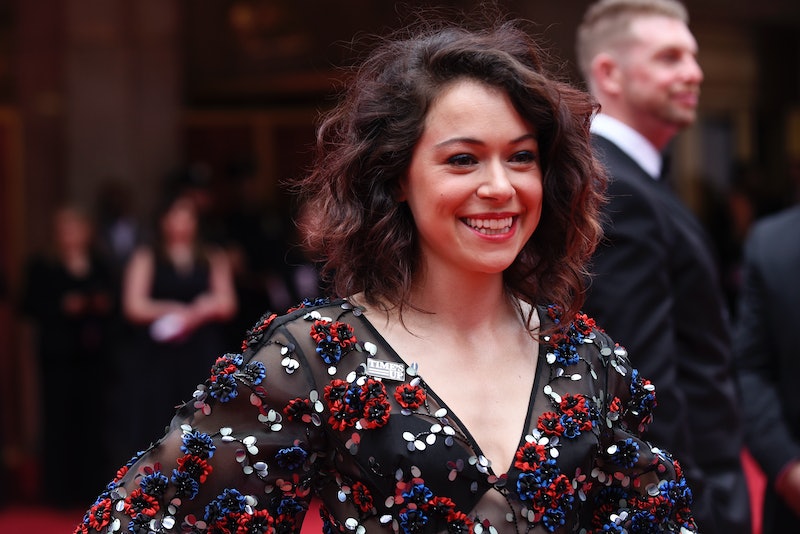 The Clone Club is about to reassemble for more adventures — just not in the way you're probably thinking. Two years after the final episode aired, it was announced that Tatiana Maslany will return in a new Orphan Black series, but there's a twist. Instead returning to TV, the new audio series will continue the story of Project Leda and the clones fighting back against the scientists who created them.

Orphan Black: The Next Chapter will be a ten-episode audio series done in collaboration with the new platform, Serial Box, centered on "continuing the story of the clone sisterhood and their allies (and enemies) after the end of the TV show," as reported by Variety. While it's incredibly likely that not all 14 of her distinct characters will appear in the series, Maslany will reprise some of the Clone Club's most famous members for the show. Most excitingly, the outlet teased that in the new episodes, #Cophine — better known as Cosima and her girlfriend, monitor and fellow scientist, Delphine (Évelyne Brochu) — "definitely plays a big part in the story."

Details about the plot of the new installment have yet to be released, but Variety did reveal that it will take place "eight years in the future from where Season 5 left off and features the same characters, all voiced by Maslany." Presumably, it might even introduce some new characters for the actor to play, as in the final episode, the Sestras uncovered the full list of all 274 clones, prompting Cosima and Delphine to set off around the world to find the clones and inoculate them against the respiratory disease they're susceptible to.

While an audio series might not be the way fans were hoping to see the Orphan Black story continue, it is especially good news considering that Maslany joked in July 2018 that she wouldn't reprise her Emmy-winning roles for a few decades, at least. "[Creator] John Fawcett joked at one point that when I’m like 70, we’re gonna do like a reunion special," Maslany said on an episode of Variety’s Stagecraft podcast. "So all the characters will be in an old age home. I’m up for that. That is logical to me. Something too soon doesn’t make sense. Let’s see when they’re geriatric!"

Despite her initial hesitance to bring Sarah and her fellow clones back, the actor was one of the first people to tease Orphan Black: The Next Chapter on Wednesday, June 11. "Wuh oh, #OrphanBlack announcement is coming this Thursday!" she wrote on Twitter. "#CloneClub, are you standing by? You're in for a treat..."

Furthermore, Orphan Black: The Next Chapter is just one way that the show's creative team plans to continue telling the story of the Clone Club. In March, Variety announced that a new show set in the Orphan Black universe was in the works. Unlike Next Chapter, however, it seems unlikely that the upcoming TV show will feature any of the Clone Club, and instead either introduce brand new characters or expand the stories of some of the show's more tertiary characters, like Better Call Saul.

Luckily for Orphan Black fans, having Maslany on board for Next Chapter means that all of the characters that they know and love will have just as much heart, humor and humanity when the story picks up once more.