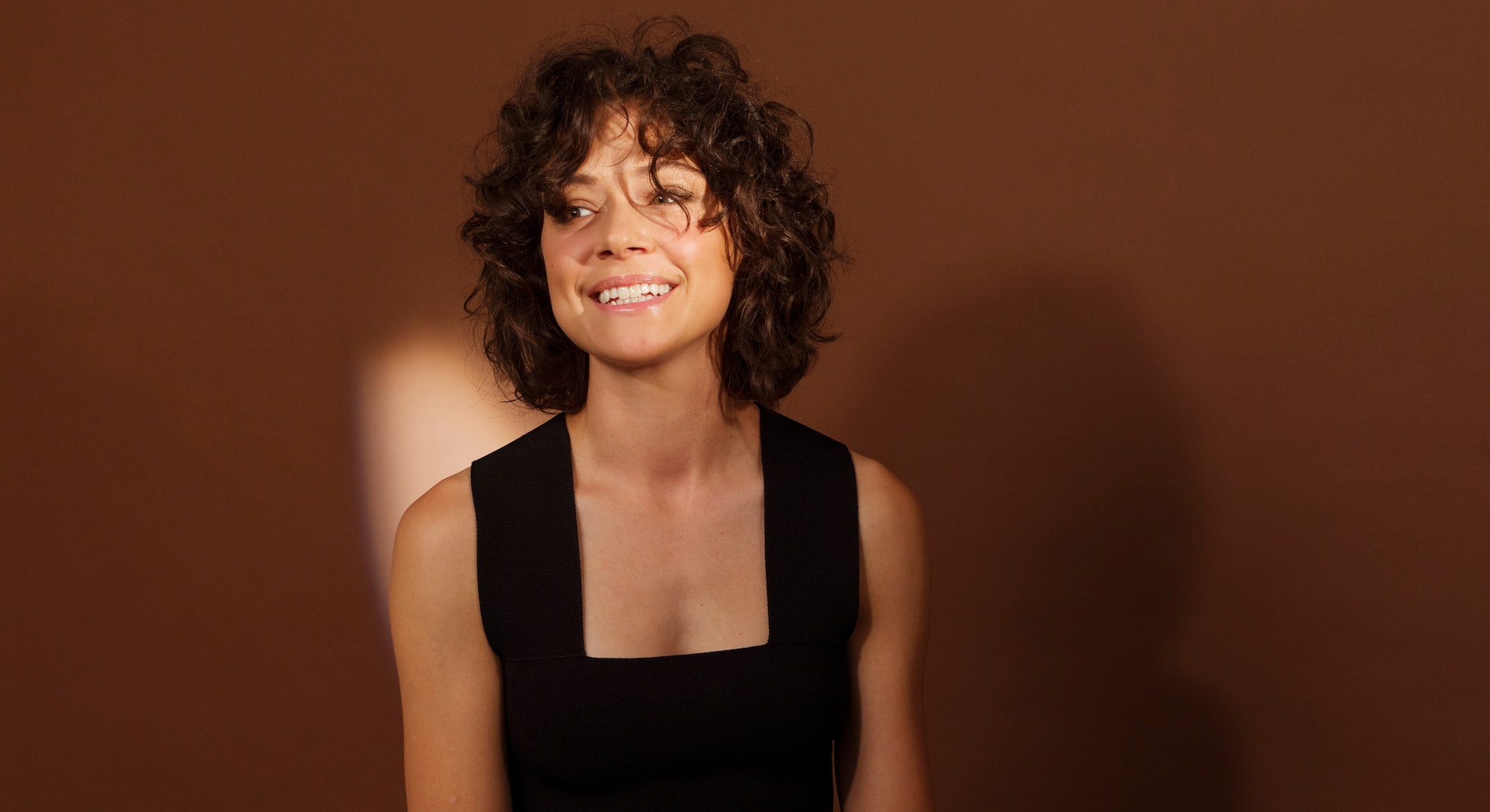 In September of 2016, Tatiana Maslany won an Emmy. To those unfamiliar with the actor or her show, Orphan Black, this might not have seemed like a particularly huge deal. But for everyone who'd spent the last several years watching Maslany deliver work stellar enough to label her, often, "the best actress on TV," the Emmy felt like a symbol: finally, finally, she was getting the kind of love and recognition her fans had always known she deserved. Perhaps after this awards night, we thought, everyone would realize how good an actor she is, and be drawn to movies and TV shows simply because she is in them — except that's not actually what Maslany really wants.

"That you can forget that this is even an actor... that is what I seek to do," she says, sitting down in Bustle's studio on a mid-September day. If Maslany sounds, well, actorly, don't be surprised; although it's no secret that she has a comedic side, as shown by her scene-stealing turn on Parks & Rec and her friendship with funny people like Amy Schumer, the 32-year-old typically has the kind of serious, introspective demeanor that goes hand-in-hand with the dark sci-fi show she's best known for.

That attitude is certainly fitting for Maslany's new movie, Stronger, a powerful, often-heartbreaking drama about Jeff Bauman, the Boston Marathon survivor who lost both his legs in the 2013 terrorist attacks. In the film, Maslany plays Erin Hurley, Jeff's on-again, off-again girlfriend, and the actor talks about Erin with a kind of quiet awe. Maslany felt a "huge responsibility" to do Erin right, she says; as soon as she learned she got the part, she began running, hoping to connect with her character on a deeper level. Whether audiences watching Stronger will sense that commitment is out of her hands, of course, but talking to Maslany, one gets the sense that if she could tell every viewer about what she's learned from Erin and why this story matters, she would. "I don’t think I’ll ever let go of this film," she says, gravity in her voice.

The afternoon we talk, Maslany is dressed for a photoshoot — her hair is styled, her outfit is precise, and her Nike sneakers are in a bag waiting for her after she's done with her impressively tall heels. I've interviewed her before, so I know what the actor's personality (at least with reporters) is like, but that doesn't mean her constant intensity doesn't still throw me off, at least a bit. She seems comfortable around journalists — doing press for five seasons of Orphan Black likely trained her well — but that comedic side, those easy laughs? Until she tells me a funny story at the end of our interview involving a chance hotel encounter, confused Hollywood agents, and Schumer naming her dog after her, that can't help but make both of us crack up, Maslany is all seriousness, all the time.

For her acting, at least, this is a good thing. In order to give the kind of performances so great, and so deep, that fans forget they're even watching her on-screen, Maslany can't mess around. What she wants, she tells me, is "where your work speaks for itself, and the awards stuff doesn’t matter — it’s more about, 'holy sh*t, this person took me on a ride and I didn’t even realize they were doing that to me.'" But for her regular life, that intensity acts a bit as a wall, at least from reporter to subject. Every time I ask her a question, she takes a few moments to think things through, and then she provides an answer that, even if natural, sounds practiced and formal. You can see that she is determined to get things right, even if it means that she sometimes comes off as enigmatic as some of the clones on Orphan Black.

For some actors, that Emmy and years worth of glowing reviews would be enough to soothe their anxiety or get them to loosen up in front of press; not Maslany, though. It goes hand-in-hand with her feelings about the way audiences perceive her on-screen, or rather, the way they don't. Maslany, she makes clear, doesn't want you to go to movies or watch television shows to see her — if she had her way, you probably wouldn't even notice she was in a piece of work until the credits rolled. During our conversation, she points to her co-star in the new movie Stronger, Jake Gyllenhaal, whose portrayal of Jeff is impressively convincing, as an example. "That commitment to one character, and so completely believing that that’s him... that’d be amazing," Maslany says with relish.

For those of you who watched her superb work on Orphan Black, it might seem like she has already accomplished just that. After all, her performances as up to four or five different clones in a single episode were so transformative that forgetting that it was Maslany playing each character became a running joke among fans. So after five years of winning every piece of acclaim imaginable, why wouldn't Maslany just, well, take a break?

Because, as just one afternoon with Maslany makes perfectly clear, "taking a break" is simply not in her DNA. Even while she was busy playing clone after clone on Orphan Black, she was starring in movies like Woman in Gold, where she spoke German as a young Helen Mirren, and The Other Half, which earned her rave reviews for her portrayal of a bipolar woman. Even now, in her post-Orphan life, she's not standing still. Maslany has Stronger and a few other films in the works, as well as an indie movie she's developing with her partner, Tom Cullen.

Clearly, lazy isn't in Maslany's vocabulary, even if her constant workload means she's always making life harder for herself than it probably needs to be. "I'm selfishly drawn to these challenges," she explains. "That’s kind of what I sign up for in a way... I’ve just never wanted to [take it easy]." Even with Orphan Black, Maslany says she had a hard time accepting the praise, because she was always convinced that she could've done something deeper, or sharper, or simply better.

"I don’t think that the noise of Orphan Black or any of that is in any way connected to what we do on a daily basis, which is always full of fear and always full of doubt and contradiction," she tells me. "I don’t super buy into the noise, because I know myself and I go, 'OK, yeah but that’s a trick, or that’s something I could’ve dug deeper into.' It’s a constantly evolving thing — I never feel like, 'oh yes, now I’m at some level that is different from where I was before.'"

Stronger, though, threw Maslany for a loop. The drama, out Sept. 22, is the biggest film the actor has done to date, and getting to star alongside veterans like Gyllenhaal and Miranda Richardson was "uncharted" territory for her. Maslany may have been up for the challenge — but even for her, the combination of playing a real person who often came to set and whose opinions she valued, and of starring in the film alongside highly respected actors, was overwhelming.

"Stepping onto set with Jake and David [Gordon Green, the director] and Miranda, I was a beginner again," she says now. "And I’m going, 'oh sh*t, OK, this is the level. I had major doubts going into that."

Maslany admits that she knew little about Jeff and Erin's story before signing onto the movie, and the details of their journey — their commitment to one another during Jeff's recovery, their struggles with the media's perception of their relationship and the unwanted fame Jeff's injuries brought — stayed with her long after she finished filming. The same can be said for Orphan Black. Talking about the series, which came to an end this past August, Maslany can't help but wax poetic. "Looking back on it now, the amount of roles I was able to play pales in comparison to the impact certain roles had on people," she tells me. "In terms of Cosima’s resonance with the LGBTQ community, young women and men, people seeing themselves represented... that to me, I think, is the legacy."

"The show sheds light on people who don’t necessarily always have a voice and gives them a voice that is complex and flawed and human," she continues. "Especially young women [who are] kind of pitched against each other and made to compete for the small spaces that we’re able to take up."

Although Orphan Black's finale might've come as a shock to fans, Maslany has been processing the show's end for years. A critical favorite but not exactly a ratings smash, Orphan Black spent five seasons as a series whose future its stars and creators could never take for granted. Yet for the actor, that constant unpredictability wasn't an issue; in fact, unsurprisingly, it feeds her. "I’ve never known what was coming down the pipeline — I’ve never known what was next," she says. "And I kind of love that. I like being surprised and seeing something and being like, 'oh god, I want that so bad.' And then fighting for it, somehow."

Right now, Maslany's future is actually pretty certain. There's the producing gig, which she's clearly excited about; although she's been a producer in the past, on Orphan Black's final seasons and The Other Half, this new film will give her more control than ever before. "It’s cool to get to have a bit of say in the development of something, to get to tell the story that we’re excited about," she says with evident happiness.

And there are all those other films ahead of her, one she's already signed on for and ones that'll inevitably come her way soon enough. Maslany may not want anyone to think of her when they watch her movies, but it'll be hard not to, with so many opportunities coming down the line. But if anyone's willing to prove people wrong and take on that kind of challenge, it's Maslany — after all, she's managed time and time again to earn our love, even while disappearing right in front of our eyes.