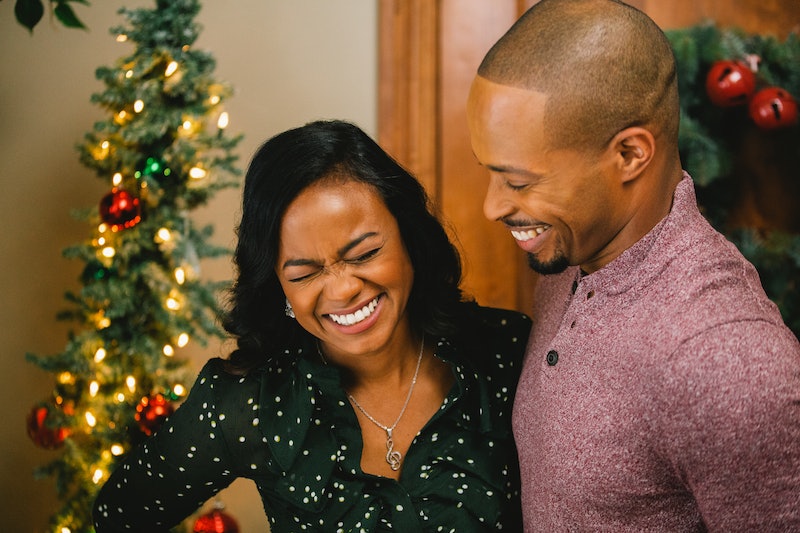 Lifetime's Christmas movie lineup is in full swing and its latest offering will give you all the nostalgia feels on top of some holiday cheer. Jingle Belle, premiering on Nov. 25, stars Tatyana Ali (yes, Ashley Banks) as Belle, a successful Manhattan-based jingle writer who is tasked with penning a special song for her Ohio hometown's Christmas concert. There’s just one big problem — the show's musical director is her high school ex-boyfriend Mike, played by Cornelius Smith, Jr. (Scandal). Jingle Belle also features Keisha Knight Pulliam and Tempestt Bledsoe, better known as Rudy and Vanessa Huxtable fromThe Cosby Show, so this new Lifetime Christmas movie is the perfect entertainment for a chilly Sunday night on the couch.

Ali previously starred in Lifetime’s 2017 holiday film Wrapped Up In Christmas and enjoyed the experience so much that she immediately started planning Jingle Belle, which allowed her to show off her singing and songwriting chops. (In case you forgot, she rocked the mic on The Fresh Prince and released an album, Kiss the Sky, in 1998, so music is a part of her creative roots.)

Now, she’s doing it again and taking charge as an executive producer for this heartwarming movie. “When people ask ‘what’s your dream role?’ I always said it would be something I can sing and act in and do all the things that I love to do,” Ali tells Bustle in a telephone interview. “And, we decided to try to figure out how we could do a musical and Jingle Belle is what came out of that.”

The film's cast is thrilling for many Lifetime fans who want diverse movies as well as those who are just tuning in to see their faves. A spokesperson for the network tells Bustle that six Lifetime Christmas movies will feature a woman of color lead, which isn't bad considering this year's total lineup is 14. The network is obviously aware that representation is important, even in lighthearted flicks like Jingle Belle. Ali believes holiday films are one uniting thread that binds people from all walks of life together, so diversity should be a part of the experience.

“I think [diverse casts are] important because holiday movies are the kind of films that everybody across the country watches and everybody can relate to because it deals with family, love, [and] loss,” affirms Ali. “And, what a great time to walk in someone else’s shoes and see what someone else’s life is like and see that it’s not so different.”

Jingle Belle was filmed this past July in 100+ degree temperatures, but the blazing heat didn’t crush the cast’s Christmas spirit as they sang and danced on set. Ali says she loved ad-libbing with the talented and all-Black ensemble cast, which also included seasoned stage and film veterans Obba Babatunde, Loretta Devine, and Valerie Pettiford, and giggled profusely about being exhausted after filming a scene where her character performed while dancing. She enjoyed every moment, especially one scene when the entire cast comes together like happy family. Ahhhh, we can feel the holiday love and warmth already.

Banks spent a ton of time at a piano with her fellow romantic lead and allowed their respective talents to mesh in an organic way to create the film’s original (and wonderfully cheerful) tunes. This relaxed creative approach made their characters' bond seem authentic as they re-connected through their shared love of music. Most people don’t create awesome Christmas songs with their ex, but they might relate to Mike and Belle’s complicated love story.

Belle is the "big city dreamer who left her roots" while Mike’s connection to their tiny town caused him to stay, but their relationship was derailed by communication issues. “They both want the best for each other but his character assumes she will be better off without him and she’s just trying to go after her dreams and also thinks 'well, he must not want to be with me and I’m gonna pull him away from everything he knows [so] it’s better if we go our separate ways,'" says Ali. "And I think that happens a lot in love where people aren’t communicating and without that communication things fall apart.”

Ali’s on-screen chemistry with Pulliam and Bledsoe is also powerful. She describes their love as sisterly and says working together was amazing and effortless because they had known each other most of their lives as '90s sitcom kids. The sister bond came in handy with Pulliam portraying Belle’s younger sister Tori while Bledsoe plays Mike’s hardworking sister Jackie. Ali hadn’t shared the screen with Bledsoe before, but she did meet Pulliam after guest starring on The Cosby Show. The pair became friends and hung out at sleepovers, so she was thrilled about their TV reunion as adults for a feel-good flick.

Right now, Ali is on chill mode for the holidays, but she's hoping there will be more Lifetime Christmas fun in her future. Until then, enjoy the music and happy vibes as Belle discovers that there's no place like home for the holidays. Jingle Belle airs on Sunday at 8 p.m. ET.

More like this
Morfydd Clark’s Party Trick Is Only Impressive To “People Outside Of Wales”
By L'Oréal Blackett and Maxine Harrison
Trevor Noah Hilariously Clapped Back At Racist Attacks On ‘The Little Mermaid’
By Brad Witter
On 'The Handmaid’s Tale,' Christine Ko Fights Back
By Gretchen Smail
'Survivor' Host Jeff Probst's Salary Per Season After 22 Years Is The Real Winner
By Hugh McIntyre
Get Even More From Bustle — Sign Up For The Newsletter