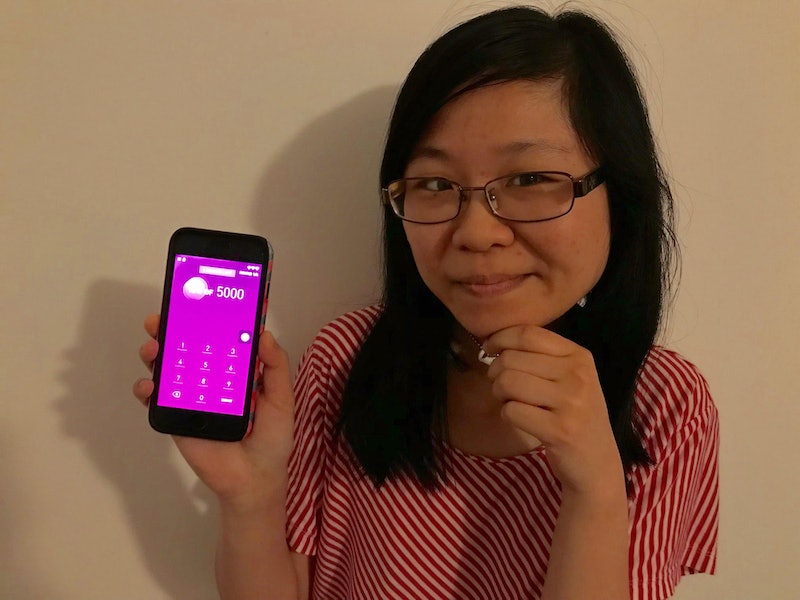 I am the first to admit that filing taxes isn't the most exciting activity in the world (well, I'm probably not the first). But here's a secret: Having filed my taxes on my own for the past few years, I've realized that, in a small way, I can use Tax Day to fight the patriarchy. Filing my taxes each year has helped me to confront my intense anxiety toward math, a subject that women are frequently told isn't their "thing."

When I started filing my taxes a few years ago, it felt terrifying. I couldn't tell the difference between the nearly 20 different types of 1099 forms out there, and I struggled to recall the donations I'd made to my alma mater and other organizations I care about. And unless you hire an accountant, it takes several hours (over the course of multiple weekends) to organize a year's worth of income and fill out a bunch of tiny boxes.

While I may not have kids or a mortgage, I do work as a freelance writer and editor in New York and have multiple income streams. That means I have to fill out a 1099-MISC form for every company I work for, even if it's just one article or a quick editing project. What if I write down the wrong figure? What if I accidentally label income as "non-employee compensation" when it was actually "royalties"?

Tax Day is about more than just "adulting" — it reminds me of everything that I've accomplished in a given year.

Math has never been my strong suit. I was notoriously bad at math as a child, and, for many years, doing any kind of task involving equations or estimations gave me intense anxiety. I used the calculator on my mobile phone for everything from restaurant tips to basic mental math, because I didn't trust my own brain. When my SAT math tutor in high school asked me to do a simple equation that I should've been able to do in my head, my chest would tighten and my hands got sweaty.

And when kids in my math class whispered to each other, hey, let's take a peek at her answers — she's Chinese, after all, I felt embarrassed. I didn't want to let them down. I wasn't the "model minority" that everyone expected me to be, which heightened my anxiety even more. I'd think: Yeah, trust me, you don't wanna be copying off of my test.

There is a misconception that women don't understand money, or that we aren't as good at math as our male counterparts. Attitudes like this at least partially explain, for instance, the gender gap in STEM fields. Women can experience an lack of confidence because they don't think they have the "math gene," which creates a self-fulling prophecy when they, well, actually do math.

As someone who's internalized a lot of math-related stereotypes about women and East Asian people, I've been there. In school, because I didn't think that I was going to do well on a math test, my anxiety interfered with my performance. When my grade was less than stellar, it further confirmed my fear that, yes, I suck at math. And if I did well on a math test, well, that was just a fluke.

When I started filing taxes, I was resigned to the idea that I was probably just going to eff it up every time. During my first year, my mom helped me a lot. We walked through the tax forms together, and she would make sure that I didn't just fill out all the right boxes — she made sure I knew why. We double checked every figure so that nothing went amiss and the IRS wouldn't come banging on my door (although the percentage of taxpayers who actually get audited is extremely small).

I now see understanding taxes in general as an empowering, feminist move.

It's been two years since I started doing taxes on my own. Since then, I've had to confront my fear of math and become my own accountant. Filing my taxes forces me to be especially organized with my income, which makes me feel like I am in control of my money. Prior to Tax Day, I get to review all of my income, tax deductions, and other compensation I might receive from doing panels, lectures and other side gigs. By doing my taxes, I've learned how to get the best tax refund as a freelancer as well as how to verify and trust my own calculations.

To me, Tax Day is about more than just "adulting" — it reminds me of everything that I've accomplished in a given year. This is an especially good practice because women are often socialized to be more critical of themselves than men, and we downplay our successes. And when we're stuck in the day-to-day grind, it can be difficult to take a step back and appreciate our financial progress and career trajectories. Tax Day allows us to do this.

There are other reasons I now see understanding taxes in general as an empowering, feminist move. I am now more interested in learning about related political issues like President Trump's tax plan and the goals behind this year's Tax March. I get to call out the egregious tampon tax that is just straight-up gender discrimination. And if filing my taxes means I get to dismantle the patriarchal structures that have boxed women into hackneyed, untrue stereotypes at the same time, I'll happily turn in my forms and await my yearly tax return.