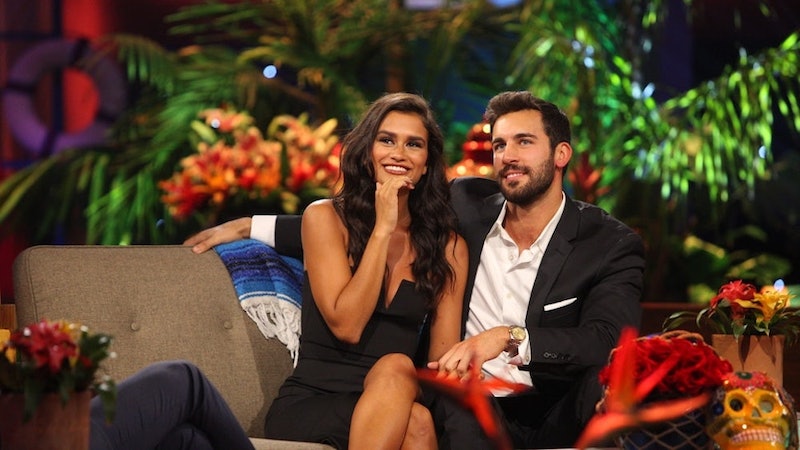 Bachelor in Paradise relationships don't always work out, but just because two people weren't right for each other before, doesn't mean they can't ultimately find their way back to one another eventually. And when it comes to Taylor Nolan and Derek Peth's BIP relationship, that romantic door may not be closed completely just yet. The topic gets broached during an upcoming episode of Taylor's podcast “Let’s Talk About It With Taylor Nolan” where the former Bachelor star got candid about a recent break up with her boyfriend and weighed in on whether or not she'd ever consider reconciling with her former fiancé.

“I have ended my no longer current relationship. I don’t know how you say that,” Taylor informed her friend, Vanessa Grimaldi, on the October 22 episode, as reported by Us Weekly. “I’m now single. ‘Canada man’ and I have decided to part ways and it was a little over a year, like a few weeks over a year. It was really a long time coming actually.” Taylor explained how she'd been unhappy in the relationship since March and knew that she deserved better than that.

The split prompted the conversation to turn to Taylor's past romances, particularly the relationship she had with Derek on Bachelor in Paradise, which resulted in the duo getting engaged at the end of Season 4.

Unfortunately, things didn't end up working out between the two of them, which prompted the pair to release a joint statement to E! News in the aftermath of their breakup in June of 2018, which read:

"It is with much sadness that we have decided to end our engagement. We put everything we could into our relationship and are heartbroken to go forward separately, but we know this is the best decision for the both of us. We will still be present in each other's lives with support, admiration and respect for each other."

But now that some time has past — and Taylor has gone on to date someone else while Derek went for another round on Paradise — Vanessa wondered if absence has potentially made the heart grown fonder. “I think there are parts of the relationship with Derek where you really do and did appreciate,” Vanessa told Taylor, who agreed with those remarks. “Parts of the relationship that maybe ‘Canada man ‘didn’t have, that Derek was able to give you.”

And while Taylor didn't go so far as to say that she wants to get back together with Derek, her recent split did help her to see some of the great qualities she feels Derek possesses. “When I look at this relationship now with ‘Canada man,’ and when I exit it, I realized … I have been craving that affection, and that it was difficult to be in a relationship and not have that affection and that it was something that I experienced with Derek,” Taylor admitted in the podcast. “And then I felt very strongly with him.”

However, before fans start clamoring for these two BiP alums to get back together, Taylor revealed that she and Derek haven't spoken for over a year and she doesn't think a reconciliation is in the cards for the two of them. That being said, a source reportedly informed Us Weekly that Taylor isn't fully against the idea. “Taylor would not rule out the possibility of getting back together with Derek,” the source told the outlet. “As they never really received closure.”

Clearly, there's a lot of uncertainty about the matter right now, but until Taylor herself comes forward, nothing can be confirmed. All anyone can hope for is that they end up finding happiness, even if it's not with one another.