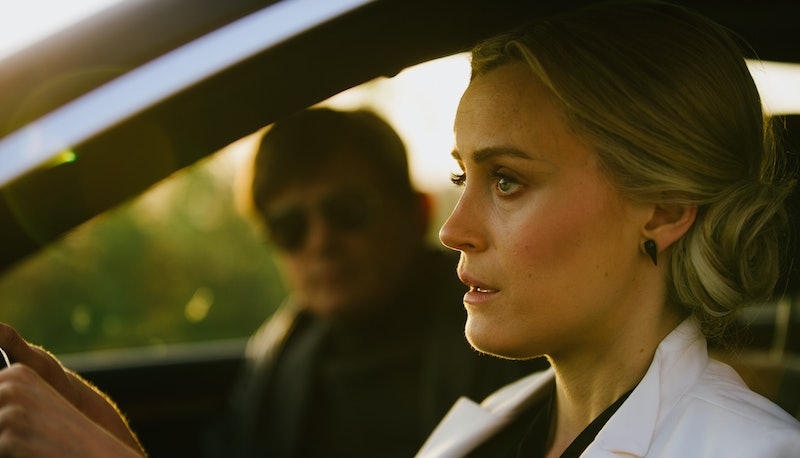 While kidnap victims are usually just that, victims, the movie Take Me explores what happens when people actually want to be kidnapped. In the film, a Tribeca Film Festival premiere, Ray Moody (Pat Healy) is the man behind Kidnap Solutions — a company that kidnaps clients to offer them the thrill of being out of control or to help motivate them through fear to battle things like addiction. After Ray gets a call from Anna St. Blair (Taylor Schilling) requesting an elaborate scenario for her own kidnapping, he plans accordingly, but when he captures Anna, she claims to have no idea who Ray is or why he has taken her hostage. Where the movie goes from there, with Anna often becoming more of a power force than Ray, not only makes for a compelling time, but switches up gender roles in an unconventional and fascinating way.

"She definitely, I think in the movie, holds the more masculine energy," Schilling says of Anna, sitting down with Bustle on an April day in New York. But Schilling is quick to indicate that the distinction between masculine and feminine has "nothing to do with gender," since she believes that "masculine and feminine energy is totally divorced from gender" — and that's something that Take Me proves in its portrayals of Ray and Anna. "It's very much removing masculinity away from gender and sexuality. I think that that's kind of one of the things that the movie played with," Schilling says. "It 'degendered' masculinity and femininity."

Although Schilling is best known for playing an actual prisoner as Piper in Netflix's Orange Is the New Black, Anna is not content to stay Ray's captive — even when he tells her he only captured her because he was hired to do so. Many of his other clients may be intimidated by him, but Take Me shows that Ray's life is a mess, which is something that Anna seems to know intuitively and zeroes in on fairly quickly. "He's kind of like this weird idea of old school masculinity, and he can't even pull that off," Schilling says of Ray and his kidnapping tactics. "And she's like, 'I'm gonna turn this on your head cause you're not good enough at it, so I'm going to show you what it looks like to be good at it.'"

In order to win the battle against him, Anna preys on Ray's insecurities — like pointing out his very apparent wig or saying he's bad at his job. Ray may be "emotionally invested" in this kidnapping, Schilling says, but he is "very shaky about what he wants, and he's totally unsure." All of Anna's manipulation tactics allow her to get inside Ray's head, and impact him emotionally.

For Schilling, filming Take Me required her to take part in a number of physical face-offs with Healy's character. "I just felt like She-Ra — blasting through my days," she recalls with a smile. The character's unwillingness to back down emotionally or physically shows that Anna isn't what women are unfortunately often portrayed as in movies — a victim. While it's unclear for much of the movie whether she orchestrated the kidnapping scenario herself or is truly unaware, her behavior makes it clear that she won't go down without a fight. "I ... like how [the movie] flips this idea of damsel in distress on its head," Schilling says.

Female characters being dominant is rare enough, let alone when one is in a position of such vulnerability as Anna is in throughout Take Me. But the film's exploration of who is in control and who is being controlled makes for a totally unique ride. "For me it was just so exciting," Schilling says about the film. "I fired on so many levels of things that interest me." And when Take Me is released in limited theaters and on iTunes and all digital VOD platforms on Friday, May 5, you'll see how that fire fueled Schilling's captivating performance.