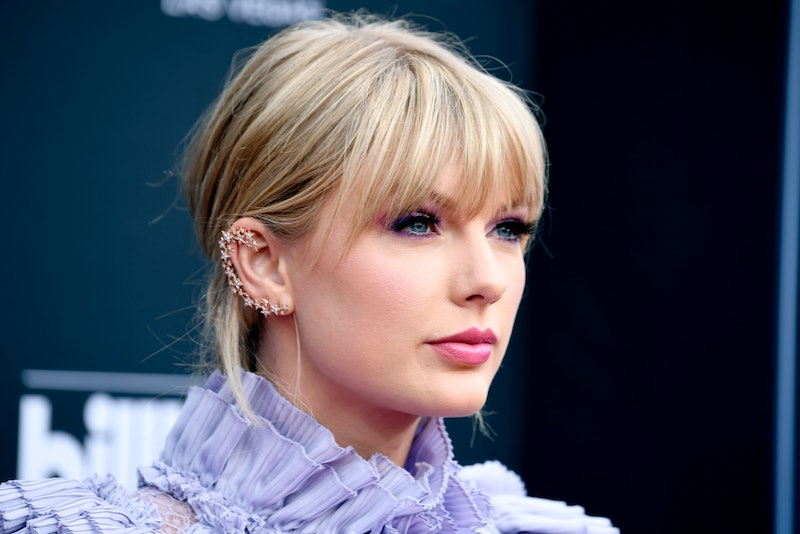 Taylor Swift used to shy away from politics, but at this rate, she may end up becoming an important influence during the 2020 election. In her new Rolling Stone cover story, Taylor Swift made clear she doesn't want to be a conservative symbol, so she's opening up about her politics. She even confirmed that the political landscape was an underlying influence on her new album Lover.

Just like in her work, with songs like "You Need to Calm Down" and "Miss Americana" carrying political undertones, Swift is also bringing that subject matter into her interviews. She spoke with Rolling Stone about her growing interest in politics, and even addressed the fact that her former silence inadvertently led to some right-wing organizations holding her up as a conservative symbol. According to NPR, white supremacist groups argued that Swift's blue eyes, blonde hair, and most importantly, her silence, were signs that she secretly aligned with them, but couldn't reveal this to the public due to fear of intense backlash.

According to Swift, she wasn't aware of this dangerous trend until later, but she's adamant that she completely disapproves. "I didn’t even see that, but, like, if that happened, that’s just disgusting. There’s literally nothing worse than white supremacy. It’s repulsive. There should be no place for it."

Going into the 2016 election, Swift also received a lot of criticism from many liberals for failing to publicly endorse a candidate. However, the singer is now explaining that the only reason she didn't get involved was because she feared it would backfire against both her and Hillary Clinton, due to her then slightly tarnished reputation. "It’s a very powerful thing when you legitimately feel like numbers have proven that pretty much everyone hates you. Like, quantifiably," she told Rolling Stone. "That’s not me being dramatic. And you know that."

If her political leanings used to be unclear, now she's making an effort to speak out as a Democrat. Swift made headlines back in November 2018, prior to the midterm elections, when she endorsed Democratic candidates in her registered state of Tennessee after years of political silence. And she's also speaking out against President Trump and learning as much as she can, telling Rolling Stone, "I keep trying to learn as much as I can about politics, and it’s become something I’m now obsessed with, whereas before, I was living in this sort of political ambivalence, because the person I voted for had always won."

In fact, she was so affected by the election that it resulted in "Miss Americana & The Heartbreak Prince," a standout track on her new album Lover. Her most political song yet, "Miss Americana" tells the story of the patriarchy, the election, and current social turmoil through high school metaphors. As Swift herself pointed out to Rolling Stone, "I have that line 'I see the high-fives between the bad guys' because not only are some really racist, horrific undertones now becoming overtones in our political climate, but the people who are representing those concepts and that way of looking at the world are celebrating loudly, and it’s horrific."

Now, she's determined to do as much as she can to get Trump out of office in 2020. "I’m just focused on the 2020 election," she concluded. "I’m really focused on how I can help and not hinder." Lover might be Swift's most political album yet, but from the sounds of it, it won't be her last.