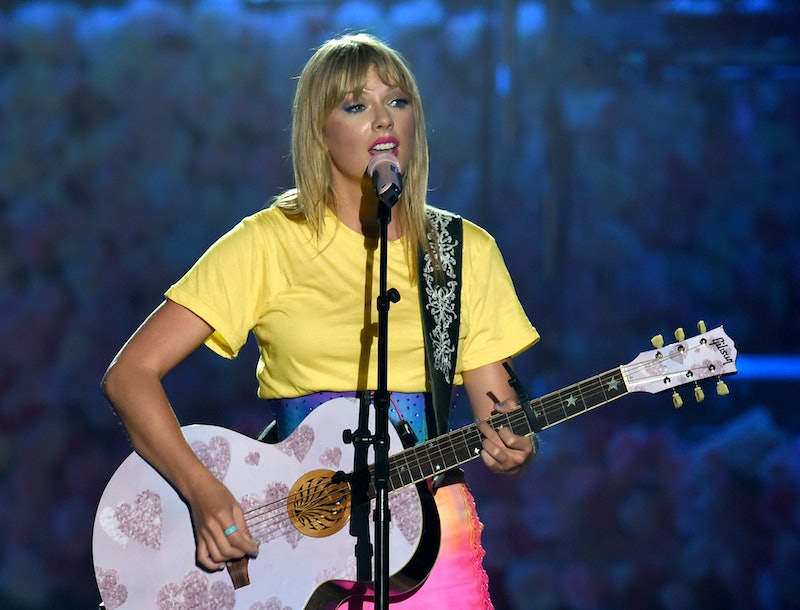 Taylor Swift's newest album, Lover, features lyrics about her relationship with Joe Alwyn, digs at the patriarchal music industry and perhaps most surprisingly, some of her most overtly political work in her career. And the "Miss Americana & The Heartbreak Prince" lyrics are her most political, featuring Swift mixing her views on the current state of the United States with a metaphor of an All-American high school couple.

Swift gave fans an insight into her inspiration for the song via Spotify's Love, Taylor: Lover Enhanced Album, where she shared notes and messages for listeners to read while playing to the album. "This song is about disillusionment with our crazy world of politics and inequality, set in a metaphorical high school," Swift explained of "Miss Americana & The Heartbreak Prince." She continued, "I wanted it to be about finding one person who really sees you and cares about you through all of the noise."

Fans on Reddit quickly began dissecting the "Miss Americana" lyrics to find their political undertones, with one popular post noting that the references to "painting the town blue" and her team "losing" are likely meant to be signify Hillary Clinton and the Democratic Party's loss in the 2016 election. "'American glory faded before me/Now I'm feeling hopeless' [and] I saw the scoreboard/And ran for my life' [are] referring to the outcome of the 2016 election," Reddit user gemi29 wrote.

As Reddit user jregike also noted, the song isn't just a metaphor for the 2016 Presidential election, but also chronicles Swift's decision to make her political beliefs known after years of keeping silent. "Also she sings how she's more patriotic now than when she was 16, and she's sad how the American dream and things that make the US great are being destroyed by the bad guys," the user wrote, referencing the song's opening lines, "You know I adore you, I'm crazier for you/Than I was at 16."

In March, the singer explained in an essay for Elle that she didn't feel comfortable sharing her political beliefs with her fans until she was an adult. "I'm finding my voice in terms of politics," Swift wrote. "I took a lot of time educating myself on the political system and the branches of government that are signing off on bills that affect our day-to-day life."

She continued, "I saw so many issues that put our most vulnerable citizens at risk, and felt like I had to speak up to try and help make a change. Only as someone approaching 30 did I feel informed enough to speak about it to my 114 million followers." The song highlights the journey that Swift felt she needed to embark on, from wide-eyed teenager "lost in a film scene" of what she thought the U.S. was to deciding to "fight" for the causes she believes in.

"Miss Americana" also seems to take a dig at President Trump in the second verse, when Swift sings "American stories burning before me/I'm feeling helpless, the damsels are depressed/Boys will be boys then, where are the wise men?" In 2016, a recording of the then-presidential candidate leaked in which he described his sexually forceful behavior, bragging that "when you’re a star, they let you do it." The comments were dismissed by Trump's supporters as "locker room talk," which is similar to the common "boys will be boys" defense that is often used to excuse male behavior. The president took a stab at Swift's music in October 2018, after she had endorsed Democrat Phil Bredesen for Tennessee Senate, so it's not surprising that she would include politicians like him as one of the reasons to be "disillusioned" with the state of the country.

Near the end of the song, Swift sings, "I'll never let you (Go) 'cause I know this is a (Fight)/That someday we're gonna (Win)," which she explained via Spotify is her "twist on the 'Go! Fight! Win!' chant." However, it can also be seen as the singer's declaration that she won't stop fighting for what's important to her — whether that's LGBTQ+ rights and equality or encouraging young people to vote.

Back in May, Swift told a German website RTL that there would be "political undertones" on Lover now that she felt that she could no longer keep her thoughts to herself. While the singer may have disguised some of the more overt political statements in a song about high school romance, fans are interpreting "Miss Americana & The Heartbreak Prince" as a bold and unapologetic statement about Swift's politics, and it couldn't come at a better time.

More like this
Everything To Know About Taylor Swift’s 10th Studio Album, 'Midnights'
By Grace Wehniainen and Jake Viswanath
Taylor Swift Wants To Direct A Movie Next — But You Might Have To Wait
By Radhika Menon
Mel C Wants You To Know That Margaret Thatcher Wasn’t A Spice Girl
By Darshita Goyal
Twitter Is Freaking Out Over Rihanna’s 2023 Super Bowl Halftime Show Announcement
By Stephanie Topacio Long
Get Even More From Bustle — Sign Up For The Newsletter