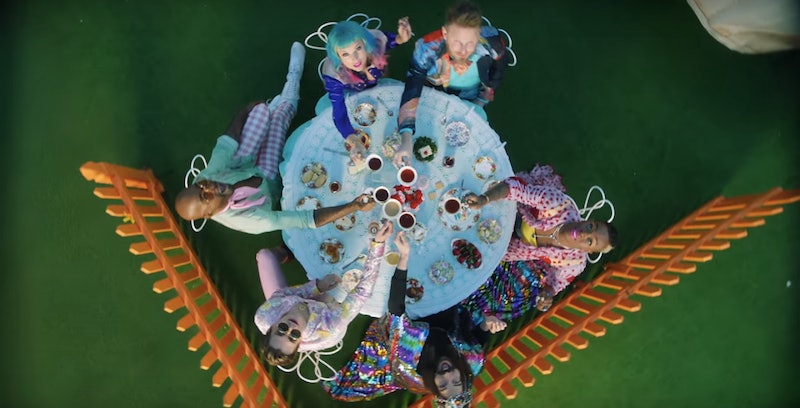 Music videos nowadays have become huge productions for fans to consume only a few minutes of visuals. And while props and costumes usually go back into plastic after everything is said and done, the cast of Taylor Swift’s “You Need To Calm Down” video were able to keep every last piece of their over-the-top outfits.

Without a doubt, Swift included some of the most outrageous looks for her Pride celebratory video that featured everyone from her friend Todrick Hall to fellow pop queen Katy Perry. Also in the video starred the Fab Five, and Queer Eye’s Antoni Porowski spilled all the tea in an interview with House Beautiful about how T-Swizzle swindled paparazzi to keep the video on lock and swiped the costumes for her cast.

"Taylor gifted us the outfits that we wore," Porowski said. "So now I am the proud owner of bright pink latex Margiela pants. And a very billowy pink shirt with a bunch of felt on it."

Details, if anything, are Swift's forte when it comes to create all of her larger than life music videos. And for this super colorful LGBTQ-inspired video, she wanted to ensure everyone was comfortable shooting in their looks.

For another Queer Eye king, it was inevitable to keep his costume after the video shoot wrapped. Jonathan Van Ness spoke in an interview with Vanity Fair that he wore pieces from his actual closet in the video. For Van Ness and his bold wardrobe choices it's no shocker that he needed no costume consultation for an over-the-top music video outfit.

“I had this little Fosse vibe when I arrived," Van Ness said. "I had on a little black crop top and tights and with heels—I just happened to be wearing that on that day. But that cape and that hat was certainly not mine. It was from the costume department. I just thought it was hilarious that what I was already wearing just so happened to be perfect to complement what I wore on the shoot. Taylor liked it. She wanted everyone to wear something they felt comfortable in.”

Swift has gone to great lengths to provide eccentric looks for the people she casts in her music videos. In 2015, Swift premiered her star-studded women-only music video (minus Kendrick Lamar's verse) for "Bad Blood" where 36 outfits were featured. Plus, they just casually came from a sex shop.

Needless to say, Swift's got some interesting ideas with what she decides to do with her costumes and props for her music videos. But if she didn't do things so unconventionally, no one would wonder how she puts out videos that appear to go off without a hitch.