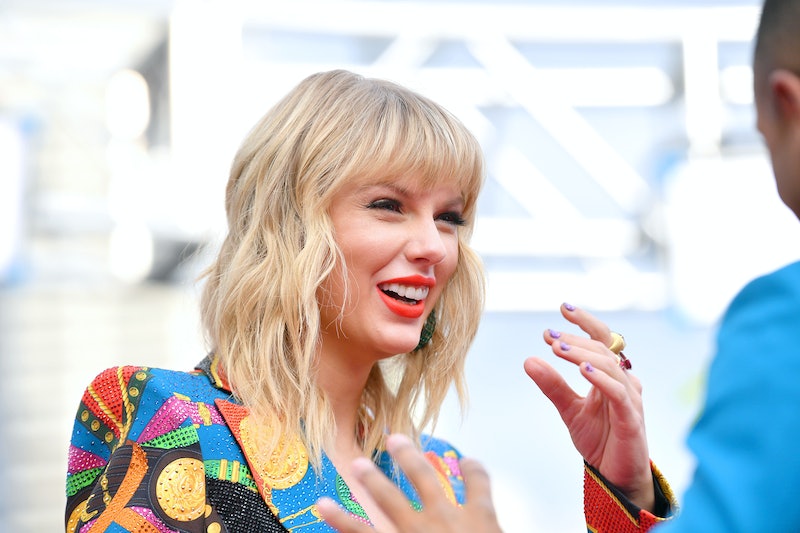 It's the biggest award of the night at the MTV Video Music Awards, and this year the Moon Person for Video of the Year went to an artist who has certainly made their mark in the history books. Fresh off the release of her seventh studio album, Lover, Taylor Swift won the Video of the Year at the 2019 VMAs for "You Need To Calm Down, which also took home

Swift beat out 21 Savage ft. J. Cole's "a lot," Ariana Grande's "thank u, next," Billie Eilish's "bad guy," the Jonas Brothers' "Sucker," and Lil Nax X ft. Billy Ray Cyrus' "Old Town Road (Remix)" to take home the Moon Person for Video of the Year, and she made sure not to let her victory go to waste. After letting her co-executive producer, and co-star and friend, Todrick Hall take the mic to accept the Video For Good award for "YNTCD," Swift used her acceptance speech to promote the Equality Act.

When Swift released the video for "You Need To Calm Down" in June, she included a call to action for fans to sign her petition to encourage the Senate to take a vote on the Equality Act. The Act, which was passed by the House of Representatives, would essentially put into place legal protections for LGBTQ people against discrimination in schools, the workplace, and housing. As of the night of the VMAs, the petition has over 500,000 signatures. Or, as Swift put it in her speech, the petition has "five times the amount it would need to warrant a response from the White House." She then proceeded to take a look at a fake watch, officially transitioning into this new era of political Taylor.

This win was especially memorable for Swift, who thanked her fans for voting for her for this award. "I first want to say thank you to the fans, because in this video, several points were made," she said, referencing the celebration of PRIDE and the LGBTQ community in the video. "So you voting for this video means that you want a world where we are all treated equally under the law, regardless of who you love, regardless of how we identify."

Swift went on to thank her cast, many of which she brought up on stage. "I love my cast, I am so grateful to everyone who was in this video. The ones who are here, the ones who are at home, we love you so much. Thank you for doing this so much." She went on to thank Hall and her co-director Drew Kirsch before bringing it back to the LGBTQ stars she featured in her "YNTCD" video. "My cast live their lives so authentically. Thank you for being the example that you are. I love you guys so much. Thank you MTV for lifting up this point and this video. We love you."

Earlier in the night, Swift performed "You Need To Calm Down" with the help of some of her co-stars, including Dexter Mayfield and the drag queen who played Swift herself, Jade Jolie.

Swift's "You Need To Calm Down" clearly connected with fans. And the fact that the singer keeps using her hit song to speak out in support of the LGBTQ community just makes all of her success that much sweeter. Love her or hate her, but Swift is using her platform to enact real change, and, well, we're not going to calm down about that.