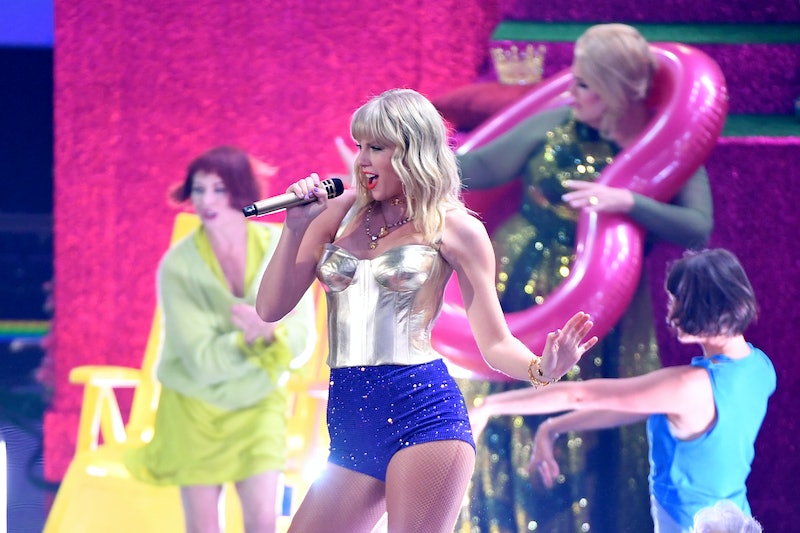 Swifties everywhere are having a hard time staying calm right now, thanks to Taylor Swift's 2019 MTV VMAs performance, which opened the show on Monday night. The singer kicked things off with a technicolor performance of "You Need to Calm Down" just three days after releasing her highly anticipated seventh studio album, Lover.

For her big performance, Swift was joined by her one of her closest friends, Todrick Hall, along with several of the drag queens who appeared in her music video, as well as Tatianna and RuPaul's Drag Race All Stars 4 winner, Trinity the Tuck. Between the joyful choreography, the colorful costumes, and all of the celebrity cameos, Swift seemed to bring her video to life on the VMAs stage, much to the delight of fans in the audience and at home.

In true Swift fashion, however, she wasn't just content to perform one song; the singer soon pulled out an acoustic guitar and treated the crowd to a romantic rendition of her newest single, "Lover." With soft lighting and fans everywhere waving lights in the air, it's no wonder that some of the stars at the VMAs started slow dancing to Swift's performance. And they weren't the only ones feeling the love, based on the reaction on Twitter:

Swift's performance marks the singer's first time on the VMAs stage since her 2015 rendition of "Bad Blood." This year, Swift earned a whopping 10 VMA nominations — 7 of which are for the candy-colored clip for "ME!" featuring Brendon Urie — including Video of the Year, Song of the Year and Video For Good.

The singer's return to the VMA stage comes 10 years after she was infamously interrupted by Kanye West in 2009, after the rapper hopped on stage during Swift's acceptance speech for Best Female Video. "Yo, Taylor, I'm really happy for you," West said after taking the microphone from the "You Belong With Me" singer onstage. "Imma let you finish, but Beyoncé had one of the best videos of all time!"

West's interruption quickly became a part of pop culture — Swift performed a song inspired by the situation at the VMAs the following year — and was at the center of the pair's reignited feud in 2017. As part of the deluxe edition of Lover, Swift shared journal entries from some of the most pivotal moments in her life and career with fans, allowing them to see in 2019 how she really felt about the interruption shortly after it became headline news.

"Ahh… the things that can change in a week…" Swift wrote in a diary entry dated Sep. 18, 2009, a week after the VMAs. "Let's just say, if you had told me Kanye West would have been the number one focus of my week, the media, and my part in the VMAs I would've looked at you crossed eyed. [...] And if you had told me that one of the biggest stars in music was going to jump up onstage and announce that he thought I shouldn’t have won on live television, I would’ve said ‘That stuff doesn’t really happen in real life.’ Well… apparently…. It does."

Ten years later, it seems unlikely that Swift will ever have to worry about being interrupted on the VMAs stage ever again, and no matter how many Moon Person trophies she takes home tonight, it's clear that the singer is happier and stronger in 2019 than she has ever been.