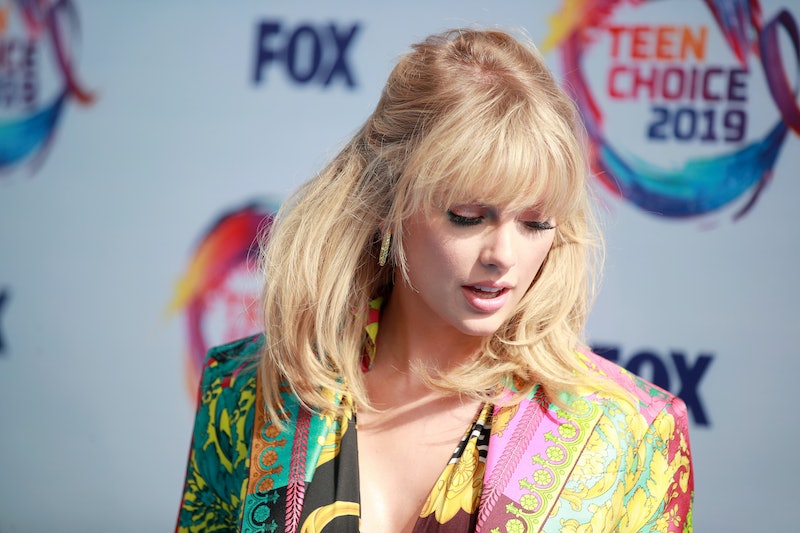 Taylor Swift will drop her new album Lover on Aug. 23. Her latest appearance promoting the record found the singer stepping out in a super fun and summery ensemble. Taylor Swift's 2019 Teen Choice Awards outfit consisted of a rainbow-colored romper by Versace that was way different than her usual red carpet style. Indeed, a new T. Swift album is always good news for her fans, who want to devour every single note and lyric. A new T. Swift album is also good news for fashion watchers who love to copy her style, since she hits a lot of red carpets to help spread the word about her latest collection of songs.

At the 2019 Teen Choice Awards held on Aug. 11, Swift received the first-ever Icon Award. She was also nominated for surfboards in several other categories. So of course she had to look smashing at the ceremony. The singer opted for a multi-colored outfit comprised of a blazer and shorts. She paired the patterned outfit with red lace-up shoes by Kat Maconie, according to ELLE.

Swift's outfit was bright and bold, thanks to the pattern and the green, pink, red, and yellow pops of color. She wore her hair in a half-up, half-down, and wavy 'do that framed her face and had tons of volume at the crown. Her coif added some mod energy to her overall presentation. Her signature bangs were extra long and grazed her eyelashes.

The "ME!" singer also ditched her iconic red lipstick in favor of a soft pink shade. She finished the ensemble with a pair of blinged out gold hoops. While the Lover era thus far has been marked by lots of pastel hues and soft, airy outfits, Swift was a bit more adventurous at this particular event. She was all about that dynamic print and color.

Swift is a well-established fashion icon with a signature style. At the beginning of the promotional cycle for Lover, she announced that she would be partnering with designer Stella McCartney for a fashion collaboration. Further details about the Swift x McCartney collection are still TBD as of press time. However, Swift's killer outfit at the 2019 Teen Choice Awards certainly has fans excited to see her next set of fashion moves.

Here's a look at the last time Swift showed up at the Teen Choice Awards — all the way back in 2014. She went with a two-piece, mint green outfit with bright yellow heels. The dress had some cool contrasts with the black straps of the cropped top, the print, and the panel and trim of the skirt.

The singer opted for a soft and sheer white mini dress at the 2012 TCAs. She paired the flowing and ethereal frock with pink lips, as well as nude, open-toed slingbacks and an updo with side-swept bangs. It was a lovely and romantic look through and through.

At the 2011 TCAs, Swift channeled Marilyn Monroe by rocking a halter neck white dress with a full skirt that was inspired by the famous subway grate scene in Seven Year Itch. Swift added metallic heels and a jewel-encrusted belt.

Swift certainly switched things up for the 2019 edition of the Teen Choice Awards. Her multi-colored romper and blazer were a clinic in "glamsual" aka casual chic. She remains one to watch on any red carpet.