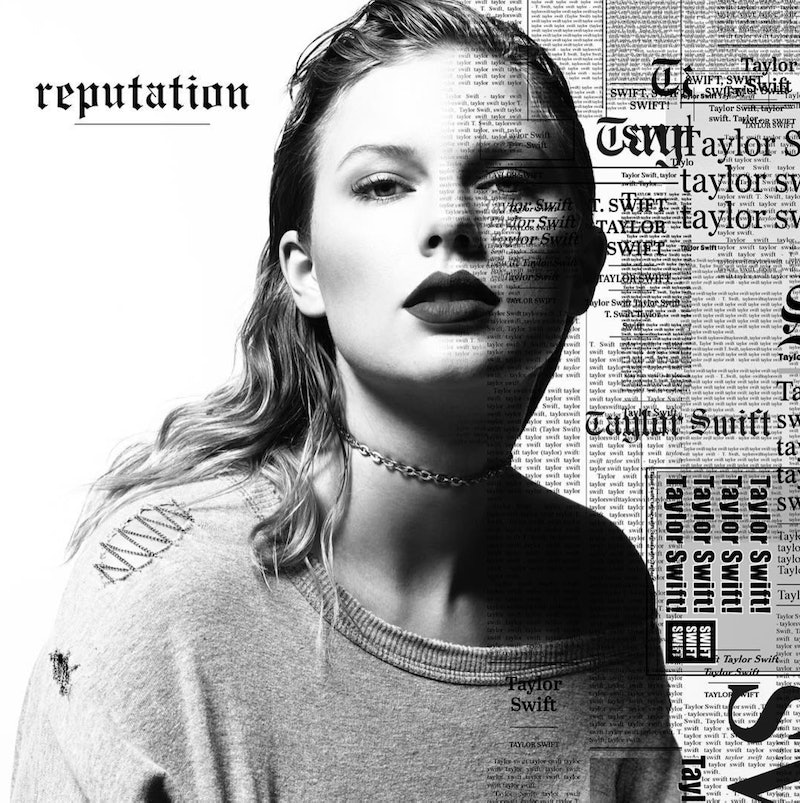 Taylor Swift fans had a meltdown on Aug. 23 when their queen's Instagram began showing little hints of a new project coming along. As the day progressed, the world found out not only that Swift is coming out with a new album, but art was released, too. Taylor Swift's choker on her Reputation album cover is sparking some rumors about its hidden meaning.

A little history on Swift's accessory game: Back in Oct. 2016, fans were also freaking out over the singer wearing a choker onstage. In fact, Swifties pointed out that whenever she changes up her sense of style, it means new music is coming. In the past, Swift has used her fashion choices to convey a message, so it's not so far off that her chosen piece of jewelry on her new album cover means something, too.

Sure, the printed headlines probably represent all of the articles, think pieces, Tweets, captions, etc. that have been printed or written about her online. The black and white, stripped down look most likely represents what this album will explore: her true self.

But what about that chain choker?

OK, yes, it's a cute, trendy accessory, but it probably means so much more. A guess? How the media and entertainment industry has suffocated her the past few years?

Reputation, which will be released in November, looks like it's going to be an album all about the drama of last year. Gone are her hundreds of Instagram posts of her 4th of July parties and hangouts.

To replace them, she started with three videos, creating one image of a snake. And, if you're lost on what that means, here's the breakdown: Swift has been rumored to have beef with a few different celebrities, and thus was born #TaylorSwiftIsASnake.

This hashtag took off after the Kim K and Kanye West versus Swift drama really unfolded. So, the videos on her Instagram of the hissing snake and name of the album mean, pretty obviously, that the album will tackle the issues she's run into with her reputation.

Prior to all the drama that Swift ran into, her social media channels constantly showed off her girl squad and all of the fun they were having. Then, as controversies sparked, her posts became less and less frequent, until she would barely post anything new at all.

And then, it went blank.

Swift deleted every single post and unfollowed everyone. She even deleted her profile photo. And slowly, she began dropping hints of the album, including when her first single would be released (it's Aug. 24).

Perhaps Swift felt that she had been caged up by the media and speculative stories written about her. A narrative she would very much like to be excluded from. The choker in the image is quite literally choking her.

Fans on Twitter have fixated on this piece of jewelry and what it means for the type of music she's releasing.

Could definitely see that....

Whatever it means, it has people excited.

Regardless of what it means, it sure is garnering a lot of attention from people, fans and haters alike.

The world may never know. Or, maybe she'll address it directly in her new album. Either way, the choker, wet hair, and red lip are a strong look. One that seems to be a complete 180 of her other styles. It's a new era for Swift's style and music, apparently.