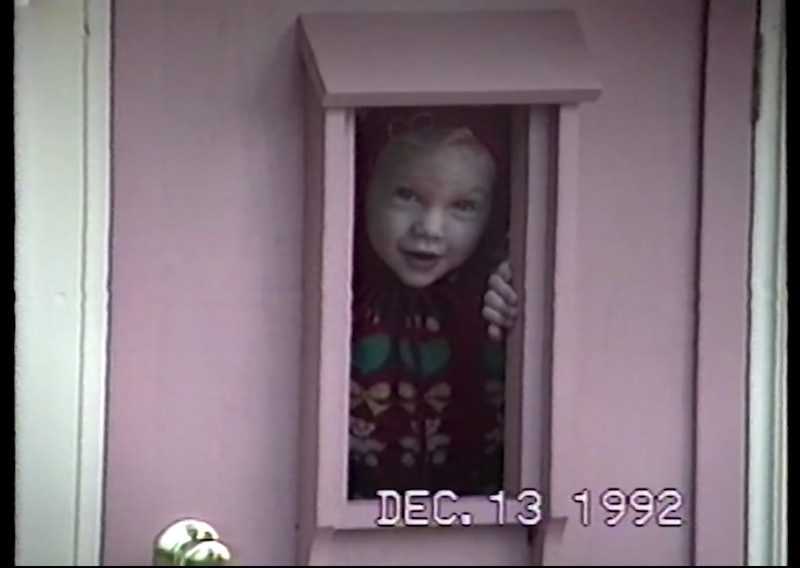 Merry Swiftmas to all — and to all, a brand new, nostalgic Christmas song to enjoy. On Friday, Dec. 6, shortly after she revealed to her fans that she had written a surprise holiday song, Taylor Swift released "Christmas Tree Farm," complete with a nostalgic music video, which featured actual home movies from the singer's childhood Christmas celebrations. The night before its release, Swift revealed on Instagram that she had "just written a Christmas song" and didn't want to "wait a year to put it out," and so "Christmas Tree Farm" was released in true Swift fashion: as a surprise gift to all.

In the upbeat, cheery song, Swift sings about escaping the "stress" and "holiday shopping traffic" that comes with December by returning to the idyllic Christmas tree farm of her youth, to celebrate the holidays with her loved ones. However, while the singer might not be able to literally return to the farm where people "dance under sparkling lights," being with her love by the fireplace helps bring the Christmas spirit back to her. "Just bein' in your arms / Takes me back to that little farm/ Where every wish comes true," Swift sings in the chorus.

While there's no lyrics that hint that the person who reminds her "of home" is her longtime boyfriend Joe Alwyn, it's clear that the holidays are a time of love and celebration for Swift. The home movies are proof, giving fans a glimpse at the happy times of her younger self and her family opening presents, playing in the snow, and meeting Santa Claus. (There's even a shot of young Swift unwrapping what could be her first guitar.)

As the singer explained in a post on Instagram, Swift "actually did grow up on a Christmas tree farm," as a child in Reading, Pennsylvania. "I had the most magical childhood, running free and going anywhere I wanted to in my head," she told Rolling Stone back in 2009 about growing up on the Pine Ridge Farm. A few years later, Swift explained that her "weird" upbringing is part of the reason why she loves the holiday season so much. "It has cemented in me this unnatural level of excitement about fall and then the holiday season," Swift told Esquire in 2014. "My friends are so sick of me talking about autumn coming. They’re like, 'What are you, an elf?'"

Though Swift didn't literally grow up "in a gingerbread house, deep within the yummy gummy gumdrop forest," as she joked on Instagram, it's clear that her childhood on a Christmas tree farm played a big role in shaping her love of the holidays and Christmas traditions. With the release of "Christmas Tree Farm," it's likely that Swifties everywhere will continue to celebrate the holiday season with the same joy and festive cheer as the singer herself.