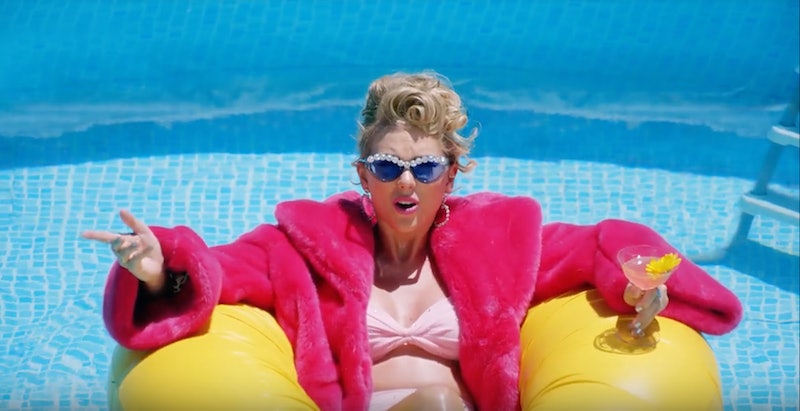 Taylor Swift’s “You Need To Calm Down” video is a powerful, hilarious, and unashamedly extravagant tribute to the LGBTQ community, meant to raise awareness for the Equality Act. But some people have been telling Swift to calm down herself. Since song's release, critics and commentators have been divided over its efficacy, but after seeing the song's impact, it's clear that Taylor Swift's activism in "You Need To Calm Down" is the kind of high-profile LGBTQ allyship we need right now.

The criticism of Swift is, in many ways, perfectly valid, with some pondering Swift's sudden focus on being an ally, especially given her previous silence on politics. Others are arguing that she's missed the point of being an LGBTQ ally completely, with Jordan Julian of The Daily Beast questioning whether the video is a case of cultural appropriation for profit, rather than activism.

Of course, there is an argument to be made that Swift is capitalizing off the LGBTQ community. Rebecca Jennings at Vox, for example, wrote that Swift "is speaking out in support of LGBTQ causes at a time that’s financially convenient." The singer released “You Need to Calm Down” and its celebratory video during Pride Month, and critics have speculated that she’s become such a big ally only because she can get paid for it and drum up some positive publicity for her new album Lover, due to be released on Aug. 23.

Inevitably, Swift will profit from the song, which hit number 2 on the Billboard Hot 100 upon its release. And it's true that businesses profiting off Pride without LGBTQ people financially benefitting from it is very harmful for the community — not only by not giving to LGBTQ causes, but also by commercializing, and therefore minimizing, the fight for LGBTQ rights. But as a member of the LGBTQ community myself, I don’t think that’s what Swift is intentionally doing. The singer isn't using the battle for LGBTQ equality to sell her music — she's using her music (and the huge marketing campaign that promotes it) to advocate for LGBTQ rights.

Like it or not, Swift has one of the largest and most powerful platforms an artist can have, if not the most powerful. Swift's last four albums sold over a million copies in the first week after their releases, she has over 200 million followers across Instagram and Twitter, and the influence she has on her fans is immense. In fact, the day after "You Need to Calm Down" was released, GLAAD reportedly received an "influx" of $13 donations (13 is the singer's lucky number, of course), according to NBC News. This is just one way the LGBTQ community is actively benefitting from Swift's power and platform.

Moreover, "You Need To Calm Down" didn't just inspire fans to donate to GLAAD, it inspired them to act. At the end of the "You Need to Calm Down" video, Swift promotes the Equality Act and encourages viewers to sign a petition calling for the Senate to pass the proposal, already passed by the House of Representatives. The Equality Act would protect LGBTQ people from discrimination in places of work, homes, schools, and other areas of public domain. It's a vital measure in the fight for LGBTQ rights, and Swift's Change.org petition asking the Senate to pass the law has the potential to be life-changing for an entire community. Senators Elizabeth Warren and Cory Booker have already responded to her petition, promising to push the Senate to pass the legislation.

A week after the music video's debut, Swift's petition has over 400,000 signatures. Clearly, Swift's reach and power makes her allyship extremely valuable, and in this political landscape, where Trump's administration keeps eliminating protections for the LGBTQ community, we could use the help.

Few artists with Swift's level of fame — save for gay icons like Madonna and Lady Gaga — have strongly advocated for an LGBTQ cause with the same strength and vigor that she's currently displaying. The fact the fact that she's using her new single, bound to be heard by millions no matter what it's about, to lift up the LGBTQ community and to call for support for the Equality Act will undoubtedly help educate the public about this important proposal, and reach people who might not seek it out.

Of course, Swift's allyship is not without faults, but it's not harmful. While "You Need to Calm Down" might be Swift's music video, she's not hogging the spotlight. The video highlights many current icons of the LGBTQ community, with cameos from Ellen DeGeneres, Laverne Cox, RuPaul, Billy Porter, Hayley Kiyoko, and the Queer Eye Fab Five. But perhaps most importantly, the video features some great drag queens from RuPaul’s Drag Race, including Trinity the Tuck, Adore Delano, Delta Work, Riley Knox, Tatianna, Trinity K. Bonet, A’keria C. Davenport, and Jade Jolie.

Drag is having a huge moment in pop culture right now with the rising popularity of shows like Pose and Drag Race, but the inclusion of these queens in Swift’s video is still important. Even though the short duration of the video doesn't allow for a more thorough examination of drag's history or impact, thanks to these appearances, the art of drag is being exposed to members of the singer’s fanbase that perhaps aren’t quite as familiar with it.

And most importantly, the queens weren’t used as mere props to increase Swift’s clout as an ally. According to journalist Evan Ross Katz, who spoke to one of the queens in the video, they were actually well-paid for their contributions, as they should be. It might sound obvious, but earning a fair wage can be a big issue for drag performers participating in major projects like music videos.

Additionally, Swift's support of these LGBTQ stars hasn’t stopped with the release of her video. She encouraged her millions of followers across Twitter and Instagram to "Stan/Follow/Support" these figures of the LGBTQ community. Again, it might seem like a small gesture, but any support of queer art and entertainment, especially from someone as influential as Swift, is welcome.

Moreover, members of the LGBTQ community didn't just appear in the video, they helped create it. Todrick Hall, a gay man of color and close friend of the singer, was an executive producer on the project. And this wasn't just an empty title. In a vlog, Hall revealed that he cast the drag queens and consulted with Swift on who should be included in the video. In other words, this wasn't an example of straight ally advocating for LGBTQ rights without actually taking the opinion of who she’s fighting for into consideration, and that’s an important distinction.

While Swift's advocacy for the LGBTQ community may be very in-your-face right now, to me, it doesn't feel opportunistic. It's simply a natural evolution of her more recent political activism, which started when she backed Tennessee Democrats during the midterm elections in October of 2018. And her LGBTQ allyship extends beyond one music video. The singer recently made a "very generous" donation to GLAAD, according to a spokesperson for the organization, as reported by NBC News. She also performed at a gay fan's engagement party in February 2019, and on June 14, she made a surprise appearance at New York's Stonewall Inn to commemorate its 50th anniversary. In fact, Swift has even celebrated LGBTQ people before in song form, albeit in a more subtle way, singing, "You can want who you want, boys and boys and girls and girls" on her 2014 track "Welcome to New York."

No member of the LGBTQ community is obligated to claim Swift as their own ally — every opinion is valid. But no matter what some may think about the tone or purpose of her activism, a powerful voice like Swift's is very welcome in the ongoing fight for LGBTQ rights, which is the most important focus right now. Let’s not "calm down" until the Equality Act is in effect.