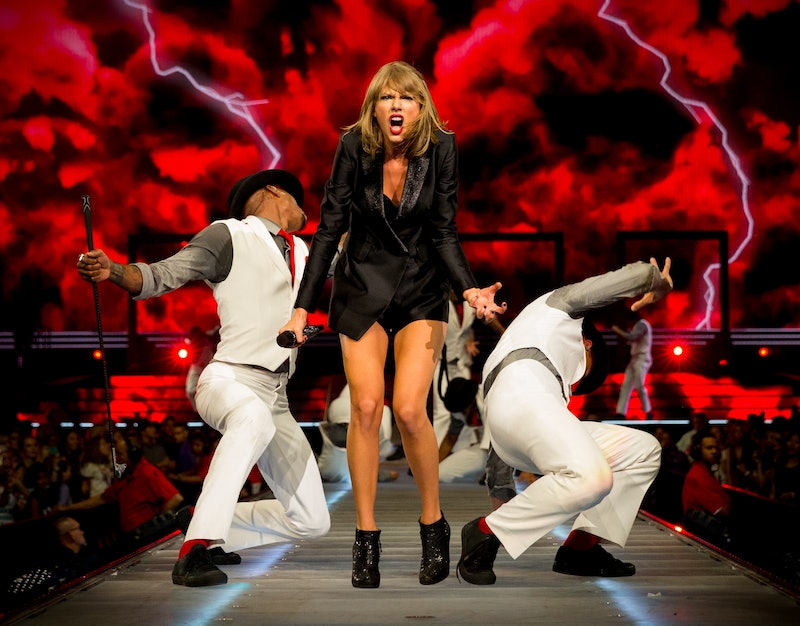 Millions of fans have grown up with Taylor Swift since she released her first eponymous album at 16 years old. But many people are beginning to see through her wholesome pop singer image, and her new single, "Look What You Made Me Do," is catalyzing that reaction. But for survivors of domestic violence, the song isn't just an anti-feminist pop jingle: "Look What You Made Me Do" utilizes a vocabulary of abuse that for many people is deeply, traumatically familiar.

I will admit that I have never been a Swift fan, however I do like to give all women the benefit of the doubt. When I first heard about the song I thought perhaps the song's catchphrase, "look what you made me do," was a diatribe against Swift's supposed victimization by the media, or other musicians, perhaps a clever tongue-in-cheek trope, because how could a woman write it any other way?

Instead, "Look What You Made Me Do" seems to have Swift taking on the language of an abuser to exact her own karmic revenge on old enemies. And the lyrics are pushing a button for survivors of domestic abuse. Author Justine Ireland took to Twitter to respond to Swift's lyrics: "'Look What You Made Me Do' is the exact phrase my dad uttered every time he would knock the shit out of me," Ireland tweeted. "Just not a good look."

Perhaps Swift was ignorant to the fact that the words "look what you made me do" could be a trigger for domestic violence survivors. Maybe she didn't realize that her lyrics blatantly reinforce victim blaming. But ignorance is in no way an excuse for using this language.

Nothing is done is a vacuum, and the failure of Swift and her team to educate themselves on violence against women, and to instead release a song that seems to reinforce victim blaming, is deeply troubling.

"I think the biggest factor that promotes victim-blaming is something called the 'just world hypothesis',” Sherry Hamby, a professor of psychology at the University of the South and founding editor of the APA’s Psychology of Violence journal told The Atlantic. “It’s this idea that people deserve what happens to them. There’s just a really strong need to believe that we all deserve our outcomes and consequences.”

"Look What You Made Me Do" seems to play into the just world hypothesis. The lyrics "All I think about is karma / And then the world moves on, but one thing's for sure / Maybe I got mine, but you'll all get yours," might be aimed at Kanye West as many have speculated. But, Swift's single minded tunnel vision for exacting revenge on perceived wrongs has made her blind to how her lyrics could be interpreted, despite how she may have intended them.

As Mikael Wood wrote in his review of the song in the Los Angeles Times, Swift's recent actions, coupled with this new revenge anthem, appear to be at odds. He speculated that generating a social media maelstrom could be Swift's ultimate goal, but at what cost? Her short-term media-grabbing play is distasteful and shortsighted, but worst of all it's damaging to women.

"If that’s her play, it’s a wild one, especially coming after her powerful testimony during the recent trial regarding her alleged sexual assault at the hands of a Denver radio DJ," Wood wrote. "In court, Swift appeared driven to speak with a voice loud enough for others. Now, just days later, she seems uninterested in that job."

The mixed message Swift's lyrics and actions send to her fan base, the majority of whom are young women, is anything but empowering. "Women between the ages of 19 and 29 are at greater risk [for domestic abuse]," according to Psych Central. "This age group reported more violence by intimate partners than any other age group."

Marie Hartwell-Walker, Ed.D. explains on PsychCentral that in an abusive relationship, the abusers always shift blame away from themselves, and adopts a "you made me do it" mentality. "The controlling [partner] always finds a way to make you feel that anything that goes wrong in your relationship is all about you," she explained. "If you have a complaint, [they] will quickly move the conversation to all the things you’ve done wrong since the beginning of time. Instead of discussing your concern, you find yourself on the defensive. Instead of working out a compromise, you feel you have to give in or the fight will go on forever."

What's more is that "Look What You Made Me Do" is damaging and misguided, because no one can make anyone else do anything. Everyone has free will, and the ability to control their own actions. Swift's lyrics are not something that should be coming from a 27-year-old woman who has a powerful influence on young women. Now matter how Swift intended her lyrics to land, the truth is that her word choice disempowers victims of domestic violence and reinforces trauma.

"Victim-blaming can be commonplace, in particular, by the abuser. Research further suggests that we blame victims who stay with their abusers," Michael Friedman Ph.D. explained on Psychology Today. "In a study of 194 participants randomly assigned to a series of hypothetical scenarios, results demonstrated that participants blamed victims who returned to their abusers more than victims about whom there was no such information."

Now, even though I am not a Swift fan, I don't by any means think her intention was to promote domestic violence. But, I do think this is a teachable moment for Swift to choose her words more carefully. Let's hope the lesson lands.

More like this
Playing In Wimbledon Whites While On Your Period “Isn’t Easy," Says Alicia Barnett
By Rachel Mantock
Taylor Swift Cries In Sneak Peek Footage Of David O. Russell's Secretive Film 'Amsterdam'
By Jake Viswanath and Radhika Menon
Sadie Sink Would Escape Vecna From 'Stranger Things' With This Taylor Swift Song
By Grace Wehniainen
Taylor Swift's “Carolina” Theme For 'Where The Crawdads Sing' Soundtrack Is Here
By Jake Viswanath
Get Even More From Bustle — Sign Up For The Newsletter