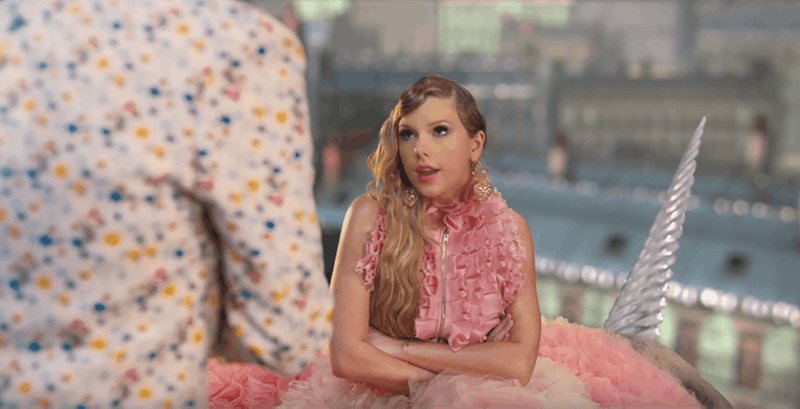 Whenever an artist drops new music, there is always plenty of dissection over every note and lyric. But when a new Taylor Swift song emerges, the level of analysis seems to double. Because as any Swiftie knows, the singer-songwriter loves to drop references and clues into each of her beautifully written songs, even in the lyrics to Taylor Swift's "ME!" It's almost as much fun unpacking who "All Too Well" or "Getaway Car" is about than it is listening to the music.

Yes, Swift is extremely good at constructing a story through song — especially one sprinkled with plenty of autobiographical hints. And "ME!" has been teased for months now. Her poppy-pink, sequined, butterfly-themed aesthetic has been taking shape since late February — along with some very important clues. The social media clues hinted that Swift's new atheistic would be much different than the reputation era's darker colors. And all of those hints and clues added up to "ME!" — Swift's brand-new single with Brendon Urie of Panic! At The Disco. You can watch the video and listen to the song below.

The opening lyrics of the track also signals some major "Blank Space" vibes as Swift references her reputation as a self-aware heartbreaker.

I promise that you'll never find another like me

I know that I'm a handful, baby, uh

I know I never think before I jump

And you're the kind of guy the ladies want

(And there's a lot of cool chicks out there)

I know that I went psycho on the phone

(And there's a lot of cool chicks out there)

Fans knew the chick portraits from Swift's Instagram had to factor in somewhere. Plus, her cats even make an appearance! But despite the romantic missteps mentioned in the lyrics, Swift sings, "Like a rainbow with all of the colors/Baby doll, when it comes to a lover/I promise that you'll never find another like..." Here's where the title of the track comes in...

I'm the only one of me

Baby, that's the fun of me

You're the only one of you

Baby, that's the fun of you

And I promise that nobody's gonna love you like me

It feels very exciting to get new Swift music for any reason, but it's especially satisfying to hear a song that emphasizes that no matter if you're single or in a relationship, loving yourself for who you are, just as you are, is one of the best things you can do for yourself. It's a TSwift-approved message, after all. The singer knows people can get preoccupied with her love life, and she is delivering, by talking about how she gives herself some TLC.

But Swift is also delivering on the references to her past lyrics. Lines like:

And then when we had that fight out in the rain

You went after me and called my name

Plus, there is a super fun, how shall we say, spelling portion of the lyrics that feels a little Gwen Stefani. Swift and Urie sing:

But you know there is a "me"

I promise that you'll never find another like me

But you know there is a "me"

And you can't spell "awesome" without "me"

Swift's lyrical game is almost always on point, whether she's comparing her love story to Romeo & Juliet or yearning for the days of December. In a July 2018 Harper's Bazaar interview with Pattie Boyd, Swift said the writing process often still comes so naturally to her. "But there are mystical, magical moments, inexplicable moments when an idea that is fully formed just pops into your head," Swift revealed. "And that's the purest part of my job. It can get complicated on every other level, but the songwriting is still the same uncomplicated process it was when I was 12 years old writing songs in my room."

With Swift's newest song, that pure process definitely shines through. Written with Joe Little, Swift looks like she's having the time of her life singing her new song — and the feeling is infectious. With a fun music video and a song full of good vibes, Swift is back in all-caps, with exclamation points.