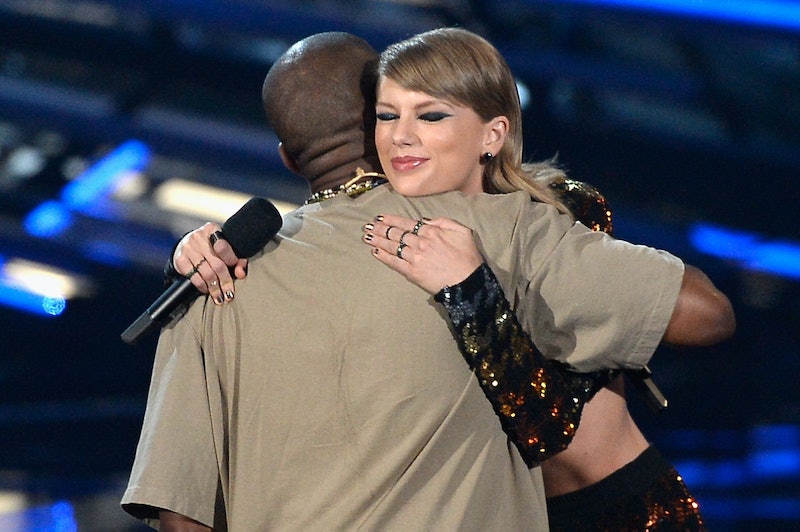 Are you hating Taylor Swift for the right reasons? Swift's history of racial insensitivity often gets swept up in the backlash against her perpetual victim narrative, her "Famous" feud with Kanye West and Kim Kardashian, and whether or not her new music is any good. Antis have a lot of reasons to draw on to fuel their Taylor Swift rage fire, but her past cultural appropriation never seems to make the top of the list — even though that's the huge, glaring issue with the singer as a person. The fact that she continues to make the same racial missteps is something that she hasn't addressed — ever. Worse, even when she apologizes, she never actually seems to change.

It all started back at the 2009 MTV Video Music Awards with the infamous "I'mma let you finish" moment. Swift was horrified, we were horrified, and Beyoncé was horrified. Though he would later apologize for his behavior, West clarified in a 2016 interview that what frustrated him about the moment was not Swift's win, but the systematic racism that led white artists to receive more praise and accolades for their artistry than black artists. "The only reason I drank the Hennessy in the first place is because I said, 'I'mma just have to get drunk to deal with all the lies I’m about to see,'" he said of the ceremony.

At the time, it seemed like one of those pop cultural instances that would go down in infamy, but the moment would become a turning point in Swift's career. Because, in retrospect, it led to one of the three main reasons why racial sensitivity and Taylor Swift aren't exactly synonymous.

You see, that was not the last we heard of the feud between Swift and West. The singer mentioned it during her Saturday Night Live monologue later that year and wrote "Innocent" about West in 2010 (featuring the lyrics "left yourself in your warpath, lost your balance on a tightrope, lost your mind tryin' to get it back"). Slant Magazine's Jonathan Keefe criticized the song in 2010 as a "patronizing, condescending sermon" that seemed particularly hypocritical of Swift since it appeared on an album that wasn't exactly the pinnacle of morality ("Better Than Revenge" condemns a boyfriend "thief" while "Speak Now" contrastingly begs an engaged man to leave his almost-wife at the altar). Slate writer Jody Rosen pointed out in 2011 that Swift was creating a patronizing narrative in which a white woman musically "offer[ed] 'absolution' to a 32-year-old black man." Even NPR writer Linda Holmes wrote in 2010 that the song lyrics "who you are is not what you did" and "you're still an innocent" as applied to West for interrupting her on stage — rather than to a "reformed criminal" — was kind of "creepy."

At first, Swift seemed to internalize some of these red flags, even if she didn't respond to them. After all, by 2015, she and West had buried the hatchet, and Swift even presented him with the Video Vanguard Award at the 2015 VMAs. That should have been the end of it, but then the "Famous" feud began and went down in infamy.

"Kanye did not call for approval," the original statement from Swift's rep read. "She... cautioned him about releasing a song with such a strong misogynistic message." Whereas everything to this point was arguably not her fault, Swift, in defiance of all precious criticism, deliberately pointed fingers at West as the aggressor in their renewed feud. That's why, after Kim Kardashian posted the partial Snapchat video that revealed that Swift had been called and had approved of at least part of the lyrics to "Famous," people began to realize that for years Swift had been, unintentionally, playing off of an incredibly harmful racial stereotype: that of fragile white femininity being threatened by a scary black man.

America's fear of black men as aggressors and brutes is such that, as Cosmopolitan writer Kendra James points out, black men are "jailed, beaten, and killed" to this day due to the "simple words of white women." Now, it's true that, by discussing West's actions against her in her songs, interviews, and issued statements, Swift is hardly doing anything as serious as police brutality or the imprisonment of black men for crimes that white men get off easier for. However, the narrative she perpetuated plays into the systematic racism that leads to these more serious consequences for black men on the street. And for someone who curates her image as carefully as Swift does, it was dangerously ignorant of her in 2016 to miss the racial implications of playing the blameless victim here on purpose.

However, that's not the only racial issue that she's been dangerously ignorant about.

2. The Cultural Appropriation And Whitewashing Controversies

When Swift kicked off her 1989 era with her 2014 music video for "Shake It Off," the scene of her twerking along with her multi-ethnic dancers led to intense backlash from viewers. Just as when Miley Cyrus twerked at the 2013 VMAs and became the white face of a dance that the black community had been doing for years, many people were not amused to see another blonde-haired, blue-eyed white girl once again sexualizing and appropriating black culture, even for a music video cycling through many different kinds of dances. "Shake It Off" director Mark Romanek denied that the video was perpetuating racist stereotypes, telling Vulture that it had a "larger, humanistic, and utterly color-blind message" and that it was "innocently and positively intentioned. And — let's remember — it's a satirical piece." Swift, as you might expect, did not comment.

Another of her 1989 music videos, 2015's "Wildest Dreams," also faced criticism for its racial insensitivity. Set in 1950s Africa, fans criticized the video for not only whitewashing Africa, but also seeming to give an idealistic view of colonialism. Director Joseph Kahn issued a statement that it would have been "historically inaccurate to load the crew with more black actors" but that there were "people of color in the video" and the "key creatives" behind the video were people of color, as well — including himself. Again, Swift did not comment, but Kahn did note that the singer would be donating the proceeds from the video to the African Parks Foundation.

But, just in case you thought the past might be in the past, Swift's "Look What You Made Me Do" music video drew criticism for a preview shot that looked like a recreation of Beyoncé's "Formation" era — right down to the pose. Considering the fact that "Formation" was a celebration of black women and black culture on a visual album that was more of the same, fans were once again not amused with Swift seeming to trivialize and appropriate the black woman's struggle. The director — Khan — denied the similarities, saying on Twitter, "I’ve worked with Beyoncé a few times. She’s an amazing person. The #LWYMMDvideo is not in her art space." (Again, Swift didn't comment.) The final video was not the shot-by-shot remake of "Formation" that fans had feared, but, given the above controversies and some of the apparently accidental references to Beyoncé, the BeyHive can't be blamed for worrying.

The worry is even more justified given Swift's silence every time in the face of the backlash. They're her music videos with her name on them and her starring in them — so why are the directors the ones refuting the racial insensitivity and not her? Swift said in a 2015 GQ that interview that she is the one in control of her career and that she thinks about things carefully before she does them, saying, "It's less about reputation management and strategy and vanity than it is about trying to desperately preserve self-awareness." But letting men talk for her about the backlash that she is facing and the missteps that she has made in her self-professed tightly-controlled career shows a startling lack of self-awareness. And it makes her silence, when it matters, as deafening as if she had shouted.

And that brings us to the most infamous way in which Swift has been accused of being racially insensitive: her white feminism. After declaring herself to be a feminist in 2015, Swift's brand of the movement took the form of "women supporting women" and a gang of predominantly white, predominantly thin girlfriends that soon became synonymous with the word squad and #squadgoals. (Oh, and by the way, "squad" is a black slang term that, once again, caught fire in the public sphere thanks to a white woman.) However, it seemed that Swift's feminism meant supporting only a certain kind of woman — a white woman, and usually a rich white woman, aka herself.

The most famous example came when the nominees for the 2015 MTV Video Music Awards were announced, and Nicki Minaj tweeted about her frustration that "Anaconda" had not been nominated for Video of the Year. Minaj pointed out that it was common for videos featuring black women and women of different body sizes to be excluded from award ceremonies' lists. Swift interpreted this as a slight against her and her Video of the Year nomination, and jumped into this discussion to chastise Minaj for "pitting women against each other." When Minaj denied this and asked Swift to speak on this racial issue, Swift bizarrely said nothing more than, "If I win, please come up with me! You're invited to any stage I'm ever on." Suddenly, Minaj's original point about race and prejudice was buried by another one of Swift's headline-making feuds.

Now, to be fair, Swift can't control which parts of the conversation become the lead story. And, two days later, she apologized to Minaj, tweeting, "I thought I was being called out. I missed the point, I misunderstood, then misspoke. I'm sorry, Nicki." Finally, as promised, Minaj did go on stage with her at the VMAs. But in inserting herself into a conversation to speak out in defense of herself, but not in defense of black artists like Minaj even when directly asked to and even after apologizing two days later, Swift became the poster child for white feminism.

But there's a difference between being racially insensitive and being racist. Swift, like Miley Cyrus and Katy Perry before her, is the former. And the criticisms are justified considering that Swift professes to think about everything before she does or doesn't do it to the point where she's been called "calculating" (a word she told GQ that she hates).

More like this
Everything To Know About Taylor Swift’s 10th Studio Album, 'Midnights'
By Grace Wehniainen and Jake Viswanath
Taylor Swift Wants To Direct A Movie Next — But You Might Have To Wait
By Radhika Menon
Britney Spears Shares Unknown Details Of Conservatorship In New Voice Notes
By El Hunt
Twitter Is Freaking Out Over Rihanna’s 2023 Super Bowl Halftime Show Announcement
By Stephanie Topacio Long
Get Even More From Bustle — Sign Up For The Newsletter