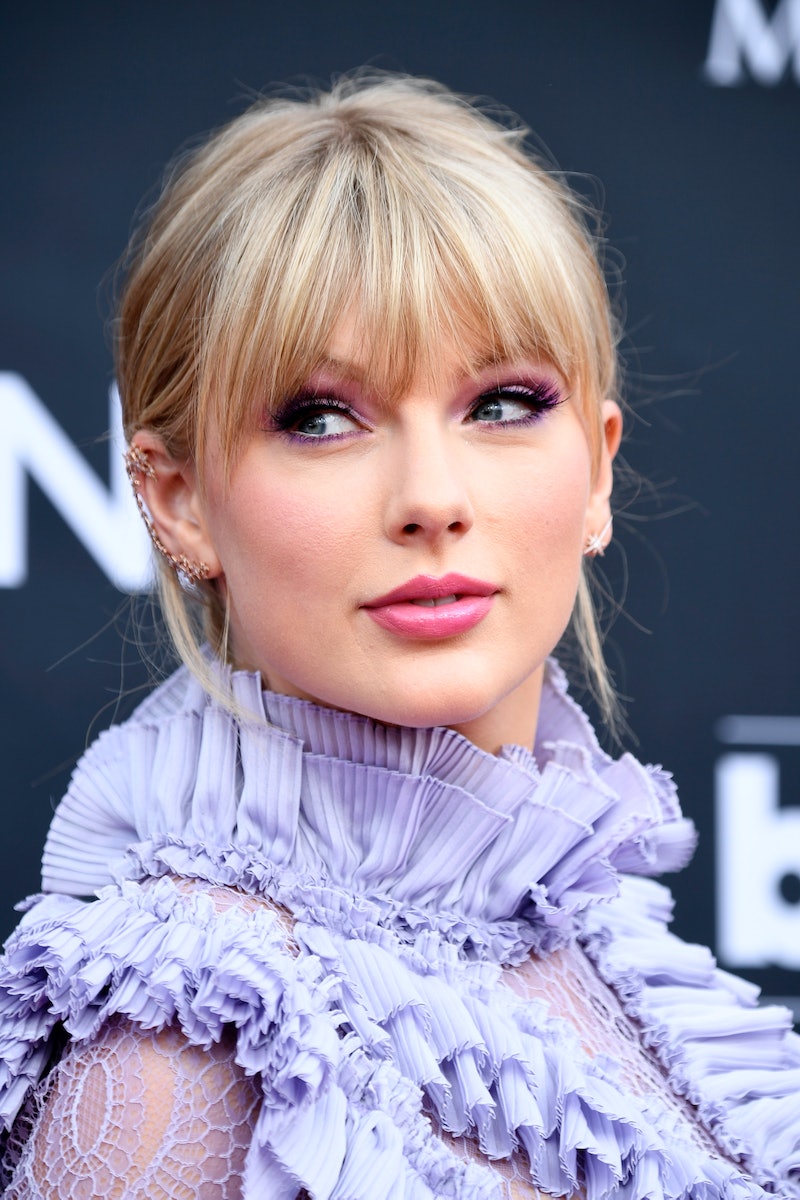 Taylor Swift had a busy summer. Not only has she launched a new album called Lover and completely reinvented her Reputation-era persona, but Taylor Swift landed the September Vogue issue cover. The September issue is basically the fashion industry's Bible, and marks the tone of the upcoming fall and winter season. It's always the heaviest issue of the year, and it takes months to produce. To be selected as the cover star is a big honor, and Swift nabbed the spot this year.

For the cover, Swift is wearing a blue Louis Vuitton jumpsuit with white piping. The artist accessorized the simple look with Cartier and Bvlgari rings. Rather than facing the camera in a typical pose, Swift is bent over and pointing directly at the reader. It has a vague Uncle Sam "I Want You for the U.S. Army" kind of feeling to it.

Swift's trademark blonde hair is arranged into a '70s-era shag, with her layers blown out in a way that faintly heralds back to Farrah Fawcett's style. The stylist behind the hair is the iconic Christiaan Houtenbos, who has over four decades of experience and styled nearly 20 Vogue covers. Houtenbos is also behind some of pop culture's most iconic beauty looks, like Grace Jones’s flat top and Blondie's Debbie Harry's choppy shag.

As for Swift's makeup, her look was created by the New York based makeup artist, Fulvia Farolfi. And before you ask, the lipstick that Swift had on the cover was Chanel's Rouge Coco Baume in the shade "Boy," according to Farolfi's Instagram.

In the issue, Vogue helpfully offered up drugstore alternatives to recreate Swift's look. Specifically, Vogue suggested using Maybelline New York alternatives. For lips, the publication recommended Shine Compulsion by Color Sensational Lipstick in the color "Undressed Pink", which is $7.99. For cheeks, the Fit Me Blush in the hue "Pink" was suggested, and clocks in at $5.99. As for the smokey eye, Vogue suggested Tattoostudio Sharpenable Gel Pencil Longwear Eyeliner Makeup in the color "Deep Onyx".

In the issue, Swift talks about sexism, cancel culture, and standing up for herself. In the cover interview, Swift shares that Lover might be her favorite album yet. "There are so many ways in which this album feels like a new beginning. This album is really a love letter to love, in all of its maddening, passionate, exciting, enchanting, horrific, tragic, wonderful glory," Swift tells Vogue.

For the occasion, Swift also took over the "Go Ask Anna" series to ask Anna Wintour a series of questions. Two major things got cleared up: which trend Wintour hated the most, and how did Wintour feel about Swift copying her iconic hairstyle.

For the 2016 Grammy Awards, Swift famously arranged her hair in a way that mimicked Wintour's bob. "I'm being very very honest, and Taylor I have to tell you, I was honored," Wintour responded.

As for which trend Wintour wished never existed, the Vogue editor said that she saw a surprising fad while in Paris for Couture Fashion Week. "I definitely saw far too many neon leopard print leggings. Something that I definitely would not want to see again," Wintour responded.

Keep an eye out for the September issue of Vogue, and get all of your fall inspiration in one read.

More like this
Dua Lipa On YSL Beauty, Plus Her Fearless Approach To Hair & Makeup
By Erin Stovall
Jenna Ortega's Hair Routine Occasionally Involves Washing Out Fake Blood
By Olivia Rose Ferreiro
A Definitive Guide To All 52 'Real Housewives' Beauty Brands
By Audrey Noble
Jennifer Lopez's Holiday Pedicure Has The Most Glam Snowflake Design
By Olivia Rose Ferreiro
Get Even More From Bustle — Sign Up For The Newsletter