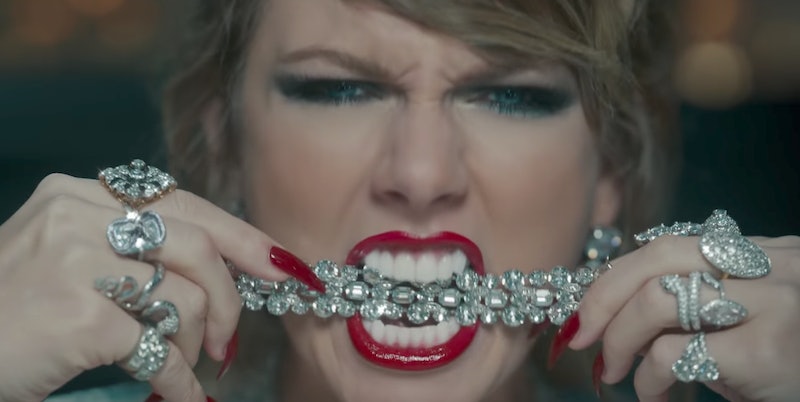 Taylor Swift shows off many different fashion and beauty looks in her blockbuster "Look What You Made Me Do" video — from an '80s level perm to a dominatrix-like outfit to a look that has her dripping with diamonds in a tub. Swift is also wearing lots of snake jewelry in the video, with both gold and silver adjustable snake rings available for $60 a piece through her webstore. She rocks a snake necklace and her strappy gold heels, worn while she is perched on her throne, drinking tea poured by a serpent.

But as one Twitter user pointed out, the snake jewelry motif is hardly new for Swift, and it's an important thing to consider.

That's because the Internet, conspiracy theorists, Swifties, stans, and Kardashian nation have been assuming that Swift's snake theme is her not-so-subtle way of throwing shade at Kim Kardashian and Kanye West for leaking an audio recording of Swift, during which she appears to give West her blessing to reference her in his scathing song "Famous."

In actuality, Swift has been wearing snake jewelry for years.

Case in point: her "Shake It Off" video. In one of the dance sequences, the singer — wearing a cropped leopard print jacket and denim short shorts — is rocking layers of gold chains, including a massive snake charm.

See? Ophidian accessories have been a part of Swift's fashion repertoire for a while now.

There's just a lot more of them in "Look What You Made Me Do." There's a slithery, silvery ring.

Swift also wears a gold version and it fits on any finger, including the thumb.

Notice the serpent necklace and bracelet. Swift is really, well, piling it on.

The strappy heels are coiled around her ankles and feet. That's not an accident, people.

But this snake necklace, worn in 2014, certainly throws a wrench into some of the theories that everything about "Look What You Made Me Do" is completely calculated.

Maybe this Kimye Konspiracy is a bit overthought, huh? OK, you're right, it probably isn't.

But maybe Taylor Swift really and truly adores snake jewelry? Perhaps she even has a secret pet snake named Elliot Stabler in homage to the crime procedural whose characters have inspired names for her cats.

Yeah, that's unlikely, since nothing is left to chance with her image and her visuals. But the fashion and the plot thicken...

Meanwhile, if you dig snake accessories and the drama, you can get your own. There's also a black hoodie with a snake graphic going for $75.