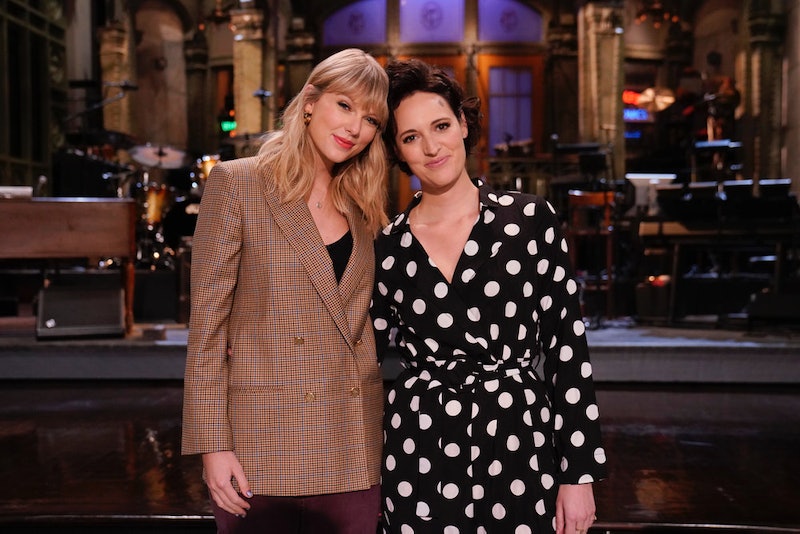 Saturday Night Live has hosted its fair share of A-list celebs over the years, but this week's host and musical guest lineup was especially star-studded. Not only did Fleabag star Phoebe Waller-Bridge kick off the show with a wry, hilarious monologue, but Taylor's Swift's SNL performance allowed the singer to show off a more subdued side of herself — kind of the opposite of what you'd expect for a big performance, but a choice that felt fresh. Rather than resorting to her usual flashy theatrics, Swift started off by playing a slow, gentle ballad version of her song "Lover," sitting at a piano while awash in green. It was simple. There were no surprise cameos, no political statements — just Swift and the music.

Of course, this was far from Swift's first Saturday Night Live performance. She's been the musical guest for the sketch comedy series on multiple occasions in the past, and even pulled double duty back in November 2009, serving as both the host and musical guest at the same time. But this night was particularly special for Swift, because she's a self-professed fan of Waller-Bridge.

"Ever since I saw Fleabag, I've been all 'I can't wait to see this woman host @nbcsnl' and it's happening now + I get to be there too = I am in shambles," Swift tweeted shortly after the news broke that they would be appearing on SNL together.

Prior to that, Swift spoke with Entertainment Weekly about Waller-Bridge's talents as an actor and writer. "I'm really, really obsessed with Phoebe Waller-Bridge and her writing. I love Fleabag," she told the outlet in May. "I just am so impressed by her body of work, her humor. What I love about is she makes you crack up laughing, shocks you, and breaks your heart all in the span of a few minutes in that show."

Given the level of fame Swift herself has reached throughout the years, it's hard to envision her getting starstruck by anyone, but if it's going to happen, Waller-Bridge is an apt choice; who wouldn't want to meet a woman who not only blessed us with Hot Priest, but created a photo as iconic as this?

Still, Swift managed not to fangirl enough to pull off two stellar performances. For her second song, she sang "False God," also from her August album Lover. She once again opted for something moodier and downtempo, wearing all black amid a stage full of floating lightbulbs. She was accompanied by backup singers and Lenny Pickett, SNL's musical director, on saxophone, lending a jazz feel to the rendition.

Overall, Swift's SNL performance was a marked departure from the big, bright, celebrity-filled show she put on at the Billboard Music Awards only a few months ago, but ultimately, it showed off the emotional range of Lover.

"This album, in tone, it's very romantic," Swift said of the record on Instagram in June. "Not just simply thematically, like it's all love songs or something. The idea of something being romantic…it doesn't have to be a happy song. You can find romance in loneliness or sadness or going through things in your life… it just looks at those things through a romantic gaze."

Her SNL performance reflected that.