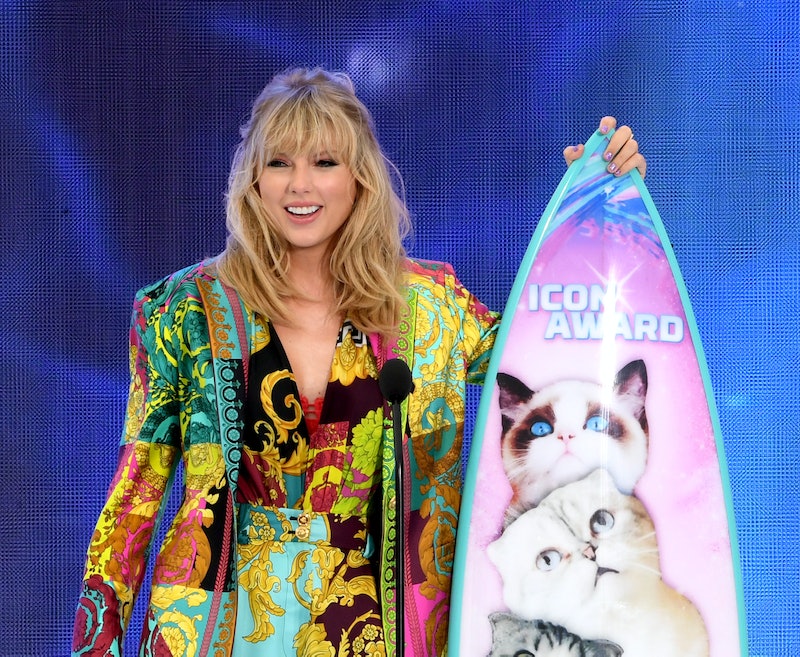 A lucky 13 years after releasing her first album, Taylor Swift is being celebrated at the 2019 Teen Choice Awards — and that includes one of the show's traditional surfboards, covered with drawings of Swift's cats. During Sunday night's awards, Swift received the Teen Choice Icon Award, and her speech included advice aimed at all the teenagers out there, but really, it could apply to people of all ages, too.

Swift covered a lot of ground in her speech, including an announcement that the title track from her new album, Lover, will be releasing on Friday, one week before the full album drops. But mostly, she used that time to address anyone who's struggling with mistakes they've made, reminding fans that no one gets through life "unscathed."

"I think one thing I wish I would've known as a teen is that mistakes are inevitable. Sometimes you think if you try hard enough to make every decision perfectly, you think you can possibly, like, ace life, and never make any mistakes. But it's normal to make mistakes, and I just want you to know that if you're out there, and you're being really hard on yourself right now for something that's happened, or messing up, or feeling embarrassed, it's normal. That's what's going to happen to you in life. No one gets through unscathed. We're all gonna have a few scratches on us."

She also added, "We're living in a crazy world and we live in an insane time. Please be kind to yourselves and stand up for yourself, please."

Swift also took the opportunity to talk about the United States Women's National Soccer Team and Alex Morgan, who presented her with the award. The USWNT has been fighting for equal pay since before they won the World Cup, and Swift referenced that fight in her speech.

"Not only winning the World Cup with her amazing teammates, but while they were winning the World Cup, they were also taking an historic stand in terms of gender equality, gender pay gap," she said. "Please, please, please, support her and her teammates, because this isn't over yet, it's not resolved. Get online, talk about it, let people know how you feel about it, because what happened to them is unfair. It's happening everywhere, and they are heroes and icons for standing up."

Swift also shared a photo of her with Morgan at the awards on Instagram, referencing the fact that they have an important number in common. Swift's lucky number is 13, which also happens to be Morgan's jersey number.

"The thirteens really jumped out," the singer wrote. Morgan also shared another photo of them together on her Instagram Story.

Anyone who's survived their teenage years and lived to tell the tale knows that it's a difficult time, but it always gets better. Swift's advice is on point — not only is making mistakes okay, but it's also inevitable. Learning from those mistakes is what matters. And in the meantime? Well, that's what Swift's music is for.