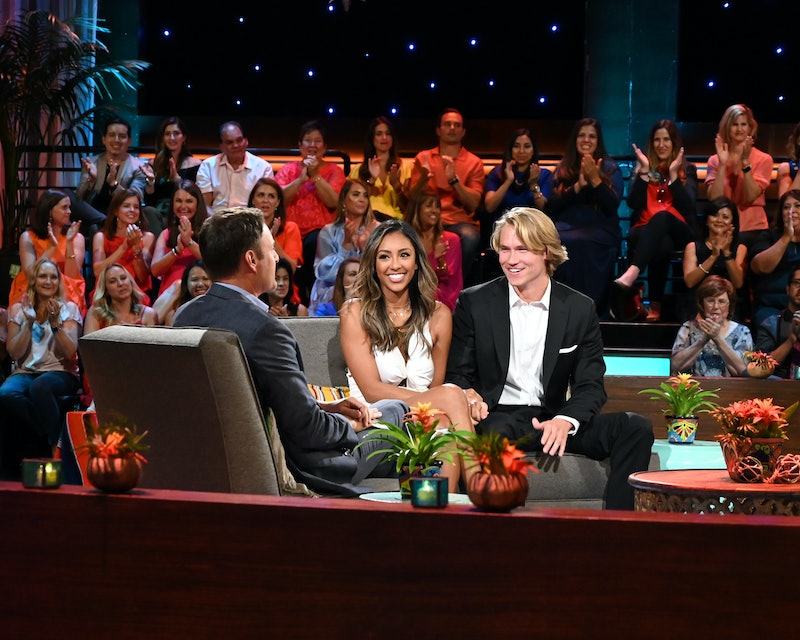 Between all the breakups and the engagements, so much happened on the Bachelor in Paradise finale. One thing viewers got to see on the after special on Tuesday, Sept. 17 was Tayshia Adams and John Paul Jones' reunion after previously calling it quits on the beach. And despite what any particular spoiler accounts may say, Tayshia and JPJ are still together and they're taking to Instagram to prove it.

This particular post-Paradise drama started when Bachelor Nation's spoiler extraordinaire Reality Steve claimed via Twitter that the fan-favorite couple was no longer together. While the finale was still airing, Reality Steve (whose real name is Steve Carbone) wrote that Tayshia and JPJ broke up after filming the reunion special on Aug. 27. Later, Steve went on to add, "I see what Tayshia and JPJ are posting. I’m just telling you what I’m hearing."

However, "TayPJ" seemingly the record straight shortly after the reunion aired. Over on Instagram, Tayshia posted a photo with JPJ, writing, "TAYPJ for the win! 😋" in her caption. When some started to question whether the couple was actually broken up, citing Reality Steve's recent claim, the former Bachelor star gave a pretty clear response. Tayshia wrote, "guess what...he's wrong!!!!" along with a wink face.

If you're a fan of everything Bachelor-related, there's a good chance you're well aware of who Reality Steve is. But, in case you've taken a spoiler-free stance on the franchise, you should know that Carbone, as "Reality Steve," has been heralded as something of a godfather for Bachelor Nation spoilers. He has correctly predicted how numerous Bachelor and Bachelorette seasons have ended, as well as stating the next Bachelor would be Pilot Pete before it was publicly announced.

In a recent interview with InStyle, Reality Steve explained that fans have flocked to his site and various social media accounts in recent years to try and get a behind-the-scenes look into the ABC franchise. However, he also mentioned that there's one downside to being a blogger who specializes in spoilers — not all of the "tips" he receives are completely accurate. “Sometimes I'll get something told to me and I'll know immediately that it’s 100% true. Sometimes it takes a little more digging," he told InStyle.

Given this detail, it stands to reason that whatever "tip" he received about Tayshia and JPJ's relationship may have been off-base, especially because the former Bachelor star offered up some clarification. But even so, Reality Steve still stands by his original claim about the couple. In response to a fan on Wednesday, Sept. 18, he said that he believes the two are "lying": "I'll believe what I believe, and that is that they're lying, and you believe what they say. That's fine. No need to respond anymore."

Even though it doesn't seem like the issue has fully been put to rest (based on Reality Steve's latest tweet), Tayshia and JPJ are focused on the positive at the moment instead. Following their whirlwind time on Paradise (which involved their late start at love, some Derek Peth drama, a breakup, and a makeup), TayPJ remains a force to be reckoned with. And that's despite what anyone has to say about their relationship status.

More like this
Hannah Ann Got Engaged 3 Years After 'The Bachelor' & The Proposal Was Dreamy
By Grace Wehniainen
Zach Reveals The Chaotic 30 Minutes That Were Cut From ‘The Bachelor’ Premiere
By Grace Wehniainen
David Schwimmer & Gemma Collins Join 'Celeb Bake Off' & Twitter Can't Cope
By Sam Ramsden
Twitter Has Renamed Ekin-Su After *That* 'Dancing On Ice' Performance
By Sophie McEvoy
Get Even More From Bustle — Sign Up For The Newsletter
From hair trends to relationship advice, our daily newsletter has everything you need to sound like a person who’s on TikTok, even if you aren’t.