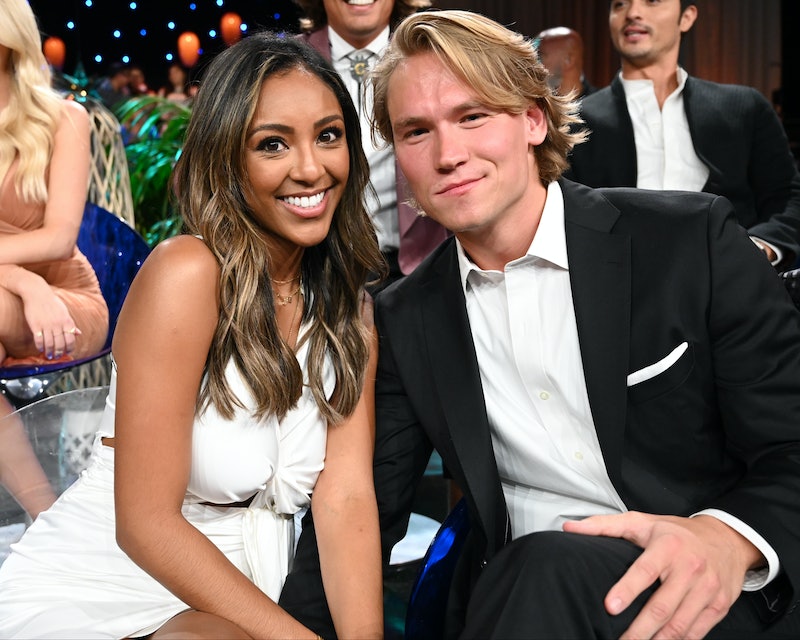 Regardless of what the rumor mill is saying, this Bachelor in Paradise couple is still going strong. On Monday, Sept. 30, Tayshia Adams and John Paul Jones reunited, sharing videos from their adventures on Instagram Story. So just in case any Bachelor Nation fans were worried that these two already called it quits, they keep dropping more evidence that they're very much together post-Paradise.

Although JPJ and Tayshia broke up at the end of BiP, they surprised fans by revealing they'd actually gotten back together on the season finale. Since then, it doesn't look like they've managed to spend a ton of time together IRL, which makes sense, being that Tayshia lives in California while John Paul Jones hails from Maryland. Despite the distance, they seemed to have a good thing going, but recent rumors cast a cloud over their relationship status — although Tayshia denied they broke up in an Instagram comment, and so did John Paul Jones in an interview with Bustle last month, saying they were taking things "one day at a time."

As they've made clear a few times now, fans have no reason to be concerned, especially since John Paul Jones and Tayshia were hanging in Los Angeles just this week. On Tayshia's Instagram Story, she shared a video of herself sipping on a cocktail outside before panning to John Paul Jones to show that he was there, too.

JPJ also took to Instagram to share the proof that they were hanging out, including a photo and multiple videos. In one video, John Paul Jones shared that he had a "special guest" in his car — Tayshia, obviously — and then also shared their drink spot like she did.

In a later video, JPJ shared that they were out with some of their BiP costars, including Kristian, Sydney, Kristina, Tracy, and even Mike Johnson, all having drinks. Meanwhile, other BiP faves, including Demi Burnett, were cheering on Hannah Brown at Dancing with the Stars.

It says a lot that Mike was out with them, since he was rumored to have been getting flirty with Tayshia at the iHeartMusic festival in September. However, Mike was quick to dispel the rumors while talking to Us Weekly, telling the outlet that they weren't there alone — although JPJ wasn't present, BiP stars Derek, Dean, and Caelynn were. Mike said:

Tayshia and I FaceTimed JPJ when we were in the car going to some event. She is happy and is beautiful in her relationship with JPJ. Those guys would never let me try to mack on all of our friends’ girlfriend. And vice versa. Thank you for asking that question. That’s just BS, like no. She’s an attractive woman, but not for me. She’s in a relationship and I may or may not be talking to someone as well.

Plus, as fans are well aware, Mike has been seeing Demi Lovato. Earlier this week, he even revealed that they've been out on multiple dates and she "kisses really well," so there was never really any chance he and Tayshia were a thing.

But adding even more fuel to the TayPJ breakup speculation, on Sept. 18, Reality Steve tweeted that Tayshia and John Paul Jones had broken up since filming the finale. Despite the couple's own posts and comments, Steve has stood by his story.

Still, no matter what speculation is out there, JPJ and Tayshia are still together — and they haven't given any clues to the contrary. So once in a while, real love can come out of Bachelor in Paradise after all.