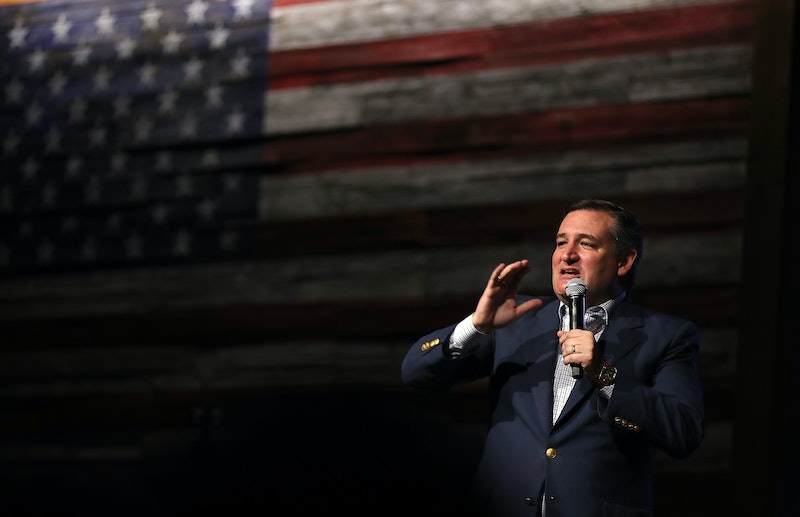 The junior senator from Texas is aware of every quip you've made about him. On Saturday, Republican Sen. Ted Cruz joked about Rep. Beto O'Rourke's near win in his bid for Cruz's seat in November. "As a Republican, I believe everything happens for a reason. The 2016 race was meant to teach me humility," Cruz said at a semi-annual dinner for the Gridiron Club, a group of journalists to promote camaraderie and furnish scholarships, according to The Dallas Morning News. "Beto's candidacy was meant to teach me humility when the first time didn’t take."

Cruz only beat O'Rourke by 219,427 votes, according to The New York Times. Despite the win, Cruz seemed to be a little salty that national media is still talking about the man he defeated. O'Rourke's name has been mentioned by just about every news outlet as 2020 Democratic presidential contender. (O'Rourke hasn't decided if he's running.) "I know that all of you in the media were betting big on Beto. And what gets me is that you still are," Cruz said, according to The Dallas Morning News.

After his near-defeat, Cruz said found a pattern: Anyone but Ted. "I'm starting to see a disturbing pattern. I took on Trump. He became president. I beat O’Rourke, and somehow that’s launched Beto 2020," Cruz said, according to the newspaper. "It's like there’s some unspoken rule that anybody is presidential timber once they have proven they're not Ted Cruz."

The Dallas Morning News reported that this is the second time Cruz has performed in front of the Gridiron Club. The first in 2014 was just months after 2013 government shutdown that he took a leading role in. While the appearance apparently helped to rehabilitate the Tea Party senator's image, it didn't stick, he said. Cruz made himself "slightly less odious to you than usual," he said, according to the newspaper. "The only problem is impressions are fleeting and I'm afraid we might need to make this an annual event."

But Cruz didn't only talk about himself. He also tried to spin how much he's deferred to President Donald Trump, who spent a significant portion of the 2016 presidential campaign making fun of Cruz and baselessly accusing his father, Rafael, of assassinating President John F. Kennedy. (There was a photo of Rafael and Lee Harvey Oswald on Trump's favorite tabloid.) "Sometimes you just have to put minor squabbles behind you. You know, like whether or not your dad was the guy on the grassy knoll," Cruz said, according to the News.

Some stories are just too good to hold though, Cruz said. "To my friends at the Enquirer, I'm just saying, this story is too good to just catch and kill," he said, referencing a practice of buying the rights to stories (usually negative) and then not printing or publishing said stories.

And he's apparently using that newfound good will to tell Trump to nominate O'Rourke as an ambassador to Ireland, Cruz joked. "What really sold Trump was when I told him that he speaks fluent Irish," he said.

Cruz knows that he's not exactly popular, despite the jokes. He said the dinner's meal gave him "a break from a demanding regimen that I've following lately called the Cruz diet: I dine out. I take a few bites, and then I get a little cardio getting chased by an angry mob," he said.