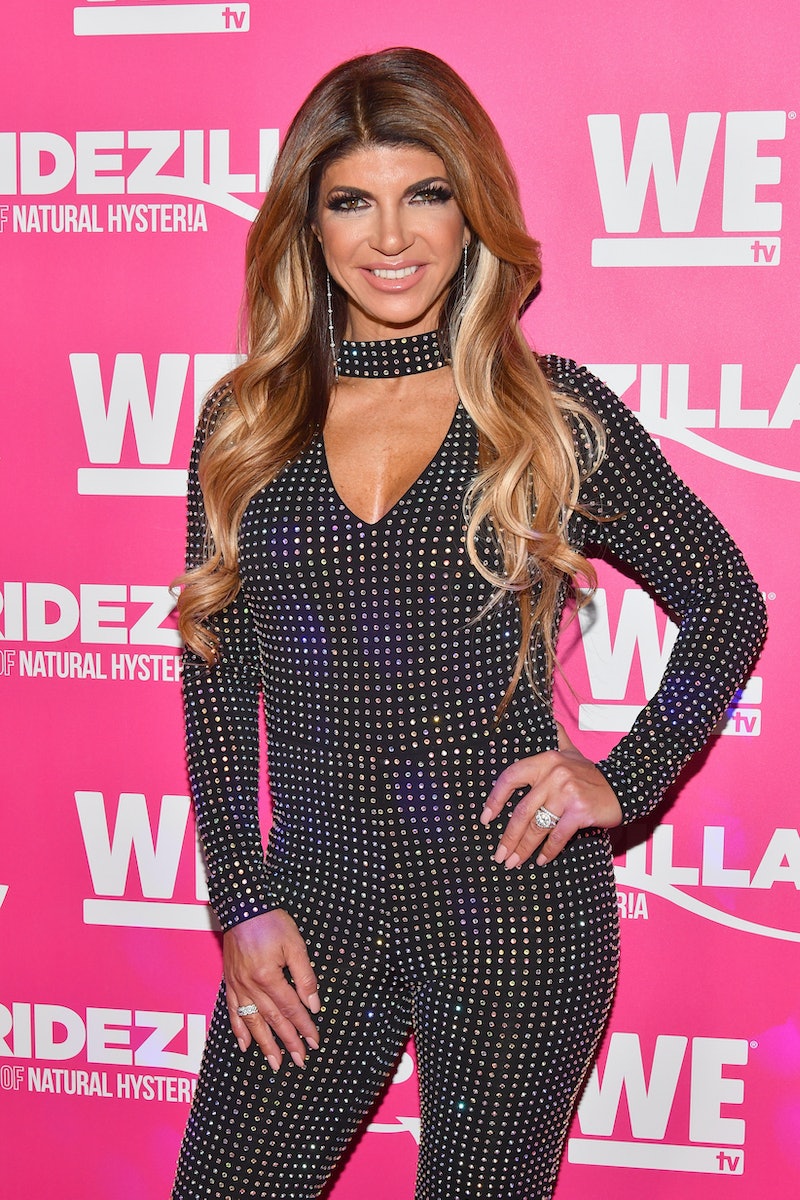 There's no denying that the judge's order that Joe Giudice will be deported to Italy after his prison stint is profoundly sad for his four children. Now, Gia, Milania, and Teresa Giudice have spoken out since Joe's deportation via Instagram posts. As expected, this has been a lot for them to deal with. Joe is set to get out of jail in March 2019 and immediately be deported, according to a People article that was published on Oct. 10.

According to People, Joe has 30 days since the judge's ruling to appeal the decision, something his family wants him to do. (Bustle reached out to Teresa's rep for comment, as well as Bravo, but did not receive an immediate response.)

As of this moment, the Real Housewives of New Jersey star has not released an actual statement about the impending deportation, but Teresa did post a photo of the Statue of Liberty with hands over its face along with some praying hands emojis in the caption on Oct. 14, seemingly referencing the news.

Teresa has been doing her best to carry on with life as she normally would. On Friday, Oct. 12, Teresa shared Instagram Stories watching her oldest daughter Gia cheer at a her high school's football game.

A few days later, Teresa shared a photo of herself and Gia visiting Rutgers University in New Jersey. The Real Housewife did not explicitly address her husband's deportation but she did write, "Taking it one day at a time," which is very much applicable to the situation.

Teresa and Joe's 12-year-old daughter Milania shared photos of herself and her father on Oct. 14, along with a heartfelt plea hoping to fight his Joe's deportation. Milania wrote,

"My dad , who is the best dad in the world, needs to come home. We aren’t done fighting dad. I can’t believe this is happening. I can’t imagine another day without you. We are gonna do everything we can to fight this daddy!! I love you with all my heart buddy. #heartbroken."

RHONJ viewers have come to know and love Milania as the standout comedian in her family throughout the years. So to see her hashtag the word "heartbroken" truly is heartbreaking.

Gia shared an old photo of herself and her father with a very long caption. She wrote, "my father is no threat to society he is one of the most warm hearted people I know, he would never harm a soul." The oldest Giudice daughter also said,

"My father did his time and learned from his mistakes. Isn’t being in there supposed to make you realize your mistakes so you can become a better person?"

Clearly the Giudice family was not expecting the deportation news since Gia revealed, "We have so many plans to do as a family when he gets out. I need my father to be here."

Gia concluded, "My father belongs with us and his entire family. My father came into this country when he was one years old, the United States is the only country he knows, spread the word #bringjoehome."

There's no doubt that Joe has been a polarizing person among the Real Housewives of New Jersey fandom throughout the show's eight seasons so far, but there's also no denying that his family his greatly affected by the impending deportation. Fans have watched the Giudice girls grow up, and it's so sad to see them go through even more tough times in such a public matter.