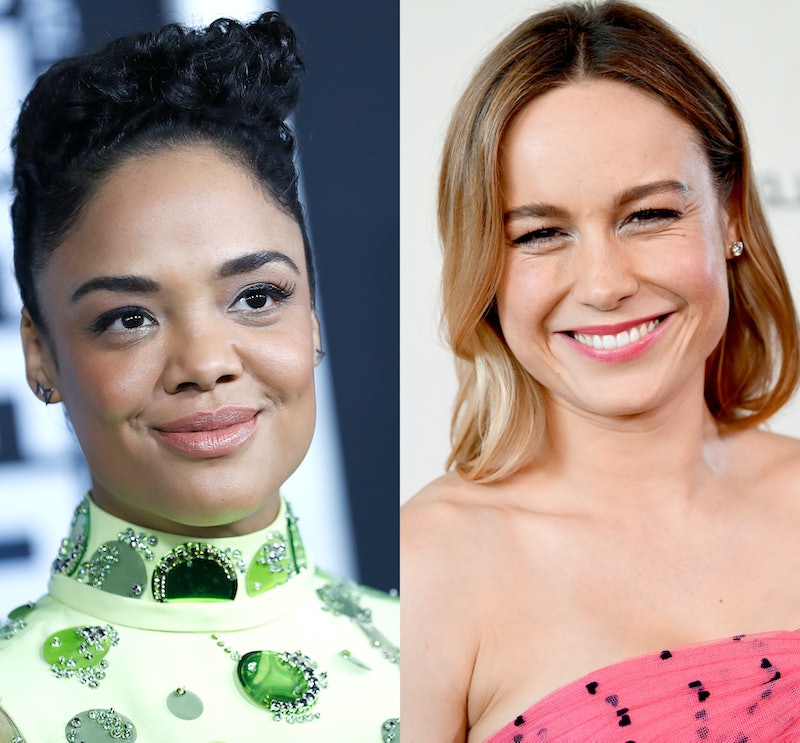 The actors at the forefront of the Time's Up movement are working to make Hollywood a more inclusive place. Nowhere is that more apparent than in The Hollywood Reporter's recent interview with Brie Larson and Tessa Thompson about inclusion riders. It's clear from their conversation that these two actors are dedicated to diversity both on and off camera.

While talking about their dedication to having people of color as crew members, the two stars noted that on some of the Marvel projects they've filmed, there weren't as many people of color behind the scenes as there could have been. Thompson explained to THR, "Inclusion doesn't happen by mistake. It's also about creating pipelines where they don't exist." Larson added,

"There are not a ton of people of color on some of them, given how many people of color there are in Atlanta. In certain departments that might be understandable, but when you look at PAs, that doesn't make any sense."

And since her and Larson's Marvel projects were filmed in Atlanta, which has a population that is more than 52% Black, according to the U.S. Census, there should have been more people of color behind the scenes, the actors noted. (In terms of Marvel films, Thompson acted in Thor: Ragnarok, while Larson stars in the upcoming Captain Marvel.)

As THR explains, the term "inclusion rider" entered the mainstream conversation during Frances McDormand's Oscars acceptance speech back in March. The term was coined by Kalpana Kotagal, Fanshen Cox DiGiovanni, and Stacy Smith, the founder of USC's Annenberg Inclusion Initiative. Smith joined Thompson and Larson in the THR conversation to explain why the riders are so vital for Hollywood's future. Inclusion riders allow actors to request that a movie's crew be diverse, as well to request diversity among the actors starring in the film.

The magazine noted that Larson and Michael B. Jordan's upcoming movie Just Mercy is Warner Bros.' first movie to adapt an inclusion rider, at least officially. The movie is based on Bryan Stevenson's memoir about an innocent man, Walter McMillian, who spent six years on death row.

Larson explained to THR that the studio "wasn't quite [comfortable with] an actor implementing" the rider, so Jordan signed on as an executive producer on the movie, in addition to starring in it, so that he could add an inclusion rider to his contract. "The movie was made with more than 70 percent people of color, and it was the best experience I've ever had," Larson told the magazine.

During the conversation, Smith also noted that while some people may be "nervous about quotas," inclusion riders aren't a bad thing for Hollywood to adapt. "It's a very simple formula to create change," Smith told the magazine. If inclusion riders can help increase diversity among crew members, as well as among the actors on screen, that's a winning situation for everyone involved.

The Time's Up Legal Defense Fund is providing assistance to women from a variety of industries who've experienced sexual misconduct. But the actors behind the charge, including Thompson and Larson, aren't stopping there. Thanks to their promotion of inclusion riders and other diversity initiatives, Time's Up is at the forefront of progress in Hollywood, and it's exciting to see the changes ahead.