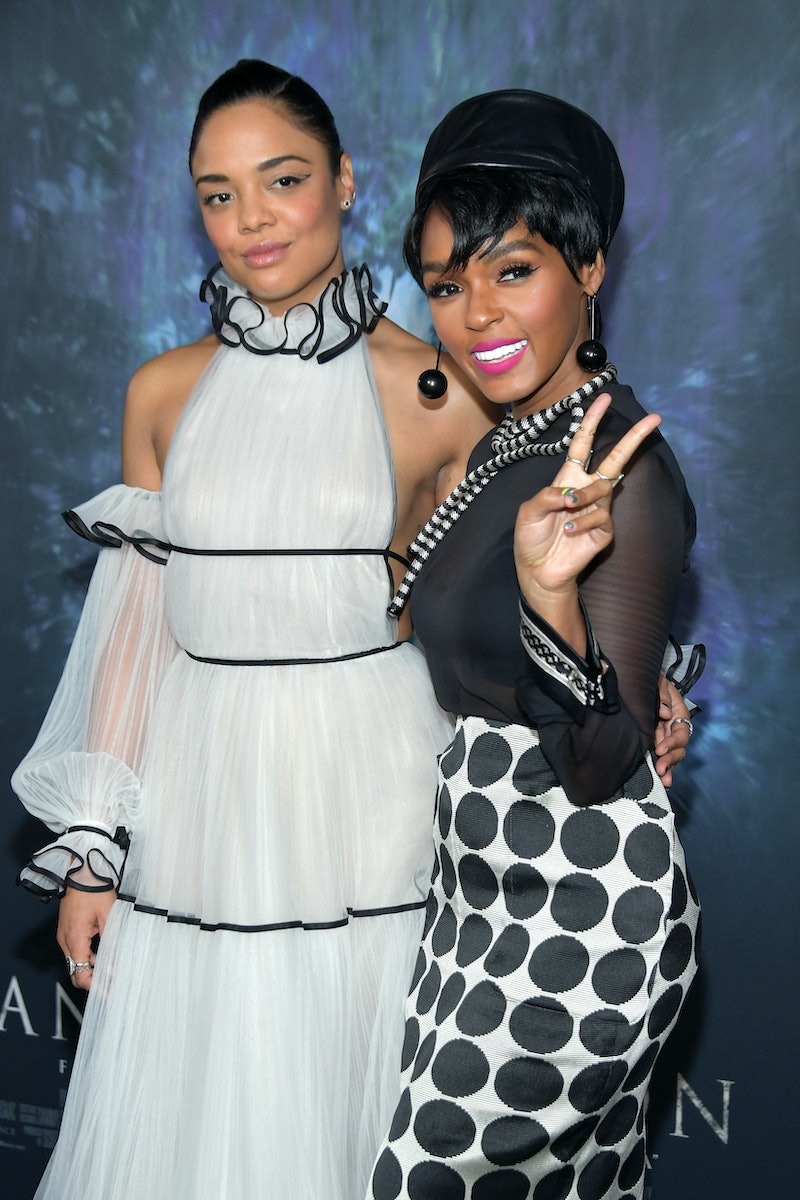 Tessa Thompson is known being outspoken, whether calling out injustice or lending her voice to advocacy efforts. In a NET-A-PORTER cover story published Friday, the actor spoke out in a different way, when Tessa Thompson came out as bisexual (though she did not use that term specifically), stating for the first time publicly that she's attracted to both men and women. She also addressed her rumored relationship with singer Janelle Monáe and their shared struggle to walk the line between public and private.

While Thompson did not disclose the exact nature of her relationship with Monáe in the interview, she revealed that the pair struggles with what to share with the public and what to keep to themselves. Thompson told the magazine, "It's tricky, because Janelle and I are just really private people and we're both trying to navigate how you reconcile wanting to have that privacy and space, and also wanting to use your platform and influence."

Thompson, whose new movie Sorry to Bother You hits theater on July 6, said she was raised by a supportive family, which has had an impact on the way she's dealt with her sexuality and her relationship in the public sphere. "I can take things for granted because of my family — it's so free and you can be anything that you want to be," she said. "I'm attracted to men and also to women. If I bring a woman home, [or] a man, we don’t even have to have the discussion," Thompson said.

While it wasn't their first professional collaboration, Thompson and Monáe fueled rumors of a romance after Thompson co-starred in the music video for Monáe's song, "Make Me Feel," and later appeared in the short film that accompanied musician's new album, Dirty Computer. The two never really commented on their rumored romance — until now. Thompson didn't get into specifics, but she told PORTER that she and Monáe, who came out as pansexual in April, are extremely close. "We love each other deeply," Thompson said. "We're so close, we vibrate on the same frequency. If people want to speculate about what we are, that’s okay. It doesn’t bother me."

Fans immediately took to social media to voice their happiness for Thompson, both for coming out and for acknowledging a close bond with Monáe. Even though she did not confirm any romantic relationship with the singer, fans are taking her comments as a sign that she and Monáe are helping to create LGBTQ representation in the mainstream, even at the expense of their privacy.

Many other fans celebrated Thompson's personal revelation on Twitter. @elenalvarez said, "tessa thompson really came out when pride month was about to end, she loves us that much what a legend," and @captvbucky tweeted, "hi uh i’m so happy that tessa thompson came out, i love her so much & it makes my heart so happy."

And writer Joanna Robinson, @jowrotethis, also tweeted, "Much much much love and respect to Tessa and Janelle for sacrificing some of their hard-won privacy for the sake of the larger visibility of the pansexual and bisexual communities. That’s an act of generosity."

Monáe previously opened up to Rolling Stone about her sexual identity in an April cover story, telling the magazine, "Being a queer black woman in America, someone who has been in relationships with both men and women — I consider myself to be a free-ass motherf**ker." Monáe went on to say that while she considered herself to be bisexual at first, she later realized that she identified more with pansexuality. She told the magazine, "I read about pansexuality and was like, 'Oh, these are things that I identify with too.' I'm open to learning more about who I am."

There is still no confirmation as whether Thompson and Monáe are in fact a couple, but it seems that Thompson doesn't mind people playing the guessing game. If their creative projects are any indication, they certainly make a great team, and here's hoping they'll collaborate again — in some form or another — in the future.