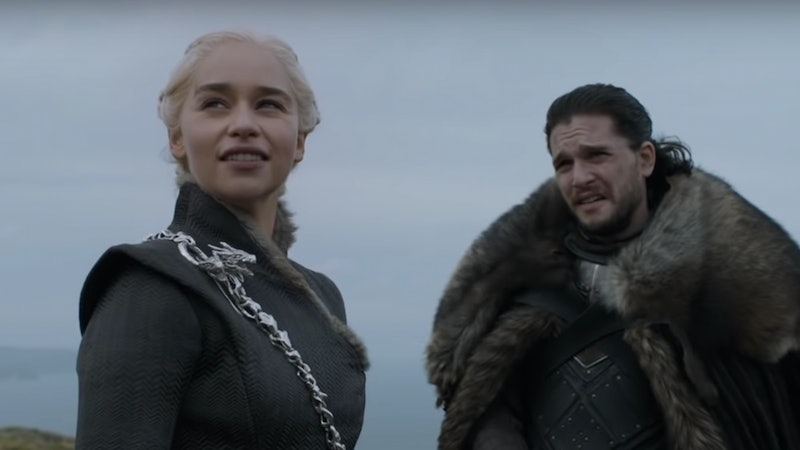 Another day, another supposed clue about the final season of Game Of Thrones. In the run up to the big day (the final season will premiere on April 14 2019), fans are in two camps: those who are desperately seeking any tiny tidbit of info and those who just don't want to talk about it. If you find yourself in the first camp, you may have come across a reportedly new picture of the Game Of Thrones cast that has sent social media running amuck. But, y'all, things are not as they appear. Grab a coffee and sit yourself down, because we're about to do some extreme analysing.

The photo in question appeared on Instagram on March 20, and showed the GoT cast members beaming and generally looking happy AF. However, eagle-eyed Instagrammers were quick to spot some missing characters: Kit Harington, Emilia Clarke, and Lena Headey. That's Jon Snow, Daenerys Targaryen, and Cersei flipping Lannister to you and me. (Cue Eastenders theme tune.)

Fans jumped into action (aka the comment section) immediately. Many assumed that this photo came after series eight had wrapped, and therefore told us something about the fate of our three favourite characters. One user named @rapper_karma said "Where is king of the north," while @mpinkys commented "The last suvivors???"

OK, so, is it true? Has this little wrap pic just revealed how the effing show ends? Well, not exactly. Despite reports that this photo was uploaded by none other than Peter Dinklage, aka Tyrion Lannister, it was, in fact, posted on a fan account.

As Digital Spy reports, this photo actually first shared on football club Sevilla FC's Twitter back in May 2018, "when the final season was still in the middle of filming."

I guess that's that then. But are there any more substantial clues we can call on in our hour of need?

Well, Dinklage has actually hinted at a potential demise for his character Tyrion in previous interviews. Speaking to Vulture in Oct. 2018, he was extremely cautious with his wording, but did divulge:

"I feel very, very — I’m trying to find the right word. I think he was given a very good conclusion. No matter what that is — death can be a great way out".

The word "conclusion" is about as vague as it comes, but Dinklage's comment to Vulture does seem to confirm the largest and most potentially accurate fan theory out there: that the gals of GoT will come out on top — namely the Stark sisters. Sisters Sansa and Arya have had an absolute nightmare of a life (like most women on this show). Early fan favourite Daenerys has always been touted to be the big boss at the end, but the fact is that she has been low-key losing it in the last few seasons. Literally burning people alive with her dragons and hooking up with her brother. (And yes, I know she didn't realise he was her brother, but still.)

There's less than a month to go before GoT season eight graces our TV screens, but I for can't wait to see the fan theories that emerge in the meantime.