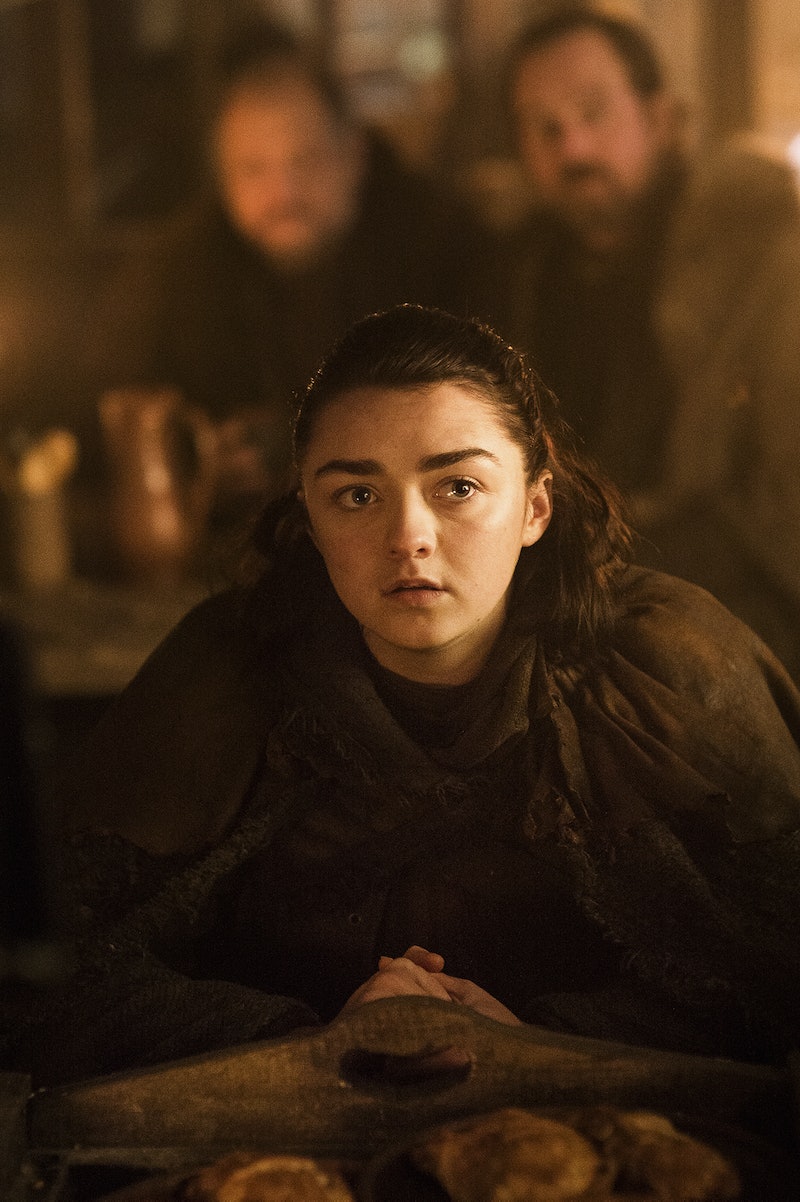 For Game Of Thrones fans, spoilers are a dime a dozen. Everyday there seems to be some brand new detail that leads to more fan theories that change everything. So, excuse me if the latest revelation about the Entertainment Weekly Game Of Thrones photo shoot has got me scratching my head. Last week, the magazine set up a Stark family reunion that gave fans new photos to obsess over until the show returns July 16. While some claimed this photo shoot proved that the four remaining Starks were going to actually share some screen time this year, Hollywood Life noticed something interesting about Arya's Game of Thrones Season 7 outfit that could be a clue to a major death.

If you look close in the cover photo below, there's a small dagger clipped to Arya's belt — a knife that looks a whole lot like the one Petyr Baelish carries. The one, as Hollywood Life pointed out, Baelish has bragged was a complete original, the only one of its kind in “the whole seven kingdoms.” The fact that Arya not only has it, but is wearing it with pride, seems to imply that Littlefinger is no longer with us.

Now, this should be a major spoiler. After all, Littlefinger has been scheming since the very beginning. But, for those who've seen the latest Game Of Thrones Season 7 trailer, it just isn't.

That's because in the Season 7 trailer, Jon Snow is going after Littlefinger. Though, honestly, blink and you may have missed the shot of Jon Snow putting his hand around Littlefinger's throat, which can't be a good sign for the man who helped seal Ned Stark's fate and forced Sansa into an abusive marriage to Ramsay Bolton. But, more importantly, this shot already had fans questioning Littlefinger's fate. The realization that Arya is wearing Baelish's knife isn't so much a major spoiler as it is another piece of the Littlefinger puzzle.

This clip of Jon Snow getting physical with Baelish could be a sign of his end. With all the dirty things Littlefinger has done behind the scenes, Jon Snow could be willing to sacrifice him and take his knife as proof that he is gone. Or, better yet, he lets Sansa give Baelish the same grisly ending she gave Ramsay Bolton treatment for how he's used her to to get what he wants.

But Jon Snow is honorable, so it's possible he locked Littlefinger up, knowing that he has some intel on the seven kingdoms that could be helpful in the days to come. If he's in prison, he would be stripped of his possessions. If that's the case, Arya having the knife could be our greatest sign yet that she is going to meet up with Jon Snow at some point this season.

But let's not pretend Arya couldn't be responsible for Baelish's death, if he is in fact dead. He's not on Arya's kill list, but this doesn't mean she wouldn't make an exception for this dishonorable man who set everything in motion when he betrayed her father. He's the reason her mother Catelyn died and her brothers Robb and Rickon were killed. If she catches wind of that little fact, she may be willing to amend that list of hers.

And that fact right there is why Game Of Thrones fans believe the Starks are going to bring about Littlefinger's downfall. Earlier this year, the Game Of Thrones news site Winter Is Coming speculated that this would happen in Season 7, writing that it all comes back to something Baelish said to Sansa two seasons ago. "There’s no justice in the world, not unless we make it," he told her. "You loved your family. Avenge them."

If Jon, Sansa, Bran, and Arya find out Baelish is the reason they're all in this position, it's to be assumed that one of these Starks, if not all of them, is going to get their revenge. Maybe we shouldn't get used to seeing Baelish around for much longer.