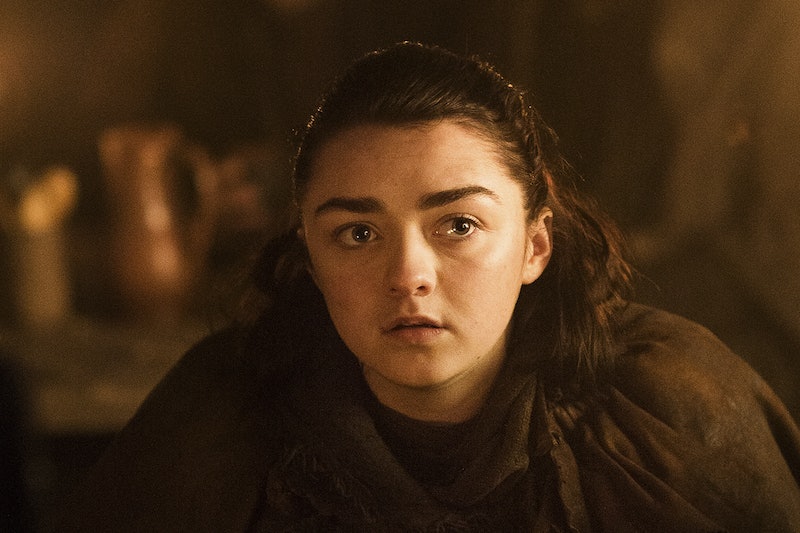 With just under two months to go until the season premiere, and still without a trailer in sight, fans have to content themselves with a new crop of Game Of Thrones Season 7 photos to tide them over until the new batch of episodes debuts in July. Thankfully, the most recent series of pictures released by HBO are quite juicy, showing just how big Dany's dragons will be when they next turn up… and also hinting at another long-awaited homecoming. Will Arya and Jon reunite in Game Of Thrones Season 7? If these new stills are any indication, viewers could be in for one heck of a Stark family reunion.

In one of the photos, Arya is seen on horseback outside a castle gate. Could she possibly be arriving back at Winterfell for the first time since she left with her doomed father in Season 1? In the first series of Season 7 pictures that was released, Arya was seen in a room whose amber hues more closely resemble what we know of the Riverlands and its many inns of the kind she used to frequent while traveling the continent with the Hound (above). Compared to that photo, this new look at Arya has a decidedly more Northern atmosphere about it, thanks to its blue hues, gray stones, and her heavy cloak.

Although it's not yet confirmed whether the castle Arya is arriving at is actually Winterfell, the fact that she's almost certainly somewhere in the North at least seems to indicate that a new Stark reunion is in the cards. And with Bran also heading south from the Wall, the show could soon have all four surviving Starks in the same place for the first time since the series premiere. Remember how heartwarming it was to see Jon and Sansa reunite last season? Now amplify those warm and fuzzy feelings threefold.

While you might assume that George R.R. Martin is too cruel to actually allow such an anticipated event to take place, there is evidence that the homecoming could be in the cards. Back in October, Maisie Williams (Arya) and Isaac Hempstead Wright (Bran) were seen on set together in Northern Ireland (where scenes at both Winterfell and Castle Black are filmed); and although they were not photographed together, Kit Harington (Jon) was also known to be in Belfast on the same day as Williams and Wright.

So if Arya does return to Winterfell and does reunite with her siblings in Season 7, what does that mean for her storyline? Last viewers saw her, the newly-trained assassin was recently returned to Westeros and executing Stark enemy Walder Frey. But even with the perpetrator of the Red Wedding finally dead, there are still plenty of names left on Arya's "list," including Cersei Lannister (for arresting her father), Ilyn Payne (for executing Ned), the Mountain (for torturing people at Harrenhal), Melisandre (for kidnapping Gendry), and Beric and Thoros (for giving Gendry to the red priestess).

If Arya's returning home already, does that mean she's finished crossing off those names? While it's possible that she may cross paths with Melisandre and the Brotherhood Without Banners soon — given that the former is heading south from Winterfell and the latter is heading north from the Riverlands — it's unlikely that she'll have completely finished her mission of vengeance by the time she arrives at her family's castle, given that Cersei is currently in King's Landing, in the opposite direction from Winterfell.

It seems equally unlikely that Arya will simply give up on her mission… so if she's headed for Winterfell already, it could only be to enlist her siblings' help in marching against the Iron Throne and taking out Cersei once and for all. If that is indeed her goal, then she's likely to be disappointed: at this point, Jon is far more concerned with the impending invasion of White Walkers than he is with the political maneuverings in the Red Keep. (Remember, Arya has been over in Essos for two seasons, where she probably hasn't heard much about the Night King's terrifying progress.)

If another heartwarming Stark reunion seems too good to be true on this show… well, it might be. Leave it to Game Of Thrones to cheer its viewers up with the sight of Jon and Arya finally reuniting — only to immediately and literally pull them in opposite directions. What will happen when Jon declares his intentions to march north and Arya declares her intentions to march south? What will happen when Arya learns that her favorite sibling is less interested in avenging their family than he is in a suicide mission against the White Walkers? Will the Starks remain allied for long? Or will they find themselves breaking apart under the stress of conflicting agendas?

Viewers won't learn the answers to these questions until Game Of Thrones Season 7 premieres on July 16… but I'm afraid the outcome of the latest Stark reunion will be more bittersweet than anticipated.