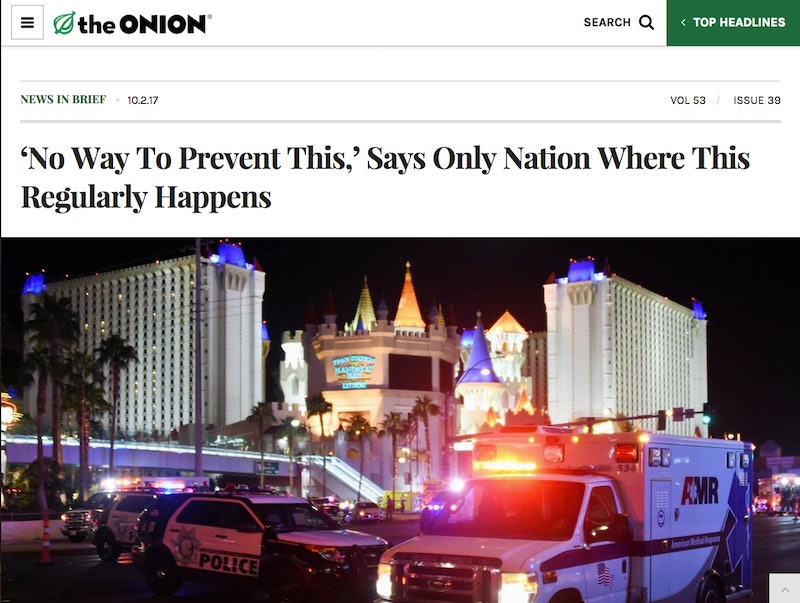 Waking up on Monday morning to news of the Las Vegas mass shooting that killed 58 and injured more than 500 people — making it the deadliest mass shooting in modern US history — felt sad, and horrific, and terrifying, and all the other things hearing about a massive loss of innocent human life makes you feel. But for many of us, there was also a sense of deja vu about how the day would play out: we’ll take to social media to demand gun control; politicians — including some who have voted against gun control — will make statements offering their “thoughts and prayers;” some people will say it’s “too soon” to discuss gun control; others will claim that having more guns out there could have prevented the tragedy. We’ll have the fevered search to determine the shooter’s ethnicity (white is, of course, the only color of “lone wolves;” people with any other skin colors are terrorists), the heartless hoaxes and conspiracy theories, and people invested in shrugging their shoulders and saying that nothing could have prevented this. It would almost be funny, if it wasn’t one of the most depressing things in the world.

There’s only one piece of art that truly captures what it’s like to live through this over and over and over, and it’s not a Pulitzer-winning work of journalism or a hard-hitting documentary: it’s an article by the Onion. The article, “‘No Way To Prevent This,’ Says Only Nation Where This Regularly Happens” was first published in May 2014, in response to the Isla Vista murders committed by Elliott Rodger. But in the intervening years, the site has published the same exact article after the 2015 mass shooting in Charleston, SC, Roseburg, OR, and San Bernadino, CA, and on October 2, 2017, after the Las Vegas massacre — each time changing nothing but the details of the attack and the name of a fictional commentator, who lives far from the site of the shooting, and dismisses the situation as something that “just happen[s].” “It’s a shame,’” the interviewee shrugs, “‘but what can we do? There really wasn’t anything that was going to keep this guy from snapping and killing a lot of people if that’s what he really wanted.”

Serving as an emotional mirror for Americans in the wake of tragedy isn’t new for the Onion — their coverage in the wake of 9/11, which included articles like “God Angrily Clarifies 'Don't Kill' Rule” and “Not Knowing What Else To Do, Woman Bakes American-Flag Cake,” still leaves me on the verge of tears 16 years later. As Onion writer John Krewson told yahoo.com in 2011 of the 9/11 issue, "It wasn't an especially funny issue. In fact, I'd say it was the least funny issue we've ever done…But it was cathartic,” noting that it was the most commented-upon issue of the publication at the time, and that nearly all the feedback they got was positive. When we barely had the words, the Onion was able to say what we were thinking — that we were confused, that we felt helpless, that this flew in the face of everything we’d ever been taught growing up about how the universe works.

9/11 was, of course, different than the mass shootings that, according to a 2015 New York Times article, occur every single day in the U.S. And the Onion’s coverage is different, too — instead of engaging our confused vulnerability the way the 9/11 coverage did, the Onion’s repetition of the mass shooting article gets at the hollow sameness, the Groundhog Day feeling that fills your chest when you get yet another push notification that says “shooting.”

Throughout the Trump presidency, a lot of us have been joking about the passage of time — that every week with him in office feels like six months, that outrages happen so often these days that fairly recent events (like Trump’s original travel ban, which only occurred 8 ½ months ago) feel like they occurred years ago, just because there’s been so much to deal with, so much to cope with. These jokes — and god knows I make them, too — do more than just give us an outlet, or a moment of bonding. They give us an out. They let us say, “Well, how could anyone possibly stay angry about this much stuff, for this long? It’s impossible.” And maybe it is.

But the genius of the Onion recycling this article is the way it flies in the face of this sentiment.

The genius of the Onion article is that it doesn’t let us hide behind this excuse. It reminds us that even things that feel like brand-new problems — a travel ban, another shooting, attempts to take health care away from our country’s most vulnerable citizens — have long, long roots. And it’s on us to make change if we don’t want to keep seeing the same headlines every damned day.