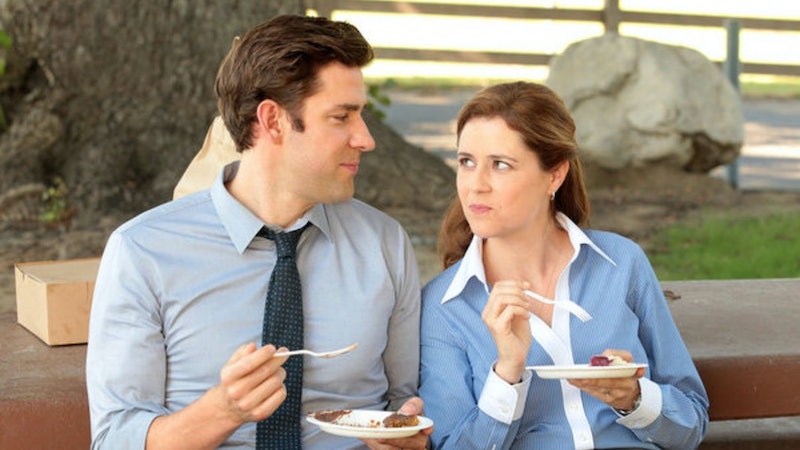 Jim Halpert, in all his jello stapler glory, is nothing but an expert pranker, but his real-life counterpart could probably benefit from a crash course in the art of a good trick. In all their years together, it turns out John Krasinski pranked Jenna Fischer on the Office set only once. Fischer dished on the funny behind-the-scenes moment when Krasinski appeared on Office Ladies, the podcast she hosts with fellow Office alum, and BFF, Angela Kinsey.

Christened the “one fully-formed, good-throughout prank,” Fischer recalled, "It was at Schrute Farms and you and I had this scene where we had to drive up to the farmhouse several times; and we're doing it and I am getting increasingly more hot." She continued, "I’m sweating. I’m like, 'Oh my god, it's so hot,' and we had to turn off the AC for sound and you're like, 'Yeah, I don't know, I'm OK, but you’re hot, huh?'"

As it turns out, Krasinski actually had a hand in the car’s rising temperature. Fischer said, “This went on for like 15 minutes, and all of a sudden you started snickering and you had turned on my seat warmer all the way to the hottest setting.”

Krasinski then admitted that he’s “terrible at pranks,” and he actually stole the idea from George Clooney, who pulled the same prank on him when the two were filming their 2008 sports comedy film Leatherheads. “So that's how unoriginal I am,” Krasinski admitted. "I was like, 'I'm gonna take George Clooney's bit and do it to Jenna,' and I thought that would make me cool.”

All jokes and pranks aside, the various Office virtual reunions have proved to be the ultimate bright spots amid quarantine.