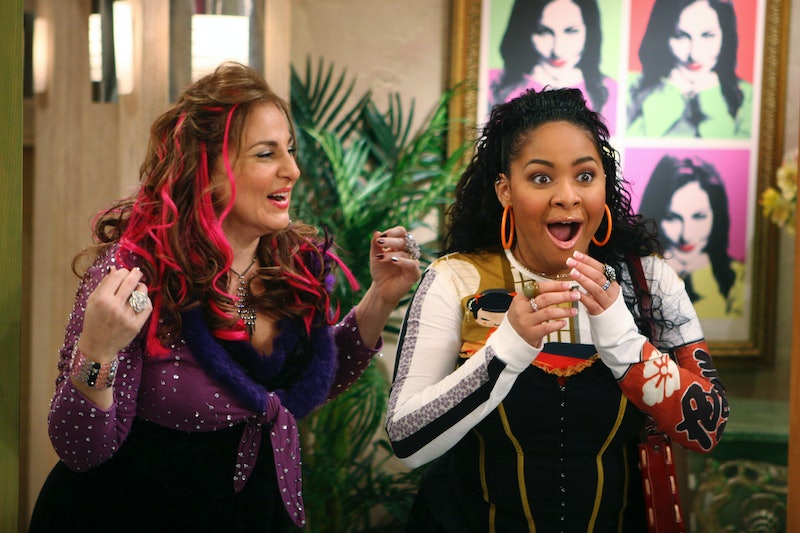 Disney has been suspected in the past of sneaking in adult references and content for older viewers to discover, but this old joke from a Disney Channel original TV show is a whole different story. That's So Raven had an R. Kelly joke in a Season 2 episode, and somehow, we all missed it. The previously forgotten joke was discovered in the wake of Disney+ making all That's So Raven episodes available to rewatch, when Twitter user @_trinityyj shared it on Monday, Nov. 18, and it has since gone viral on social media.

The joke originally aired in 2004, in Episode 12 of the show's second season, entitled "There Goes the Bride." In the episode Raven sees in a vision that her beau, Devon, bought a wedding ring. She thinks it's for her, but later finds out that the ring belongs to his dad, who's getting married. Oh, and his family is moving to Seattle after the wedding. To prevent Devon from leaving her, Raven attempts to stop the nuptials by impersonating the bride (complete with her long veil) and confessing her love for Devon at the altar. Only it doesn't go quite as planned, as the attendees still think she's the bride while she makes her grand gesture.

"I love your son," Raven tells Devon's father in the clip, to gasps of shock in the crowd. When she clarifies that she's only 15, the crowd becomes even more scandalized. Even Eddie and Chelsea are cringing in the background. And that's when you can hear a background character in the scene comment, "Who is that? R. Kelly?"

The comment is quick and difficult to hear among laughter from the audience, which could explain how it made it to air. Furthermore, the joke was unscripted. Sarah Jane Cunningham, who co-wrote the episode with Suzie V. Freeman, confirmed to Bustle via e-mail that the line was an ad-lib. Bustle also reached out to Disney for comment, but did not receive an immediate response.

The joke seems to be a reference to R. Kelly's infamous, and unsettling, history of inappropriate relationships with underage women, specifically his illegal marriage to late R&B singer Aaliyah in 1994, when he was 27 and she was only 15. When the episode originally aired in 2004, jokes about the musician's alleged sexual encounters with underage girls were more common, despite the fact that he faced child pornography and abuse charges in 2002 — he was acquitted in 2008. In fact, in the responses to the That's So Raven clip, Twitter user @_Gyaldemsugar shared a clip showing a different R. Kelly joke in a 2006 episode of Everybody Hates Chris.

Since then, Kelly's career has been plagued with multiple accusations of sexual crimes, including child pornography and abuse charges in 2002, for which he was not convicted, and frightening accusations of holding women against their will in a "cult" in 2017. After the Lifetime docuseries detailing allegations of sexual assault against the musician, Surviving R. Kelly, aired in January of 2019, Kelly was charged with sex trafficking and child abuse images and obstruction of justice in Chicago, along with additional charges of sex abuse in New York and prostitution in Minnesota, per the BBC. He has pleaded not guilty to all charges, and is currently being held without bail.