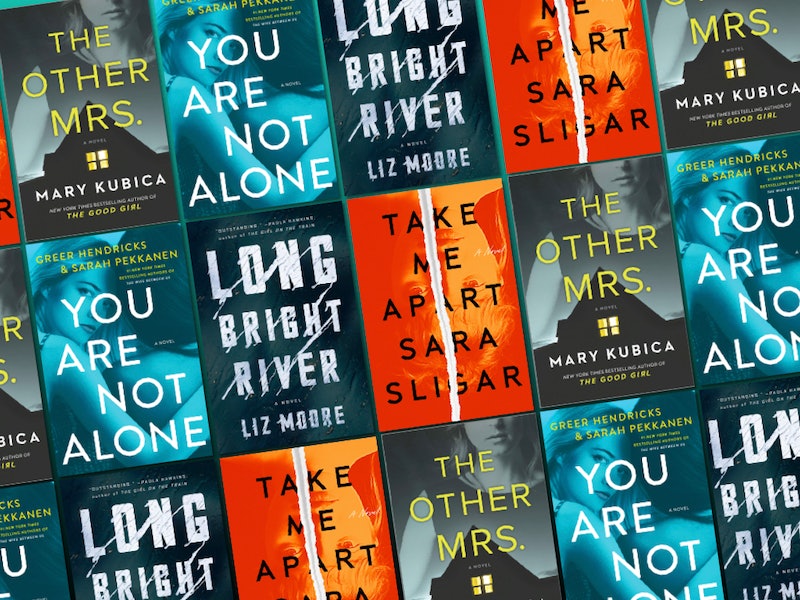 Was "reading more" one of your 2020 goals? Sometimes the options of where to start and what to read can be overwhelming — there is no shortage of content out there — but if horror and thrillers are your genre, Goodreads users have your back. Below is a list of the top 10 most anticipated thrillers of 2020, plus everything you need to know about the year's hottest picks.

Moving into the RAWRing Twenties, it's clear that readers love mysteries. Goodreads users have also identified their most anticipated books of 2020 in general, and Liz Moore's Long Bright River — a timely novel that deals with opioid addiction — tops both that list and this one. Fans of the genre are in luck, because the first half of 2020 will see new releases from Andrea Bartz, Mary Kubica, Simone St. James, C.J. Tudor, and writing duo Greer Hendricks and Sarah Pekkanen. Liv Constantine, Samantha Downing, Sarah Pinborough, and Lori Rader-Day also have new books out this winter and spring, which you can check out on the full list of Goodreads users' highly anticipated 2020 thrillers.

Ready to bring a delightful little chill to your nightstand, here are the 10 most anticipated horror novels and thrillers of 2020, as chosen by Goodreads users:

A series of multiple murders intersects with the disappearance of an investigator's troubled sister in this new novel from The Unseen World author Liz Moore. Mickey and Kacey aren't on speaking terms. One is a Philadelphia cop and single mom, the other a sex worker whose substance addiction mirrors the sickness that sent their parents to an early grave. When Kacey goes missing amid a string of homicides, Mickey is thrust into a race against the clock to find her sister, and a killer, before it's too late.

Three years ago, Gabe's life changed forever when his wife and daughter disappeared from their home. Everyone thinks his family is dead. No one believes Gabe when he tells them that he saw his 5-year-old daughter, Izzy, in the backseat of a rustbucket on the busy highway that night. No one understands why he's given up everything to drive up and down that lonely stretch of the M1, searching for answers. But Gabe knows Izzy is still out there somewhere, and he'll stop at nothing to find her.

When Will Foust's sister dies by suicide, he relocates his wife and sons to her home, situated on a quiet Maine island, to support his newly orphaned, 16-year-old niece. As the family begins to crumble under the weight of tragedy, another terrible shock sends ripples through their coastal community. The Fousts' neighbor, Mrs. Baines, has been found murdered in her home — and Will's wife, Sadie, is the prime suspect.

Carly's aunt disappeared 35 years ago, vanishing while working a night shift at the Sun Down Motel in Fell, N.Y. Determined to learn what happened to Viv all those years ago, Carly applies for — and gets — a job at the same rundown establishment. Situated behind the Sun Down's desk, however, Carly discovers that a lot of women went missing in Fell before Viv, stumbling upon a mystery that may have led to her aunt's disappearance.

You Are Not Alone by Greer Hendricks and Sarah Pekkanen (Mar. 3)

From the authors of An Anonymous Girl comes this new novel about four women connected by one's tragic death. Shay saw Amanda kill herself, and the lingering trauma drove her to research the other woman's background — which included the beautiful and alluring Moore sisters, Jane and Cassandra. Amanda was one of their closest friends, and her death has left a vacancy that only Shay can fill. As the Moores give their awkward new acquaintance a makeover, however, Shay comes to realize that there's as much in them to be feared as loved.

The Boy from the Woods by Harlan Coben (Mar. 17)

A former feral child takes center stage in this new novel from Harlan Coben. Wilde was a teenager when a pair of hikers pulled him out of the woods and into civilization. Now in his 40s, he finds himself called back to the wilderness when his godson's friend, Naomi, vanishes. The girl was bullied in school, and others are quick to label her a runaway. Wilde knows something is up, but can he find her before it's too late?

Rose Gold Watts always believed her mother when she told her that she was sick, frail, and fragile. It was only after she began chatting online with her boyfriend that Rose Gold realized she was a victim of Munchausen syndrome by proxy. Five years after the dramatic trial that sent Patty Watts to prison for abuse and neglect, she's a free woman, and Rose Gold has just offered her a place to stay, shocking their small town. Does Patty still have Rose Gold wrapped around her little finger, or does her daughter have plans for her former abuser?

Drama engulfs the titular co-working space in this new novel from The Lost Night author Andrea Bartz. When The Herd's founder, Eleanor Walsh, disappears on the night of an announcement that has been months in the planning, there's no shortage of suspects. Eleanor's BFF, Hana, was one of the first Herders and has been working hard on the next step in The Herd's development, while Hana's sister, Katie, has been eyeing Eleanor as the subject of her next book. Now, they're investigating separate mysteries, both connected to Eleanor, as they try to understand what went wrong in the other woman's life.

Sara Sligar's debut novel centers on a well-known photographer whose death has remained a mystery for decades. Kate Aitken takes on the job of archiving Miranda Brand's portfolio at the behest of Miranda's son, Theo. As she sorts out the details of Miranda's personal life, Kate finds herself growing closer to Theo. But Kate has a secret of her own to keep, and finding out just who Miranda was — and how she died — may tip Kate right over the edge.

From the author of Behind Closed Doors comes this new thriller about a birthday party gone horribly wrong. Livia's 40th birthday bash has been a meticulously planned affair, thanks to her husband, Adam, who always aims to please. Livia and Adam have big secrets they're keeping from each other, however, and those secrets are coming out today, no matter how hard the couple tries to rein them in.