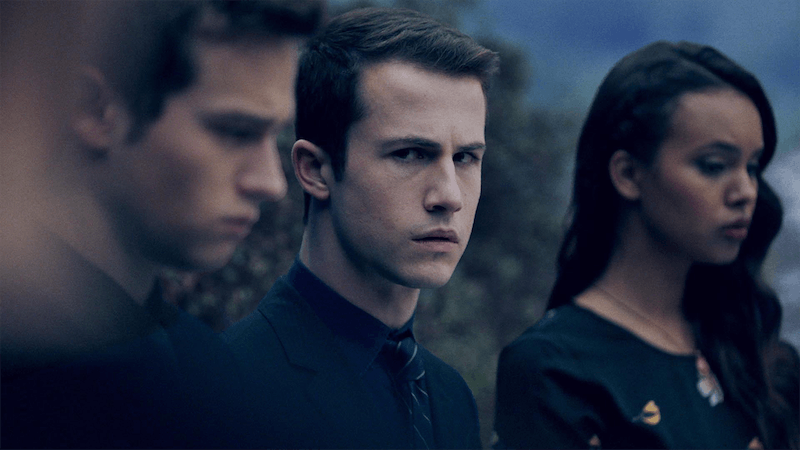 Even since the traumatic cliffhanger ending of 13 Reasons Why Season 2, fans have been desperately wondering what will happen in the next chapter of the controversial Netflix show. Now, the time has finally come. The 13 Reasons Why Season 3 trailer is finally here, and it teases a shocking new mystery, and potential major death, and confirms the season's Aug. 23 release date.

The trailer, released on Thursday, Aug. 1, shows the gang holding a funeral for... Bryce Walker! But, while the show's villain might be dead, the real question is: who killed him? That's what his mother is asking in this new teaser, and absolutely everyone is a suspect. "I need to know what happened to my son," she said to Clay, Justin, Jessica, Alex, and the rest of the group. "If any of you know anything, please say something."

Spoiler alert: Season 3 will pick up right where Season 2 left off, as Clay and Tony just barely stopped Tyler from walking into Spring Fling and committing a devastating school shooting. Given that Season 2 ended with Clay standing outside with Tyler's gun as police cars approached, and the specific focus on Clay in the teaser, all eyes seem to be on him this season.

According to a press release obtained by Bustle, Clay, Tony, Justin, Jessica, Alex, and Zach will work together to cover up Tyler's plans and help him through his recovery, but the "disappearance" of Bryce puts everyone's futures in jeopardy. The Netflix synopsis reads, in part:

"When the aftermath of a tumultuous Homecoming game culminates in the disappearance of a football player, and Clay finds himself under police scrutiny, it’s up to a shrewd outsider to steer the group through an investigation that threatens to lay bare everyone’s deepest secrets. The stakes are raised as the consequences of even the most well-intended actions can alter a life forever."

The trailer clearly states that Bryce was killed, complete with a funeral, his grieving mother, and a title card that leads viewers to a mysterious website called whokilledbrycewalker.com. But given that Netflix used the word "disappearance" in the official Season 3 summary, it's truly a mystery on whether the terrible rapist is still alive.

The third season will feature the return of most of the show's main cast, including Dylan Minnette, Brandon Flynn, Alisha Boe, Ross Butler, Miles Heizer, Christian Navarro, and Justin Prentice. Season 3 will notably be the show's first without Katherine Langford, who portrayed Hannah, the girl that started it all by recording the tapes that sent everyone spiraling in the wake of her tragic suicide.

Along with the release of the Season 3 trailer, Netflix also announced that 13 Reasons Why has received an early renewal for a fourth and final season. According to The Hollywood Reporter, the show's final season is currently in production and will revolve around the gang's graduation from high school, but no premiere date has been set quite yet.

No matter what the future holds for the 13 Reasons Why kids, fans should get ready for an emotionally thrilling and exhausting journey ahead.

More like this
Nicola Coughlan Shared A Lady Whistledown Excerpt From ‘Bridgerton’ Season 3
By Grace Wehniainen, Alyssa Lapid and Sam Ramsden
Here's When 'The Crown' Season 5 Will Premiere — And What To Expect
By Bustle Editors
The New Bachelor Will Be Announced Next Week & Here Are The Top Contenders
By Grace Wehniainen
The 'Andor' Timeline, Explained
By Gretchen Smail
Get Even More From Bustle — Sign Up For The Newsletter