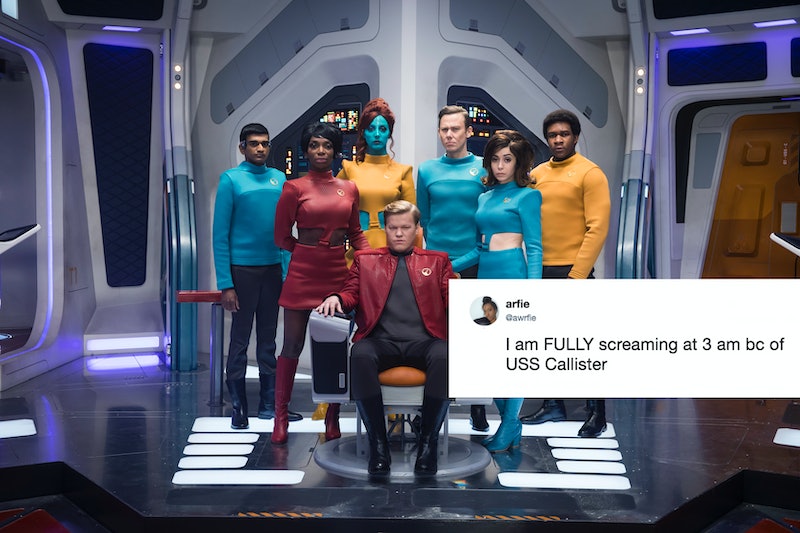 The Netflix sci-fi anthology series Black Mirror returned for a chilling Season 4 on Dec. 29, and, like Season 3 episode "San Junipero," Season 4 has an obvious breakout hit with "USS Callister." The tweets about the "USS Callister" episode of Black Mirror have been pouring in, and they don't seem to be stopping anytime soon. The Star Trek-style parody episode is brightly lit and populated with familiar faces; a TV buff would be quick to point out Jesse Plemons of Friday Night Lights and Breaking Bad, and Cristin Milioti of How I Met Your Mother. But what begins as a '60s-styled romp through space quickly devolves into something much more sinister, as the eerie series loves to do.

As creepy as it might be — Black Mirror loves to get under its viewers' skins — this particular episode is already a fan favorite. It's among the first to pay loving homage to the sci-fi greats of decades past, and its tone is lighter than other episodes from Season 4. It also tackles sexism, racism, and everything else wrong with that era — not just of television, but of the world.

For these reasons and more, Twitter is going wild for "USS Callister," so here are the best tweets about the Black Mirror homage to Star Trek:

1. You Never Saw That Coming

It's not Black Mirror without one, right? Even when you think you have it figured out.

"USS Callister" is so good, it's out here snatching wigs. Actually, that's a terrifying image.

3. Welcome To The Roller Coaster

"Mumble jumble SO GOOD" is the best possible outcome, really.

4. The Episode Is A Brain Teaser

Of course, so is every episode of this show, let's be real.

You're not misreading. This reaction to Black Mirror Season 4 is all from the first episode.

This seems to be the general overall sentiment.

Oof. Well, hey, Black Mirror has yet to do anything halfway.

Anxiety is the worst, of course, so the concept of "super anxiety" is so beyond our imaginations.

Another perfect gif to describe every episode of Black Mirror, honestly.

The point still stands, whether this is Twitter or a college paper.

12. Sorry To Your Neighbors

This is your life on Black Mirror.

Do all of the "USS Callister" fans know the password to a secret club where the only topic of discussion is perfect .gif selection?

14. The Boldest Of Claims

It is official. It's the best episode ever, and it's just the premiere of Season 4.

This tweet is best read with the sound of the losing horns from The Price is Right playing in the background.

16. Look At Your Choices

What are you even doing?

If there's one thing the fans' reactions to "U.S.S. Callister" have in common, it's this: Black Mirror's homage to Star Trek is downright mind-blowing. A cursory glance at people tweeting about the first episode of Season 4 reveals that whether they like it or they love it, the episode will stick with them for a while.