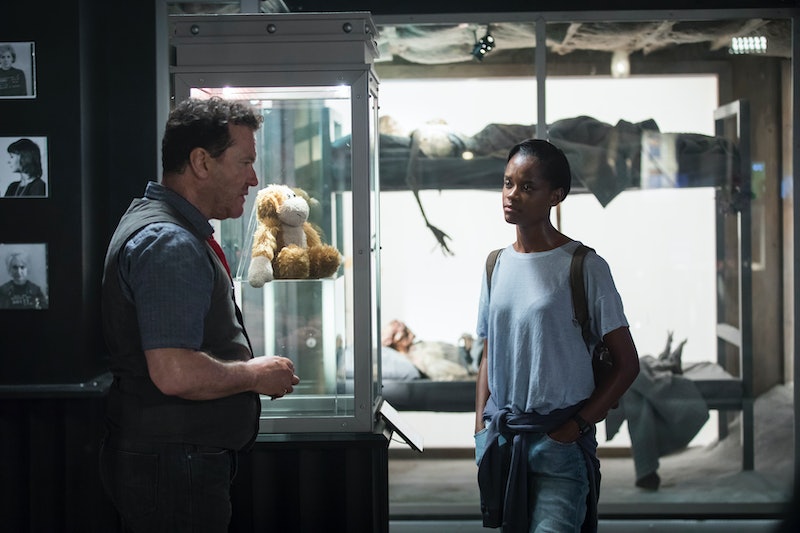 Each episode of Black Mirror introduces audiences to a brand new world with surprising new characters and terrifying new tech. While every installment seems to take place in a universe all its own, as the series has gone on, certain stories have begun connecting across episodes and referencing each other. There are no shortage of Easter eggs in Black Mirror Season 4, especially in its season finale, and they help pull the entire Black Mirror universe together. Whether tech from other episodes is popping up, iconic music cues are returning to the series, or actors are being seen again in bigger roles, there are plenty of references to dig through.

In a Reddit AMA, show creator Charlie Brooker revealed that the episodes "take place in the same psychological universe, certainly," further explaining that there are "sometimes explicit links" between episodes. While some episodes may share a fictional TV show, other episodes feature direct references to other episodes, whether that's technology or characters from Black Mirror past.

Even the most attentive viewers may miss these Easter Eggs the first time around, but there are shocking twists hidden in each of these episodes. So there's no television series that yearns for a second viewing quite like Black Mirror. Here's what you ought to be looking out for on that repeat marathon. Oh — and there will be SPOILERS for each of these episodes.

Black Mirror's season-opener appears to be a Star Trek pastiche, but like everything else in the show there is a dark, twisted underbelly to the shiny, colorful surface. It also features some subtle references to Season 3, including:

This Jodie Foster-directed episode finds the horror in app-enabled helicopter parenting, and gains a lot of traction by reusing previously seen tech.

"Hang The DJ" is Black Mirror's version of a romantic-comedy. It's got one of the most uplifting endings since Season 3's "San Junipero," but doesn't feature many references to past episodes. However, attentive viewers may recognize the dating app seen at the end of "Hang The DJ." The receptionist at Callister is seen swiping the very same dating app at the beginning of "USS Callister."

"Metalhead" is Black Mirror's most sparse episode yet, having been filmed entirely in black and white, and featuring almost no dialogue. However, the dialogue that is featured in the episode harkens back to the show's very first episode. "Metalhead" begins with an extended conversation about the pigs that no longer occupy farms. The Prime Minister in "The National Anthem" surely dreams of a world without pigs based on his history with the farmyard animal.

Black Mirror saved its most fan-service friendly episode for the very end of Season 4. Rolo Haynes’ Black Museum is a smorgasbord of Black Mirror history. Rolo promises a collection of authentic criminological artifacts, and delivers by showcasing some of Black Mirror’s most criminal-laden tech.

Featured among Rolo’s many artifacts are:

In addition to the physical exhibits, "Black Museum" also features spoken references to "San Junipero," ("Like when they upload old people to the cloud.") and "15 Million Merits" is featured in the form of a graphic novel read by a character in one of Rolo's stories.

Of course, Rolo Haynes' museum is burned to the ground at the end of the episode, and all of the technology inside with it. It hasn't yet been confirmed if Black Mirror will return for a fifth season – but there's always a chance that one of the pieces of Rolo's "Black Museum" is simply the focus of a story that hasn't been told yet. Only on Black Mirror could fans possibly find Easter eggs for episodes that don't even exist yet.

More like this
'Bridgerton' S3 Teases Exciting Social Season For Penelope Featherington
By Bustle
How The Thanksgiving Episode Of 'Gossip Girl' Changed Pop Culture History
By Gabrielle Bondi
It May Be A While Before 'All American' Season 5 Drops On Netflix
By Grace Wehniainen
How Is The British Royal Family Related To The Romanovs?
By Karen Fratti
Get Even More From Bustle — Sign Up For The Newsletter