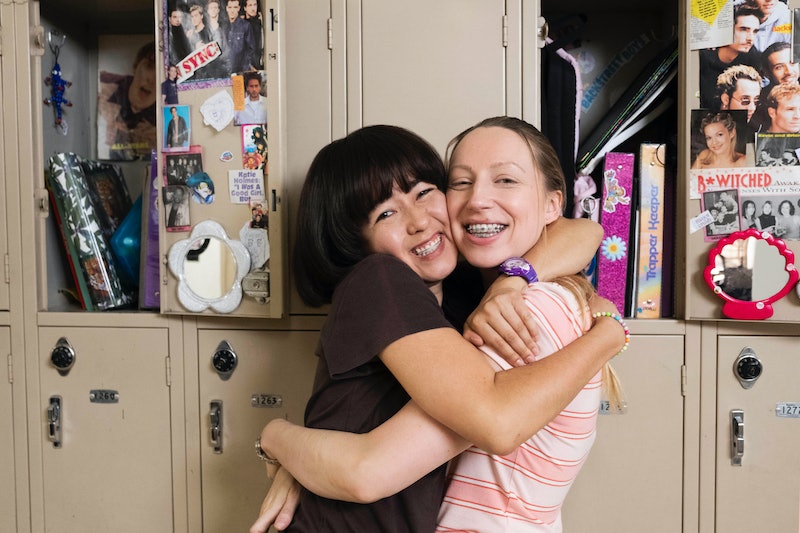 If you, like me, felt extremely seen watching PEN15, it was likely because of the show's unflinching realism. Seeing Anna and Maya stumble their way through seventh grade brought up awkward memories I would have preferred to leave in the past, but there was also something delightful about all the 2000s references in PEN15. It was cringey, yes, but oddly comforting, too.

Personally, I wasn't as cool as Maya and Anna in middle school, and that's not saying much. However, the pressures of your mom liking the friend sleeping over at your house more than you, being forced to hang out with girls who are mean to you, and not wanting to grow up or stop playing with dolls were all things I could relate to. Plus, yes I wore a pink puka shell choker — and still have it just in case that trend comes back. I also rocked Art Stuff roll-on glitter in my day, and definitely thought a bottle cap belt would make me look hardcore.

The specific references to that particular era is what gets me most about PEN15. Whether it's the way the mean girl's dress gives you (me) anxiety flashbacks, or how it makes you contemplate what song lyrics would be your away message in 2019, it's basically a perfect recreation of life in the new millennium.

If you have something to say, say it with gel pens and store it in a Trapper Keeper. I also once tried a rolling backpack like Maya's, but ultimately gave up. And in the pilot, they have pencils with chewed up eraser ends — which isn't really 2000s-specific, but highlights how attentive to detail the show is. Plus, check out the Brain Quest in Maya's other backpack. I, a nerd who preferred her games educational, had so many of those.

Much like Maya, my first screen name was accidentally gross in a way that totally went over my head. I won't explain it here, but it involves my first name and "Ubbi Dubbi" from Zoom. I completely forgot that AIM had chatrooms, too.

As much as I love the concept of an Away Message (imagine, in 2019, being truly "away" from social media ever) — I'm not that nostalgic for instant messenger. It is overall easier to communicate online now, and while exploring that for the first time was thrilling, it was complicated.

Burning A CD (And The Music In General)

Sure, the '80s mixtape is a very romantic concept to those of us now living with streaming music options — but not enough love is given to the decidedly less sexy mix CD that came between cassettes and Spotify playlists in time. Also, it goes without saying that the PEN15 soundtrack itself is full of nostalgic jams.

Anna and Maya's rooms have braided rugs, beanbag chairs, troll dolls, and other stuff you remember from being a kid in the '90s and '00s. Sylvanian Families was not my jam, per se, but in my middle school years I still tried to grasp on to similar toys like American Girl dolls, Polly Pocket, and of course Beanie Babies.

However, that see-through phone makes me so, so jealous. I wanted one so bad. I didn't even have a phone in my room.

Brendan leaves his Tamagotchi at the bowling alley in Episode 7. That's right, I noticed. Surely, the young actor just forgot to grab it in the take because he doesn't understand the significance. No self-respecting 2000s kid would leave a Tamagotchi or Neopet unattended. We used to throw fits when teachers made us keep them in our backpacks during class. If you didn't feed them, they could die!

It's always refreshing to see a coming-of-age story about girls instead of boys. There are far too few of them, even in 2019. Rehashing early-aught middle school doesn't exactly make me want to be young again, but it does kind of remind me that the days before all-consuming social media and streaming content were not actually that long ago.