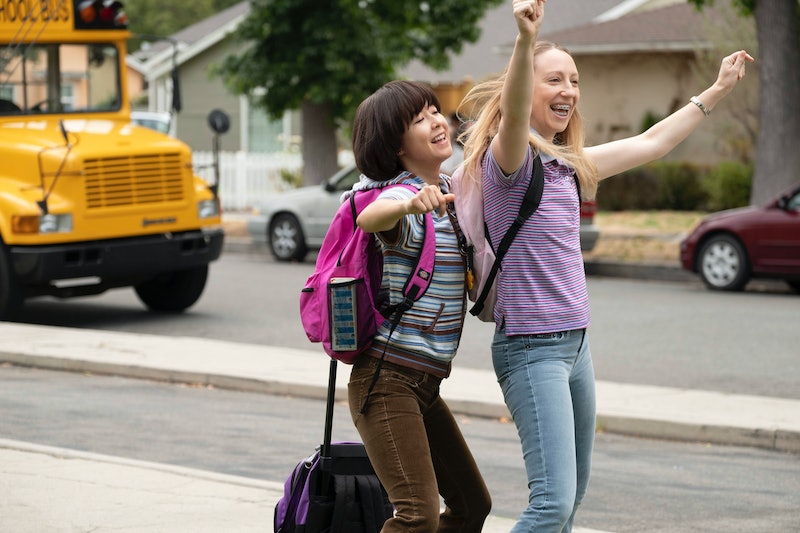 If you were rocking shimmery lip gloss, neck chokers, and butterfly hair clips as a preteen in the year 2000 (before the term tween even existed), then the Pen15 soundtrack is going to speak to you on a deeply personal level. The Hulu series from Maya Erskine and Anna Konkle is so jam-packed with tunes from the late '90s and early 2000s, it will surely give you flashbacks to middle school dances — or just dancing alone with your BFF in your bedroom to the sweet sounds of a CD (RIP).

All 10 episodes of Pen15's first season arrive on Hulu Feb. 8. Most of the cast members are legitimately middle schoolers — except for Erksine and Konkle, who play caricatured versions of their 13-year-old selves and somehow pull it off. The show is a stunningly realistic depiction of what it was like to be a barely-teen at the turn of the millennium — right down to the music. With artists including Lifehouse, Des'ree, 98 Degrees, 311, Nelly, The Spice Girls, K-Ci & JoJo, and, of course, N*SYNC, you'll be feeling that rush of middle school hormones all over again.

Just like the mix CD you made and listened to on your Discman, the soundtrack blends pop, R&B, rock, hip-hop, alternative, and rap. But the first song featured in the show is all bubblegum pop with Mandy Moore's "Candy," a debut single brave enough to rhyme "Mandy" with "Candy." If remembering Moore pre-This Is Us doesn't fill you with nostalgia, perhaps nothing will.

Another song that will hit you especially hard in the feels is TLC's "Unpretty." After "Don't Go Chasing Waterfalls," T-Boz, Left Eye, and Chilli clearly still had the magic of 1994's CrazySexyCool, considering their follow-up album FanMail gave the world "No Scrubs" and "Unpretty." The latter was there for you to sing to yourself in the mirror (maybe with a hairbrush mic?) or while you cried into your pillow whenever you felt self-conscious or left out.

If you want to have your own Pen15 dance party, here's the full soundtrack:

There are a few outlier songs that aren't from the 1990s or early 2000s. But even then, they help to set the tone. For example, the 1950s song "Love Is Strange" by Mickey & Sylvia was featured in that iconic Dirty Dancing scene of Johnny and Baby in the studio. And since 13-year-olds in 2000 were born in the '80s, it's safe to say nearly every preteen of that era had a dream of crawling on the floor with Patrick Swayze like that.

While most of the songs from Pen15 will take you back to the days of AOL dial-up, braces, and gel pen doodles in your notebooks, others have maintained their ability to move you — like The Cranberries' transcendent "Dreams." But whether you still rock out to some of the songs from the soundtrack or tried to block them for your memory like that time you mortifyingly got your period unexpectedly in class, Pen15 will remind you that while it was certainly awkward, being 13 in the year 2000 wasn't all bad when you had songs like these to sing along to.