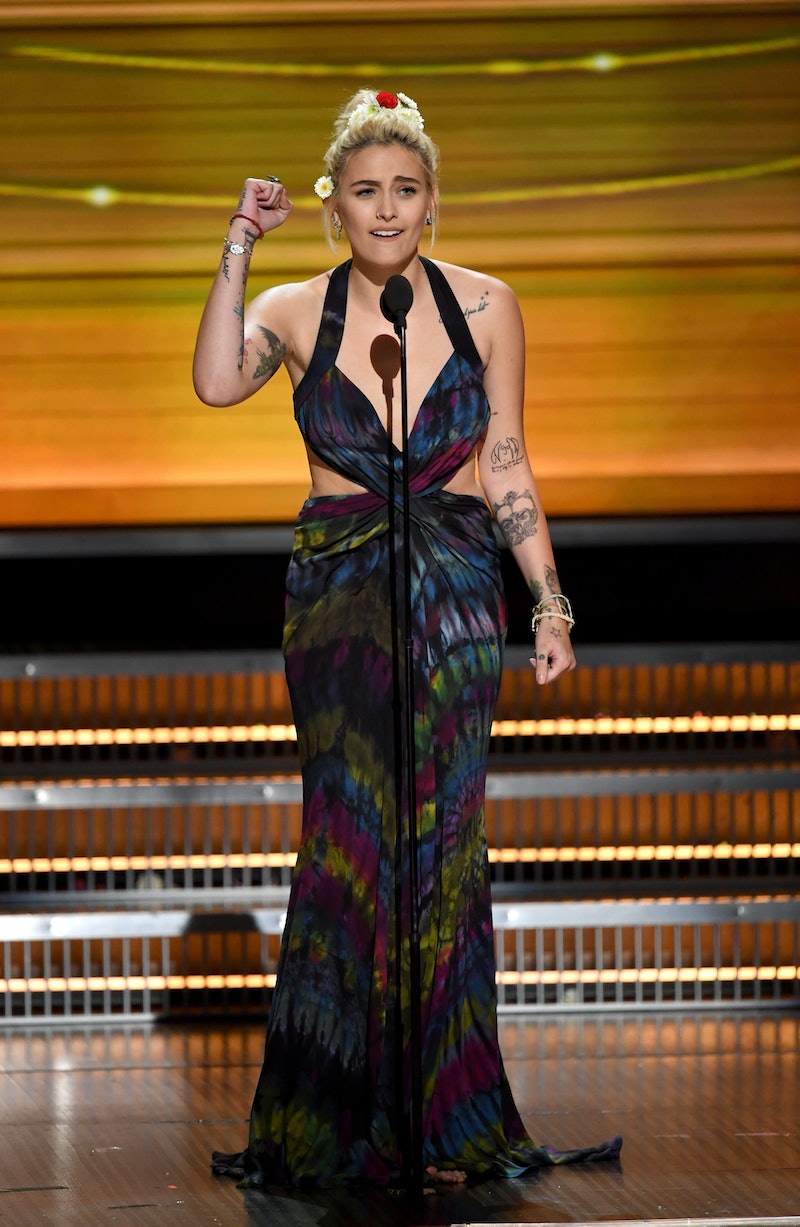 The show has barely started and many celebrities are already using the 2017 Grammy Awards as a political platform. As current events continue to challenge our country every day, many famous faces have joined in to advocate for those with lesser voices, and this year's Grammy celebration is most certainly the perfect setting for some of those issues to take center stage. In fact, producers of the annual ceremony actually encouraged artists to express their activism during their stage performances and presentations, producer Ken Ehrlich explained to Variety.

“One of the tenets of our show is artistic freedom, and over the years we’ve shown we do believe in it” “How many more times do we need to hear ‘I’d like to thank my publicist, my agent, my wife and kids.’ The great acceptance speeches are ones that have a point of view and are more personal.”

As it turned out, there were many political moments at the 2017 Grammys, both on the red carpet and during the actual show.

Things actually started to get political well ahead of the actual show, as singer Joy Villa made a shocking appearance on the red carpet in a dress emblazoned with the words,"Make America Great Again," which, of course, sent the entire the Twitterverse into a complete frenzy.

During his opening monologue, James Corden hit the crowd with an entertaining rhyme, taking a dig at the leader of the Free World: "With President Trump, we don't know what comes next."

3. Jennifer Lopez Calls For Artists To Work Together

J. Lo kicked things right off, presenting the first televised award of the evening. She set the tone for the ceremony as she quoted iconic novelist Toni Morrison when sharing her monologue with the audience. She began with some prophetic words of her own: "At this particular point in history, our voices are needed more than ever." She then continued with the words of Morrison,

"This is precisely the time when artists go to work. There is no time for despair, no place for self-pity, no need for silence, and no room for fear... we do language. That is how civilizations heal."

Following in her father's huge footsteps, Michael Jackson's daughter, Paris, had some words for the applauding audience about the current events taking place with the Dakota Access Pipe Line:

"We could really use this kind of excitement at a pipeline protest, guys, #NoDAPL!"

Katy Perry took the stage to perform her new song, "Chained To The Rhythm," donning what appeared to be a very Hillary Clinton-esque suit while revealing an armband with the word "persist" on her forearm and a Planned Parenthood pin. Before she ended her remarkable political display, Perry danced in front of a hologram of the United States Constitution and yelled out the words, "No Hate!" as she joined hands with co-performer, Skip Marley.

During her power acceptance speech for her iconic "Formation" video, Beyoncé touched on the issues of self-esteem and inequality.

"It's important to me to show images to my children that reflect their beauty, so they can grow up in a world where they look in the mirror, first through their own families, as well as the news, the Super Bowl, the Olympics, the White House, and the Grammys, and see themselves and have no doubt that they're beautiful, intelligent, and capable. This is something I want for every child of every race and I feel that it's vital that we learn from the past and recognize our tendencies to repeat our mistakes."

During her presentation at tonight's Grammys, Orange is the New Black star Laverne Cox pledged her support for Gavin Grimm, a 16-year-old who has been diagnosed with gender dysphoria. Cox encouraged viewers to Google the transgender high school student to learn more about his fight with the Gloucester County School Board, a case that is going to the Supreme Court in March of this year.

8. A Tribe Called Quest Stands For The People

Legendary rap group A Tribe Called Quest may have had what appears to be the biggest political display of the evening. Q-Tip opened the epic performance with a statement of solidarity for the many people who are being discriminated against in this country.

"Tonight, we represent you," Tip explained before going into an all out display of activism on the grand stage alongside fellow rappers Busta Rhymes, Anderson Paak, and Consequence. They ended the set by shouting, "resist," and referred to Trump as "President Agent Orange," protesting against the highly controversial "Muslim ban" while they kicked down a wall.

Recording Academy president Neil Portnow took the stage to touch on some of the many issues that are currently plaguing our country, while sharing a plea with the crowd to preserve music, i.e. the thing that binds us together.

Sunday night's Grammys, while obviously very entertaining, was about much more than music, and these moments definitely prove that.