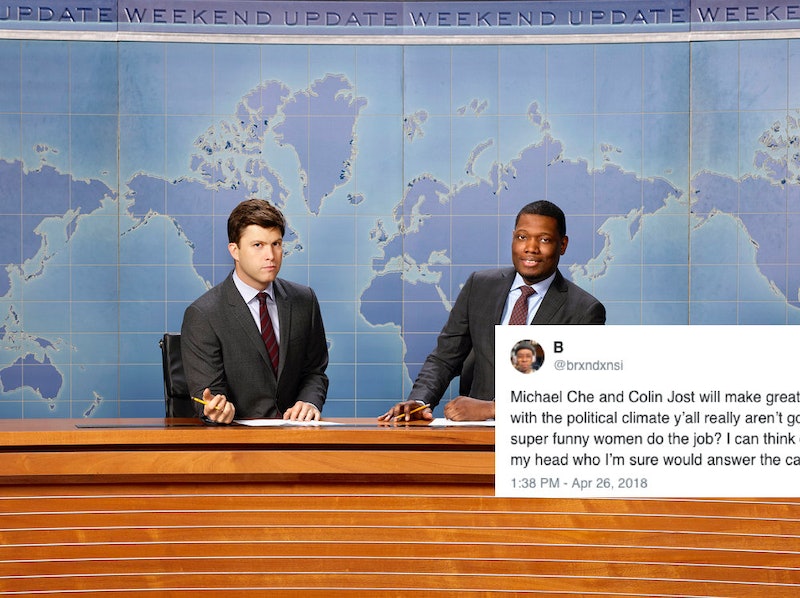 Saturday Night Live stars Michael Che and Colin Jost are stepping out from behind the Weekend Update desk to host the 2018 Primetime Emmy Awards. The choice drew immediate reactions from people online, and while some were excited, many pointed out that the choice of Che and Jost hosting highlights an award show gender disparity, which isn't necessarily exclusive to the Emmys, but award season in general. (Bustle reached out to NBC about the Twitter backlash, but did not receive an immediate response.)

"NBC is thrilled to be the home of this year’s Emmy Awards and with Colin and Michael in the driver’s seat as hosts, along with surprise appearances by other cast members of Saturday Night Live, I think we are in for one of the funniest awards shows in a long time," Robert Greenblatt, the chairman of NBC Entertainment said when the network announced the news, according to Variety.

Che and Jost also voiced their excitement for the award show, which will air in September and see the return of SNL bossman Lorne Michaels as executive producer, which he did previously in 1988. "We’re proud to be the first duo hosting the Emmys since Jenna Elfman and David Hyde Pierce, and somehow that’s a real fact,” Che and Jost said in a joint statement to Variety.

However, many Twitter users questioned NBC's decision not to ask a woman to host, or to include a woman as part of that duo.

One user @abrizzle009 pointed out that the last time a woman hosted the Emmys was when Jane Lynch hosted back in 2011, and @meganscullyusa noted, "4 women have hosted since 2000. 2 were Ellen. 1 was Heidi Klum and she hosted with 4 dudes. Get it together, Emmys."

Meanwhile, @NYRecessionista jokingly tweeted, "It’s too bad there are no funny women on SNL who could’ve hosted the Emmy’s this year." Some also voiced their fondness for Che and Jost, while pointing out the lack of female representation. As @brxndxnsi wrote,

"Michael Che and Colin Jost will make great Emmy hosts, but with the political climate y’all really aren’t gonna have some super funny women do the job? I can think of 10 off the top of my head who I’m sure would answer the call."

As the Emmys air on NBC, the host is typically someone associated with the network, but there are plenty of women who could have been selected, from the female cast members of SNL to stars of shows like The Good Place and Great News.

This disparity is not limited to award show hosts, but includes nominees and other women working in the entertainment industry. A study by San Diego State University’s Center for the Study of Women in Television and Film found that of the 250 top-grossing films in 2016, only 7 percent were directed by women, a 2 percent drop from the previous year. That year, women also comprised just 24 percent of producers, 17 percent of editors, 13 percent of writers, and just 3 percent of film composers.

And while there has been some progress — in January Greta Gerwig became the first woman nominated for an Oscar on her directorial debut Lady Bird — there is much work to be done. In fact, as Refinery29 reported, asking women to host award shows may even be good for ratings. While the numbers fluctuate, in 2013 when Amy Poehler and Tina Fey hosted the Golden Globes, the show saw its highest numbers in six years, and Ellen DeGeneres helped the Oscars reach its largest audience in a decade when she hosted in 2014.

There is a potential upside at least: According to Variety, the Emmys will feature appearances from other SNL cast members, giving the award show an opportunity to balance the scales. SNL's current female cast members include players like Kate McKinnon, Leslie Jones, Aidy Bryant, and more. However, viewers won't know for sure whether these women will be involved until the show airs on Sept. 17.