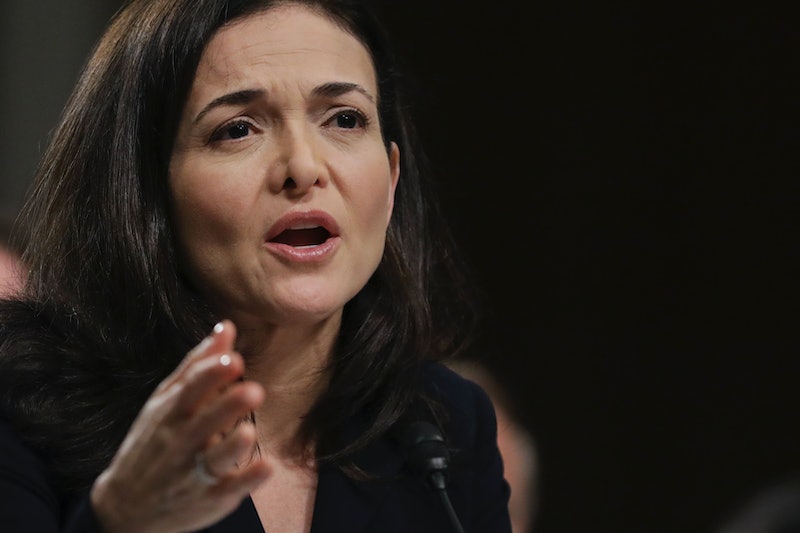 On paper, numerous companies have promised to advance gender equality behind their doors. When it comes to actually change, though, the progress is really lagging behind the promises. According to the Women in the Workplace 2018 report, there are numerous concrete steps that companies can take to spur the process forward.

"Conventional wisdom is that women hit a glass ceiling, and that's where a lot of organizations continue to focus — at more senior levels in the pipeline," Rachel Thomas, the president of Lean In, one of the two organizations behind the report, tells Bustle. "The reality is, women never get out of the gate."

The report is the work of Lean In and McKinsey & Company, and they've been publishing it annually since 2015 with the aim of educating companies and professionals on how they can commit to gender equality. This year, though, the report, which bills itself as "the largest comprehensive study of the state of women in corporate America," had one particularly troubling conclusion: no matter how many companies have said that gender equality is one of their goals, the progress towards that goal has actually stalled.

"It's a surprise," says Thomas. "There's just been so much conversation about how important diversity is, and gender diversity is ... the question is, why are we making so little progress?"

Using data from 279 companies that employ over 13 million people, the report was able to answer at least part of that question. It mapped the "corporate pipeline," or the rate at which various groups of people get promoted up the ladder in their companies.

Despite the fact the women are now earning bachelor's degrees at a higher rate than men, according to the National Center for Education Statistics, the report says that out of every 100 entry level jobs available, men get 52, and women get 48. As women climb up the corporate ladder, then, their chances get even worse. The biggest problem that Thomas sees with the report's data is at just the next level up: the promotion to manager-level. Women only get 39 out of every 100 promotions to manager — and that makes every successive promotion more difficult. Once you get all the way to the C-suite, men hold 77 percent of positions, according to the report.

Fewer promotions for women isn't the only problem they face in trying to advance their careers. Other workplace obstacles, like facing sexual harassment and microaggressions at a much higher rate than men, also slow them down. Overall, 64 percent of women said that they experience microaggressions on a regular basis, the report showed — with even higher rates for gay women and women of color. Women also get less support from their managers than men do, according to the report, and the men who they work with mostly don't notice the problems they're facing.

If you're a woman of color, then your chances of getting to the top are significantly worse. Thomas notes that women of color, in particular black women, face a much more difficult path up the ladder at pretty much every step along the way. Whereas white women get 27 percent of all promotions to the manager level, women of color only get 12 percent. Once you get all the way up to the C-suite, white women get 19 percent of available positions — and women of color get only four, according to the report. It also documented the particular barriers that women of color face along the way — higher rates of sexual harassment, for example, and less attention from managers — which strongly contributes to the low number of promotions they receive.

While these are unpleasant statistics to see, Thomas that says she hopes women of color reading it will feel validated in terms of the barriers they face in the workplace. Some, Thomas says, may wonder if the problem is imagined, or if it's just them — but it's not.

"Too few companies are really treating diversity like a business priority," Thomas tells Bustle. "We really need to see a mindset shift from diversity as a nice-to-have, to diversity as a must-have."

The report doesn't just enumerate out the problems, though. It also lists specific solutions that companies can take to actually act on that commitment to gender diversity. To Thomas, the most important concrete step that companies take is to even out promotions to the manager level — because even missing out on that one step is enough to put women behind for the rest of their careers.

And to women just starting their careers, Thomas also has some advice.

"Play healthy head games. The young guy that's competing with you, he thinks he can get that job, and he's going to apply for it," Thomas says. "So if you're not sure you can, who cares? Throw caution to the wind and throw your hat into the ring."