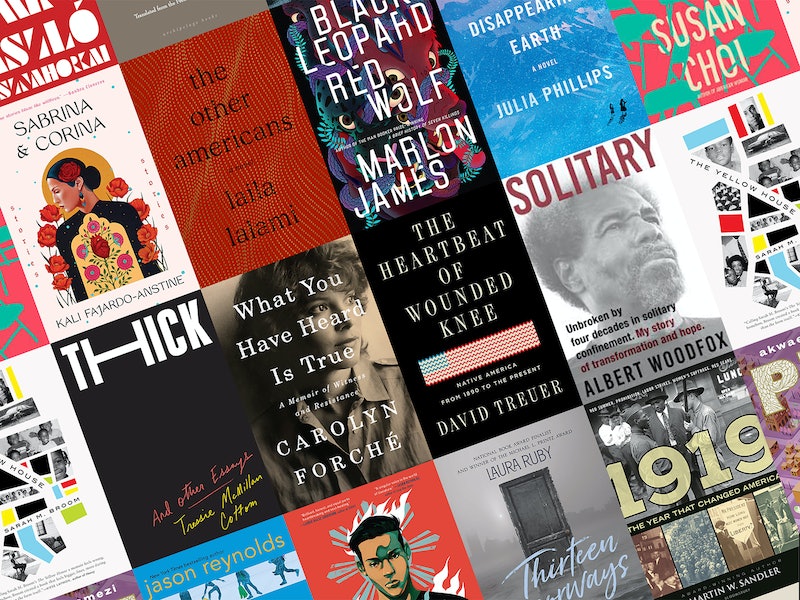 In the world of literature, autumn is Oscars season, when all the medals are distributed and the awards are won. On Tuesday morning, the National Book Foundation kicked-off the season (which continues with the Nobel Prize in Literature announcement later this week, and the Booker Prize announcement next week) with the announcement of the 25 finalists for the 2019 National Book Awards. There are five nominees in each of the five categories — fiction, nonfiction, young people's literature, poetry, and translated literature — and the winners will be announced on Nov. 20 in a ceremony in New York City.

Established in 1950, The National Book Awards are among the most prestigious prizes that can be bestowed upon an author in the United States. In recent years, the awards have been given to esteemed literary figures like Ta-Nesisi Coates, Colson Whitehead, Jesmyn Ward, Louise Erdrich, and Patti Smith. Last year, Elizabeth Acevedo and Sigrid Nunez were among the 2018 National Book Award winners.

This year, the finalists include beloved authors like Susan Choi, Marlon James, and Laila Lalami, as well as new names like Kali Fajardo-Anstine, Sarah M. Broom, and Tressie McMillan Cottom. As you scroll through, you may also notice these shortlists are wonderfully diverse — a true reflection of the United States and its people. Here are the finalists for the 2019 National Book Awards:

Susan Choi's latest work is a novel-within-a-novel that begins with the story of the high school drama students of Mr. Kingsley and the "trust exercise" he asks them to perform and takes a number of dramatics twists-and-turns from there.

In 11 short stories, Kali Fajardo-Anstine tells the stories of the women so often overlooked by mainstream media: Chicana women with roots to the Southwest that stretch back hundreds, if not thousands, of years. In an interview with Bustle, Kali Fajardo-Anstine said, "I always was a reader, but it wasn’t until I started reading Julia Alvarez and Sandra Cisneros in high school that I really felt like it was possible for someone like me to become an author. I loved literature, but it didn’t seem like literature was a space that was welcoming to me, a Chicana from the Southwest who is mixed."

Booker Prize winner Marlon James turns his talents to fantasy in a novel, the first in a series, that has been described as the African Game of Thrones.

The Other Americans by Laila Lalami

From Pulitzer Prize finalist Laila Lalami comes a story about a Moroccan immigrant whose unexpected, tragic death reverberates throughout his community and beyond.

Julia Phillips transports readers to the farthest corner of the planet, a peninsula on the northeastern edge of Russia where two girls have gone missing.

Sarah M. Broom's memoir examines New Orleans, her hometown, in all its complexities and nuances. In an interview with Bustle, Broom said, "Ultimately in the book I’m trying to get at the ways in which we can have stories that are devoid of this nuance, which gives the texture of a place. I want to be able to say: I’m from New Orleans, and it’s a great city, and I know how to second line, but also, there’s all of this dysfunction that we need to somehow resolve."

Tressie McMillan Cottom makes her debut with the searing essay collection Thick about being thick, being Black, and being excluded from conversations about beauty, money, and more.

What You Have Heard Is True by Carolyn Forché

Poet Carolyn Forché recounts her 27th year, when she travels to El Salvador with a mysterious stranger, who takes her into the heart of the country — in all its beauties and dangers.

The Heartbeat of Wounded Knee by David Treuer

Ojibwe writer David Treuer tells the real history of Native life in the United States in the years since 1890, when 150 Sioux died at the hands of U.S. armed forces.

Albert Woodfox spent over 40 years in solitary confinement at the notorious Angola prison in Louisiana for a crime he did not commit. During that time, he spent 23 years per day, every day inside his tiny cell. In Solitary, he writes of surviving that experience.

In Pet, Akwaeke Emezi gives readers a trans protagonist in the form of Jam, who sees monsters no one else can see and everyone denies exist at all.

Look Both Ways by Jason Reynolds

Beloved young adult and children's author Jason Reynolds weaves a tale of life and the many directions it can take through 10 stories (one per block) of a walk home from a school.

Patron Saints of Nothing by Randy Ribay

Randy Ribay's novel centers on Jay, whose plans to spend the last summer before college playing video games are detoured when his cousin is murdered and he travels to the Philippines to discover what happened.

Thirteen Doorways, Wolves Behind Them All by Laura Ruby

1919 The Year That Changed America by Martin W. Sandler

One hundred years ago, the United States faced many of the same issues that plague the country today: Racism, sexism, classism. In 1919 The Year That Changed America, Martin W. Sandler shows children why understanding history is essential to changing the present.

The Tradition by Jericho Brown

Jericho Brown — one of Twitter's favorite poets — writes of blackness, queerness, and more in his third collection.

"I": New and Selected Poems by Toi Derricotte

In Toi Derricotte's collection, she shows readers the journey she embarked upon in search of greater truths about race, sexuality, gender, and more.

A narrative in poems, Dear Republic centers on the townspeople of a politically-fraught, occupied country as they figure out how to challenge their new world order.

Be Recorder by Carmen Giménez Smith

Like Deaf Republic, Be Recorder is a call-to-action, a scream to fight against complacency as the world burns.

In his 10th collection, Arthur Sze plays with form to challenge how you see the world.

Translated from the Arabic, Death is Hard Work is an account of the Syrian civil war, through the eyes of three ordinary people.

Translated from the Hungarian, Baron Wenckheim’s Homecoming follows the Baron as he returns to his hometown after escaping his debts in Buenos Aires, where he lived in exile.

The Barefoot Woman by Scholastique Mukasonga, translated by Jordan Stump

Translated from the French, this memoir is the story of the author's mother, who did everything she could to protect her children from the Rwandan genocide.

The Memory Police by Yoko Ogawa, translated by Stephen Snyder

Originally published in Japanese in 1994, The Memory Police is more relevant than ever — and available in English for the first time. The novel is set on an island where objects — then concepts — disappear from the collective understanding.

Translated from the Finnish, Pajtim Statovci's novel follows two friends, Bujar and Agim, who move from Communist Albania to Italy in search of a place where they feel more at home — in their environment and their bodies.