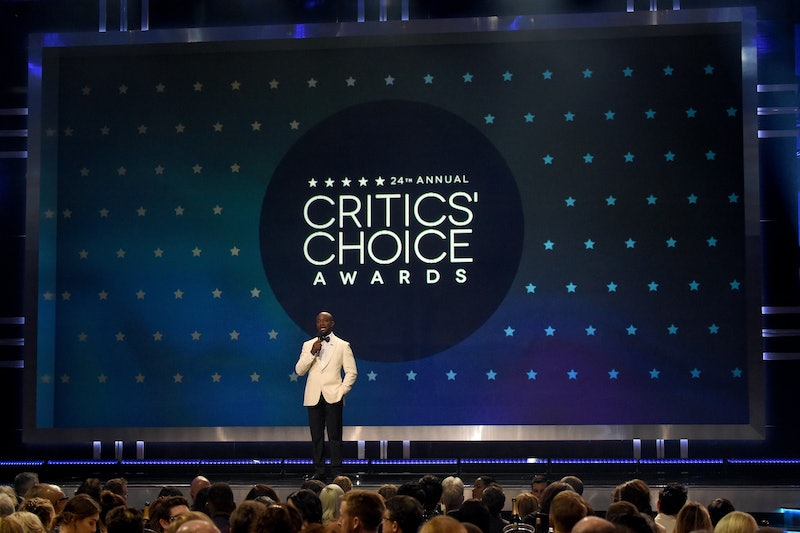 If the Oscars and the Golden Globes represent two extremes of the hosting debate this year, with the former going host-less to avoid controversy and the latter courting controversy by inviting back known provocateur Ricky Gervais, the selection of 2020 Critics' Choice Awards host represents a happy middle ground. If you tuned in to the ceremony (which honors the best in both film and television across a whopping 42 categories) last year — or if you're a Shondaland acolyte — you'll probably recognize the man emceeing the event. That's because actor Taye Diggs is returning to host for the second year in a row.

In 2019, Diggs took over hosting duties from The Newsroom star Olivia Munn. Other Critics' Choice Awards hosts over the years have included footballer-turned-TV host Michael Strahan, comedian and The Talk host Aisha Tyler, and Broadway legend Kristin Chenoweth. Like Chenoweth before him, Diggs comes to the screen with a background in musical theater. He got his start on the Great White Way in 1996, originating the role of Benny in the smash hit Rent. (That's where he met his future wife Idina Menzel, who stars in two movies nominated by the Critics' Choice Awards this year, Best Picture nominee Uncut Gems and Best Animated Feature nominee Frozen II.) Diggs' other Broadway credits include The Wild Party, Chicago, Wicked, and Hedwig And The Angry Inch.

Diggs made his feature film debut in 1998, co-starring as Angela Bassett's love interest in How Stella Got Her Groove Back; his other film roles include the screen adaptations of Chicago and Rent, The Best Man and its sequel The Best Man Holiday, and the recent Netflix romcom Set It Up. On TV, he has appeared in episodes of The Good Wife (which fellow Critics Choice Awards host Chenoweth also guest starred on), Empire, Will & Grace, and Private Practice, on which he starred as Dr. Sam Bennett in all six seasons of the Grey's Anatomy spinoff.

Diggs' experience onstage and playing towards a massive live audience is an advantage when it comes to the tricky task of hosting, a fact that Diggs acknowledged last year in advance of his first gig. "It's a natural fit­ — it's humor, dancing, singing," he told The Hollywood Reporter while preparing for the 2019 ceremony. "It's something I had been looking to do for a while now, so it's nice that it's working out the way it is."

Last year, Diggs kicked off the ceremony with a song-and-dance tribute to diversity in Hollywood. Over the next few hours, top prizes would go to Roma, a film about an indigenous Mexican maid, in Best Picture and Best Director, as well as to actors and films like Mahershala Ali, Regina King, Black Panther, If Beale Street Could Talk, and Crazy Rich Asians.

Coming so soon after the recent #BAFTAsSoWhite controvery — in which the British Academy of Film and Television Arts nominated only white actors in its 20 Best Acting slots and only men in its five Best Director slots — that spirit of inclusion will once again be much-needed when the Critics' Choice Awards air on Sunday, and hopefully Diggs will be able to find away to celebrate and highlight the importance of representation once again. Fortunately, the Broadcast Film Critics' Association got things off on the right foot by nominating a lot of performances that BAFTA overlooked, including Eddie Murphy, Awkwafina, Cynthia Erivo, Lupita Nyong'o, Jennifer Lopez, and Zhao Shuzhen, as well as Greta Gerwig in Best Director.

Which film will follow Roma as this year's Critics' Choice Award winner for Best Picture? And will that film, unlike Roma (which fell to Green Book), be able to follow that victory up with a win at the Oscars? Find out when Taye Diggs and his thousand-watt smile host the ceremony on Sunday, Jan. 12, broadcast live on The CW.

More like this
Brendan Fraser's Emotional Critics Choice Awards Speech Is Total Tearjerker
By El Hunt
11 Stunning Critics' Choice Awards Beauty Moments
By Audrey Noble
Pamela Anderson’s Dating & Marriage History Could Be Its Own TV Series
By Jake Viswanath
At 28, Rosie Perez Risked Her Career To Stop Playing Stereotypes
By Gabrielle Bondi
Get Even More From Bustle — Sign Up For The Newsletter
From hair trends to relationship advice, our daily newsletter has everything you need to sound like a person who’s on TikTok, even if you aren’t.