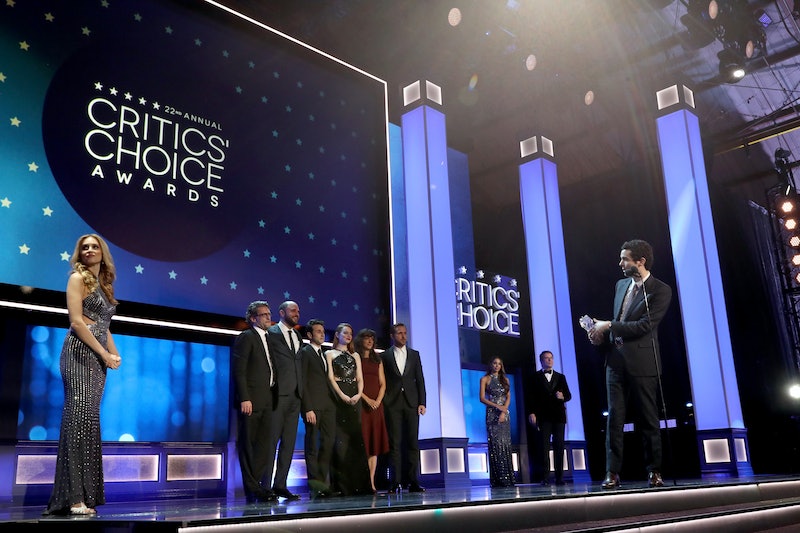 Earlier this month, the 2019 Golden Globes officially ushered in awards season. And the race continues on Sunday, Jan. 13, with the Broadcast Film Critics Association handing out its own set of trophies. But who's hosting the 2019 Critics Choice Awards?

The Academy Awards have obviously been beset by their own controversy surrounding now ex-host Kevin Hart, and the Globes' delightfully mismatched hosting duo of Andy Samberg and Sandra Oh was met with either applause or shrugs depending on who you asked. With awards show emcees being such a hot topic, who has the BFCA tapped to oversee their ceremony?

Fortunately, the proceedings should be in good hands, since the BFCA has chosen someone with 1) a face TV and film fans will recognize, 2) proven experience onstage in front of huge audiences, and 3) plenty of charisma to spare. Early in January, it was announced that the critics group had hired TV, film, and Broadway star Taye Diggs to host the awards, and it's hard to think of a better choice of person to carry the weight of a telecast with charm and grace.

Diggs got his start on the stage, playing the role of landlord Benny in the original 1996 Broadway production of Rent — a role he would later reprise in the 2005 feature film adaptation of the show. He would go on to appear on and off Broadway in popular musicals such as The Wild Party, Chicago, Wicked, and Hedwig And The Angry Inch. He made his debut on the big screen starring opposite Angela Bassett in 1998's How Stella Got Her Groove Back, and has since starred in movies like Brown Sugar, Chicago, and The Best Man Holiday in addition to Rent.

On the small screen, viewers will undoubtedly be most familiar with Diggs from his six-season starring role on ABC's Grey's Anatomy spinoff Private Practice, on which he played dreamy surgeon and founder of Oceanside Wellness Group, Dr. Sam Bennett, aka Dr. Feelgood. Since that series ended, Diggs has also starred on TNT's Murder In The First, recurred on CBS' The Good Wife, and guest starred on FOX's Empire.

Diggs takes over hosting duties from The Newsroom and The Predator star Olivia Munn, who helmed the ceremony last year. As emcee of the Critics Choice Awards, Diggs will oversee the handing out of awards in 42 categories across film in television, all voted on by the organization of television, radio, and online reviews known as the BFCA.

Last year, the Critics Choice Awards correctly presaged the eventual Best Picture Oscar winner The Shape Of Water, while many other groups — including the Golden Globes and the Screen Actors Guild — were giving their top prizes to Three Billboards Outside Ebbing, Missouri. The BFCA also gave trophies to all four Oscar acting winners and both screenplay winners; in fact, out of the 18 Critics Choice categories that have analogous Oscar categories, the BFCA correctly chose the eventual Academy Award winner in all but two of them.

So whether you're tuning in for a charismatic host or for predictive Oscar wins, the 2019 Critics Choice Awards should be a smashing success for everyone… except the losers, of course.